Frustration Mounts Over COVID Test Lines, Delays in NYC; No Decision Yet on NYE

Mayor Bill de Blasio said no decision had been made on banning people from the annual ball drop celebration, even as one broadcaster said it was canceling its live broadcast because of omicron concerns

Mayor Bill de Blasio said no decision had been made on banning people from the annual ball drop celebration, even as Fox said it was canceling its live broadcast because of concerns about the omicron variant.

“The preference is to keep it on, it’s an important event for the city,” de Blasio told MSNBC, adding that revelers would have to show vaccination proof and that officials were weighing other precautions. Omicron Less Likely to Put You in the Hospital, Studies Say 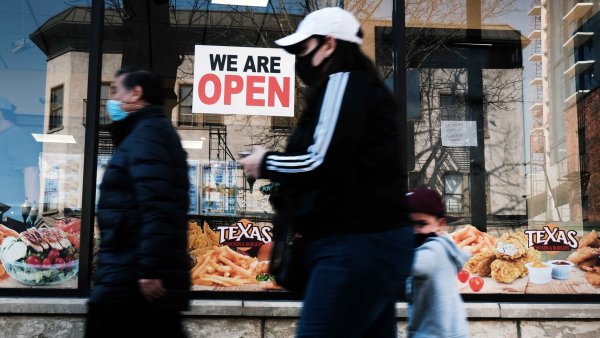 Cases are also rising on Long Island, in the mid-Hudson Valley and in central New York counties such as Tompkins County, where Cornell University has faced an outbreak. Still, because of widespread vaccination, hospitalizations and deaths from the virus are far fewer than at the pandemic's height, or even during a holiday-period surge last winter.

New York hospitals are up to 4,452 patients as of Tuesday — up 18 percent from the previous Monday. That's below the more than 6,000 patients who were hospitalized in mid-December 2020.

Dr. Mitchell Katz, CEO of the city’s hospital system, said the 11 city-run hospitals had a total of 54 COVID-19 patients in intensive care as of Wednesday — up from 20 a few weeks ago, but a mere fraction of the 970 ICU patients at the peak in March 2020.

De Blasio said the city was opening seven additional testing sites Wednesday, increasing its total to 119, and will set up five distribution sites — one in each borough — on Thursday to hand out at-home rapid COVID-19 tests, which have been hard to come by at pharmacies. The locations of the distribution sites are:

As COVID-19 cases surge fueled by the highly contagious omicron variant, families around the country are reconsidering their plans for the holiday. LX News Now host Eric Alvarez asks Harvard Medical School’s Dr. Aditi Nerurkar the question on everyone’s minds: Should I be canceling my Christmas and New Year’s Eve plans?

The news of more city-run testing sites came as CityMD, the privately run chain of urgent care clinics, said it was temporarily closing 13 city locations “to preserve our ability to staff our sites.” CityMD has seen testing lines wrapping around city blocks and wait times of several hours, as they have become overwhelmed with testing requests.

The CityMD location in Kingsbridge was not one of the shuttered locations, but did turn some people away who were looking for COVID tests on Wednesday.

"They told me they were closed, and I have to come tomorrow about 6:30, 6 in the morning, and make the line in order to be seen," said Raymond Polanco.

Others waited in the physical line, just to be given a place in a virtual line. A broken system for many who simply want to get the test and results before Christmas (the latter of which may be a pipe dream at this point).

"It's been more than nine hours waiting for them to send me a text message. I said, 'What happened?' And they gave me a link, but the link didn't work, she said that it crashed," said Rosa Delanuez. "I just wanted to know because I really need to get the test done."

Team coverage of the fight to contain the omicron variant of the coronavirus. Andrew Siff, Greg Cergol, Brian Thompson and Gus Rosendale have team coverage.

Senate Majority Leader Chuck Schumer, who joined de Blasio at his news conference Wednesday and was honored with a key to the city, said he's asking the federal government to send the city 100 mobile testing sites.

Many in the city are fed up with the long lines outside of testing centers, many of which stretch down multiple blocks, as well as the increased wait times for results — both products of a heavy increase in demand compared to the autumn months.

There was some relief in Jackson Heights on Wednesday, where the first federally run testing site was up and running. It had one of the shortest testing lines around, as compared to lines at Elmhurst Hospital, which featured hours-long waits.

New testing locations are set to open at Travers Park in Jackson Heights, Queens Valley Playground in Flushing, and Helen Marshall playground in East Elmhurst. Testing and vaccination booths will also be set up at some subway stations as well, the governor said, including the Grand Central and Times Square stations starting Monday.

"Many places are having long lines. We are trying to eradicate that by putting tests right where the people are," Gov. Kathy Hochul said.

The frustrations also come as New York Attorney General Letitia James has, for the second time in a week, sent a letter to a COVID testing facility ordering them to stop giving misinformation when it comes to the test turnaround time. James' warning letter to Labworq LLC — which has dozens of testing sites across NYC — states that the company advertises turnaround times of less than 24 hours, when in reality the attorney general's office has received complaints about wait times longer than five days for results.

The letter follows a similar one James sent to LabQ on Monday, demanding the company make changes to its website and signage about wait times, and to inform those using their tests of realistic wait times.

New city measures to curb the spread of COVID-19 have also been enacted, including a requirement for police officers to wear masks indoors and outdoors when interacting with the public. The NYPD has a vaccine mandate, but officers are still getting sick — with about twice as many out Tuesday as on an average day.

Public hospitals will also be restricting visitation, with no visitors allowed except for labor and delivery, pediatrics, patients with developmental disabilities and end-of-life cases. Proof of vaccination or a negative COVID test within 48 hours of the visit will be required.

Even a Christmas staple was imperiled by the spike, as the New York City Ballet canceled its performance of “The Nutcracker” through Monday, citing “a number of" breakthrough infections in the production. That's in addition to the Radio City Rockettes' Christmas Spectacular ending its season on Monday, and more than a dozen Broadway productions having to cancel at least some performances.

The city is also temporarily limiting visitation at city-run hospitals, with exceptions for pregnant people, children and hospice patients, and moving from in-person visits to televisits at city jails, where the COVID-19 positivity rate has soared in the last 10 days from 1 percent to 17 percent.

Jail Commissioner Vincent Schiraldi sent a letter Tuesday asking judges to consider alternatives to incarceration, writing that all indications suggest inmates face “an equal or greater level of risk” as at the start of the pandemic.

According to Schiraldi, just 45 percent of city inmates have gotten one dose of the COVID-19 vaccine, and only 38 percent are fully vaccinated. In comparison, at least 90% of city adults have received one dose and more than 82 percent of adults are considered fully vaccinated.

But north of New York City, hospitalizations are climbing in rural, central New York communities that are seeing more patients than this time last winter: Columbia County reports 26 patients, more than double the number in mid-December 2020.