Are they making a difference?

New COVID restrictions were imposed in several New York City and Mid-Hudson region neighborhoods last week — the most severe new rules in months for some — to help curb the spread in cluster areas that were seeing soaring positivity rates.

Mayor Bill de Blasio said in his daily briefing Tuesday that there were some indications the case surges were beginning to level off — the positivity rate in the hotspots hasn't been consistently increasing and the citywide seven-day rolling infection rate hasn't spiked further. That said, both he and Gov. Andrew Cuomo caution more testing over more days is needed to determine a potential trend.

De Blasio said the city should have a fairly solid idea by the end of this week if the new measures are helping and whether the restrictions could be relaxed after their 14-day minimum implementation period. That will be decided with the state.

"This is a decisive week in a battle against the coronavirus. This is a week where we can start to turn the tide and contain the problems we're seeing there," de Blasio said. "I fundamentally believe we can stop this from turning into a second wave in New York City."

In a later interview with CNN, the mayor said the city is in a better position now than it was just last week.

"We are not out of the woods, but something is starting to work and people are coming out and getting tested in much bigger numbers, and that's a crucial piece of the equation," de Blasio said.

The previous evening, the mayor told NY1 this cluster period marks "the first time we’ve had to deal with the danger of a full-blown resurgence." But the issues are highly specific to small areas; the new restrictions are an effort to contain them.

Cluster areas are chiefly responsible for the surge in hospitalizations, with the state attributing about 70 percent of the increase in daily admissions from early September until Tuesday to those places. The city remains precariously close to previously established thresholds for closing, like the 550 mark for daily average cases that the mayor identified for rolling back some reopenings. The city's percentage of positive cases also is just under 2 percent, the mark that would close indoor dining.

Cuomo unveiled the restrictions for clusters in Brooklyn, Queens and Rockland, Orange and Broome counties. They apply to varying degrees based on a color-coded scheme that assesses risk by geographical proximity to the cluster. The governor has said he remains hopeful the restrictions will curb the outbreaks.

The overall numbers in those areas went up a bit from Monday, with the positivity rate climbing from 3.7 percent to 4.13 percent Tuesday — but those are still down from a 6.13 percent average last week and 6.91 percent the week before that (meanwhile, the positivity rate in all others parts of the state was at 1.2 percent, according to the governor's office). As the mayor said, this week will be telling.

Despite protests, he has defended the crackdowns, which have thus far resulted in citations amounting to nearly $200,000 in fines, in the name of public health.

"It's never something you want to do...but people have to see there are consequences," de Blasio said Tuesday evening. "And hopefully by showing that that is a real possibility, the vast majority of people are never going to get to the point where they need a fine."

Fines from violators of New York's new restrictions on mass gatherings totaled at least $150,000 by Sunday afternoon, according to the City of New York. NBC New York's Anjali Hemphill reports.

The governor has faced a series of lawsuits over the restrictions, which ban mass gatherings in red shaded areas, switch schools all-remote, shelve indoor dining and reinstate capacity restrictions for houses of worship. In all cases thus far, judges have sided with the state and its public health interests argument.

"Our numbers overall continue to remain steady, despite the micro-clusters that have popped up in certain pockets of the state. Our strategy is to continue to identify these clusters if and when they pop up, get even more refined in our targeting and attack them as needed," Cuomo said Tuesday.

While some communities say they've been unfairly targeted, Cuomo argues the restrictions are data-driven and apply only to areas that, in his view, flouted COVID protocols and allowed the clusters to form -- and spread -- in the first place.

His restrictions are much narrower geographically than the more sweeping ZIP code-based shutdowns that de Blasio had initially proposed. 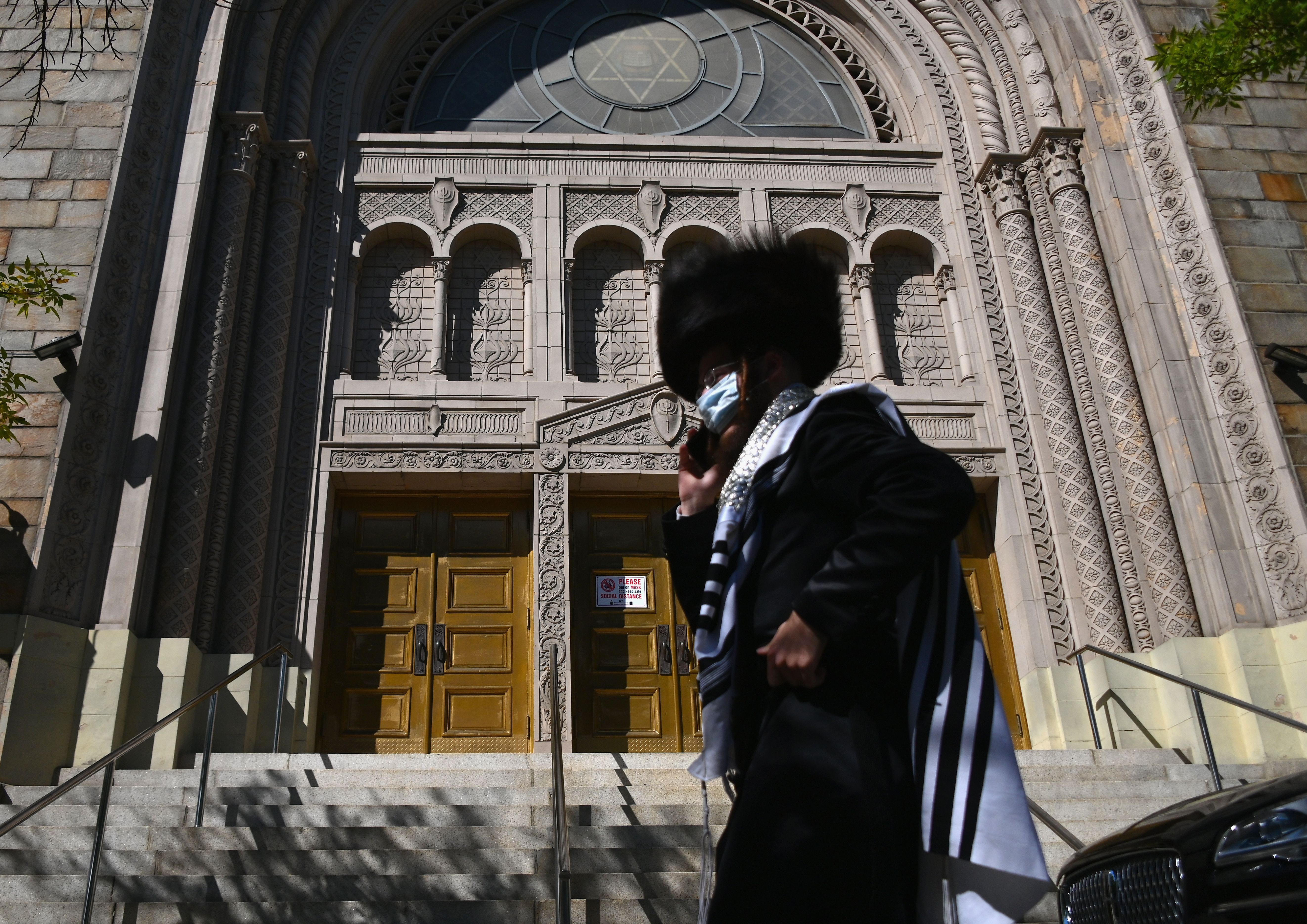 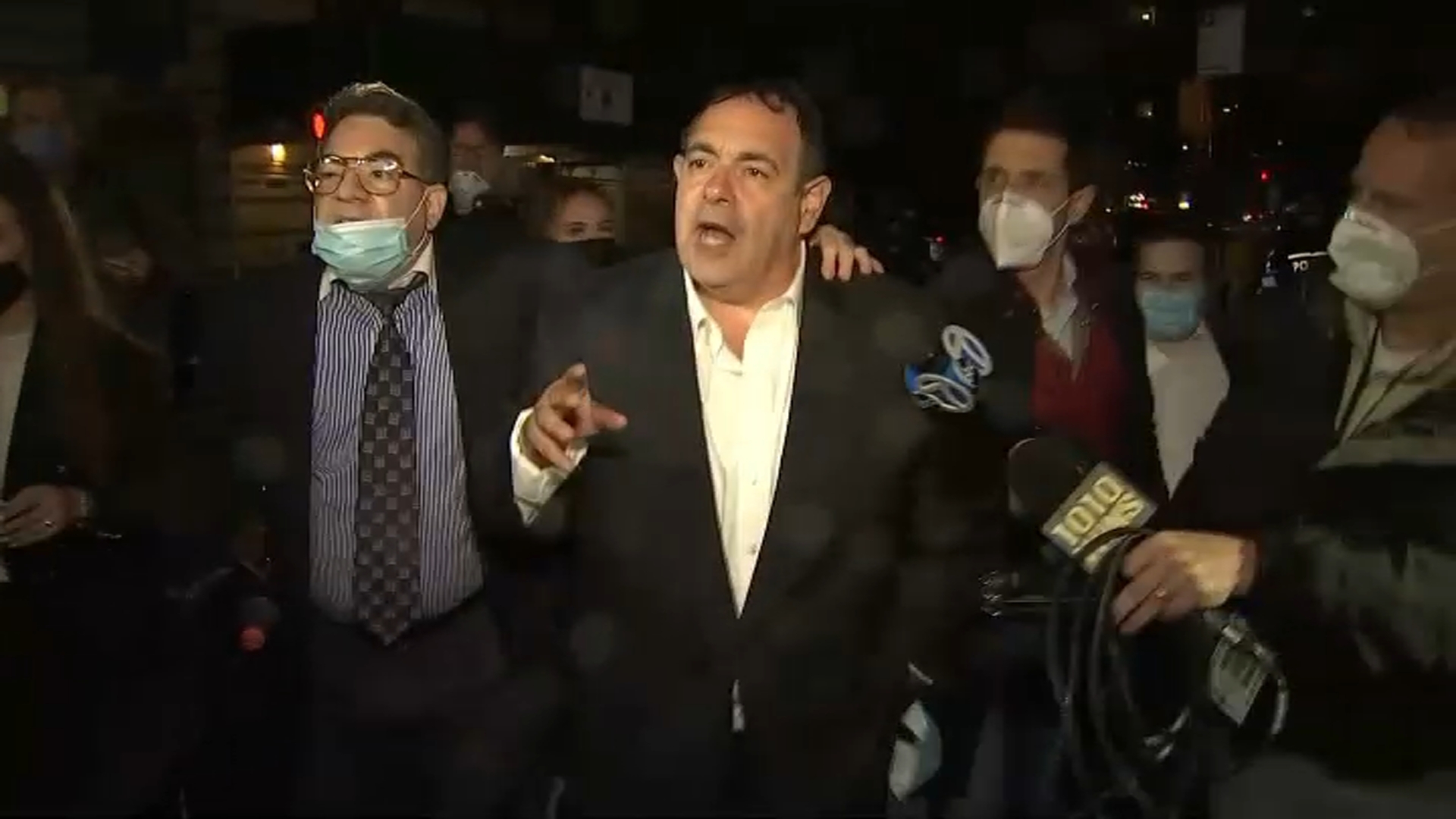 "We're closing down areas that are about one or two square miles, right? These are tiny areas. But we have that kind of data," he added. "And if you can target that way and close down small areas, then it's not inevitable that the spread gets so large that you would have to close down an entire city or a state."

The new slate of rules will remain in place for at least 14 days from the date of implementation, which was Thursday in New York City. They could be in effect for a longer period of time, depending on the trends in positivity rates. Heavy fines apply for noncompliance. Since Friday, the city says enforcement officers have issued dozens of summonses and at least $172,000 in fines. The biggest penalties -- up to $15,000 a day -- were doled out to religious institutions in Borough Park for holding gatherings of more than 10 people and over parties.

While the clusters have unnerved New Yorkers to a degree many haven't been in months, the overall statewide and citywide infection rate remains low. Excluding 20 hotspot ZIP codes, Cuomo says the statewide rate has been between 0.84 percent and 1.02 percent on any given day over the last week or so, while the seven-day rolling average is 1.1 percent for both the state and city, by state data.

Even without the clusters, Cuomo had warned it may be impossible for New York state to sustain its low infection rates through fall. Fall means chillier weather, which means more indoor activities. It means flu season. It means schools -- if they can manage to safely stay open. Public schools across the state have reported more than 1,400 teacher and student positivites since Sept. 8, which was well before in-person learning returned in New York City. Since Sept. 1, state labs have reported nearly 3,800 positives among children ages 5 to 17, though there may be some duplication between lab reports and the data reported by schools.

New York City schools have reported more than 300 cases from on-site transmission in schools, though Friday's first day of mandatory testing in yellow school zones yielded just one, at a high school in the Bronx. De Blasio described those results, which came of more than 1,750 tests across 50-plus schools, as highly encouraging.

"It did take us a few weeks to get the school year going, but now it's going full bore all over the city. You know, we have 1,600 schools and except for some temporarily closed in those particular zones, the vast majority are up and running, and running well," the mayor said. "So, the schools have been a positive point ... We're getting overwhelmingly good results from testing in schools."

New Jersey has confirmed at least 16 separate public school outbreaks and nearly 60 cases as of Gov. Phil Murphy's last report. Murphy, who has battled upticks in Ocean and Monmouth counties, said that "everything is on the table" when asked about potentially tightening restrictions.

Like New York, New Jersey has seen some of its highest new daily case totals and hospital admissions in months in recent days. Connecticut is also facing its highest COVID hospitalizations since June, though the 172 as of the state's last report is much lower than the neighboring tri-states' totals. As of late, Fairfield County has consistently had one of the highest hospitalization levels among all the counties in the state.

At the same time the tri-state governors combat new upticks at home, they face the ongoing threat from out-of-state travel. The COVID numbers are once again increasing nationally and globally. America reported its highest daily case number in nearly two months on Friday, which was the same day the World Health Organization reported a new daily case record worldwide.

A 'full blown' second wave is sweeping across European countries and capitols, with places like Italy recording the highest single day spike since March, France setting an all-time high for new cases this weekend and Spanish capital Madrid in a state of emergency. Boris Johnson, the Prime Minister of the UK, said cases had "quadrupled."

The 14-day tri-state quarantine advisory first jointly announced by Cuomo, Murphy and Connecticut Gov. Ned Lamont in late June to stem the out-of-state tide remains in effect. It requires travelers from viral U.S. hotspots -- defined as states or territories with a 10 percent or higher positivity rate on a weekly rolling basis -- to isolate for 14 days before entering the tri-state area. The same rules apply for tri-state residents who travel to one of the hotspots and then return home.