Pointing accusingly at climate change, President Joe Biden toured deadly flood damage in New Jersey and New York City Tuesday and said he was thinking about the all families who suffered “profound” losses from the powerful remnants of Ida.

Biden first toured Manville, New Jersey, a community devastated both by fires and floods. Later, he visited Queens, which lost nearly a dozen people, including a toddler, to Ida's rapidly rising waters and is expected to call for federal spending to fortify infrastructure to better defend people and property from such future storms.

“Every part of the country, every part of the country is getting hit by extreme weather,” Biden said in a briefing at the Somerset County emergency management training center attended by federal, state and local officials, including New Jersey Gov. Phil Murphy. Murphy met the president at the airport along with the first lady.

Biden, like many, is arguing with increasing forcefulness that the threats from wildfires, hurricanes, tornadoes, flooding and other extreme weather must be dealt with in ways that will mitigate the ever-worsening impacts of climate change. The president said he thinks the damage everyone is seeing is turning climate-change skeptics into believers.

“We can’t turn it back very much, but we can prevent it from getting worse," he said, adding that scientists have been warning for decades this day would come and merits urgent action. "We don't have any more time."

Biden on Tuesday declared that climate change has become “everybody's crisis” as he toured neighborhoods flooded by the remnants of Hurricane Ida, warning it's time for America to get serious about the “code red” danger or face ever worse loss of life and property.

Biden's plan to spend $1 trillion on infrastructure — including electrical grids, water and sewer systems — to better defend against extreme weather has cleared the Senate and awaits a House vote.

“I’m hoping to be able to see the things we are going to be able to fix permanently with the bill that we have in for infrastructure," he said when asked what he hoped to see on his two-state tour as he left the White House Tuesday.

On the way to the New Jersey briefing, Biden’s motorcade drove through a neighborhood where piles of damaged furniture, mattresses and other household items were stacked outside homes -- a scene disturbingly familiar to ones in parts of Queens, Brooklyn and elsewhere in spots particularly hard-hit by Ida.

Manville, situated along New Jersey's Raritan River, is almost always hard-hit by major storms. It was the scene of catastrophic flooding in 1998 as the remnants of Tropical Storm Floyd swept over New Jersey. It also sustained serious flooding during the aftermath of Hurricane Irene in 2011 and Sandy in 2012.

Many front lawns were covered with waterlogged couches, broken pianos, crumbled plaster and other debris. One home displayed a hand-painted sign that said, “Manville will be back better.”

43 Dead and Counting: What We Know About Ida's Victims in NY, NJ 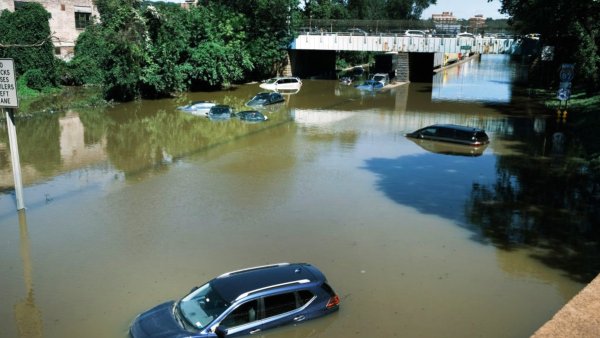 Biden, wearing a mask, spoke to adults and children, including Meagan Dommar, a new mother whose home was destroyed by fire as the flood occurred. She told him that she and her husband, Caesar, had left with the baby before the flooding, then returned to find destruction.

“Thank God you're safe,” Biden replied. She said afterward she hoped the visit would speed help “along a little bit” and said she was grateful for the visit.

Before Biden arrived, Cristel Alvarez said she expected losses at her home to climb as high as $45,000. She has lived in Manville for a decade and the flood was her family's second.

“Let him see everything that we’re going through and hopefully we can get the help that we need because there’s a lot of loss,” she said.

Not everyone was so welcoming. As he walked the route, the Democratic president was taunted by supporters of Republican former President Donald Trump, who yelled that Biden was a “tyrant” and worse. Biden did not look in their direction.

Lou DeFazio, a contractor and three-decade Manville resident, sat on his porch with a small Trump flag waving beside him and said the town needed better planning instead of presidential visits.

“I think their efforts could be better spent in other areas," he said of Biden and other elected officials who were coming. “I don’t know what they’re gonna do for us.”

In total, at least 50 people were killed in six Eastern states as Ida's record rainfall overwhelmed rivers and sewer systems. New Jersey accounted for more than half of that toll (27), while 13 died in New York City, including 11 in Queens alone. A number of people are still missing.

Some of the dead were trapped in fast-filling basement apartments and cars or were swept away as they tried to escape. The storm also spawned tornadoes, three of which were confirmed in the Garden State. Another four were reported in various parts of Pennsylvania as Ida's wrath decimated the East Coast on its way out to sea.

White House Press Secretary Jen Psaki said Tuesday the president was "quite amenable. Sometimes these requests just take a moment to process." On Tuesday, the White House asked Congress for an additional $24 billion in disaster aid to cover the costs of Ida and other destructive weather events.

Earlier in the day, he signed an executive order allowing New Yorkers and small businesses facing mountainous repair costs from Ida's floods to do so without being saddled by city permit-related reconstruction debt.

De Blasio also said the city was working with the Red Cross to get up to $550 cash debit cards in victims' hands to help offset other costs, among additional measures. Last week, he laid out a new severe weather plan that he says will help the five boroughs better prepare to combat such increasingly frequent weather disasters.

Biden's tri-state visit follows a Friday trip to Louisiana, where Hurricane Ida first made landfall, killing at least 13 people in the state and plunging New Orleans into darkness. Power is being slowly restored.

The president used his time in Louisiana to pitch his $1 trillion plan on modernizing roads, bridges, sewers and drainage systems, and other infrastructure to make them better able to withstand the blows from more and more powerful storms.

“Hurricane Ida is another reminder that we need to be prepared for the next hurricane and superstorms that are going to come, and they’re going to come more frequently and more ferociously,” Biden said Friday in a neighborhood in LaPlace.

Past presidents have been defined in part by how they handle such crises, and Biden has seen several weather-induced emergencies in his short presidency, starting with a February ice storm that caused the power grid in Texas to fail. He has also been monitoring wildfires in the West.

The White House has sought to portray Biden as in command of the federal response to these natural disasters, making it known that he is getting regular updates from his team and that he is keeping in touch with governors and other elected officials in the affected areas.

Ida was the fifth-most powerful storm to hit the U.S. when it made landfall in Louisiana on Aug. 29.