In order to prepare for the big event, the NYPD announced several street closures, parking restrictions and other measures done to keep pedestrians safe.

New York City is getting ready to embrace a new year — and bid good riddance to another pandemic-marred 12 months — as it prepares to revive its annual New Year's Eve celebration in Times Square.

The city said it would limit the number of people it lets into Times Square to witness a 6-ton ball, encrusted with nearly 2,700 Waterford crystals, descend above a crowd of about 15,000 in-person spectators — far fewer than the many tens of thousands of revelers who usually descend on the world-famous square to bask in the lights, hoopla and shower of confetti during the nation’s marquee New Year’s Eve event.

“We are very excited to welcome back visitors to Times Square this New Year’s Eve,” said Tom Harris, the president of the Times Square Alliance. “Our goal is to have a safe and responsible event for the world to see.” 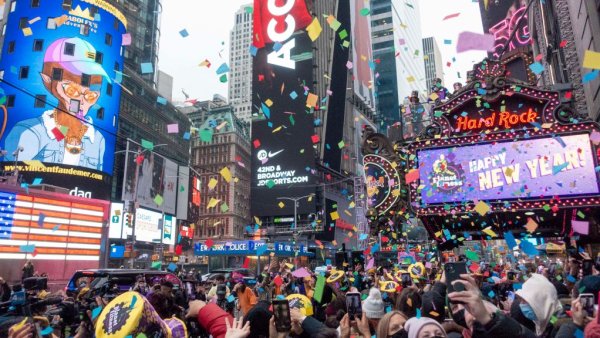 The annual ball drop takes place Friday, as the clock ticks into midnight and ushers in the new year, an occasion usually commemorated with Champagne, clinking pints, joyous embraces and hopes for better times ahead.

Mayor Bill de Blasio, who will relinquish oversight of the nation's most populous city at the stroke of midnight, said the festivities at Times Square would “show the world that New York City is fighting our way through this.”

Last year's ball drop was closed to the public because of the outbreak.

COVID-19 cases in the U.S. have soared to their highest levels on record at over 265,000 per day on average. New York City reported a record number of new, confirmed cases — more than 39,590 — on Tuesday, according to New York state figures.

Officials said those attending the spectacle would have to wear masks and show proof of vaccination. Organizers had initially hoped that more than 50,000 revelers would be able to join in, but plans were dramatically scaled back because of widespread infections.

Rap artist and actor LL Cool J was supposed to be among the performers taking the stage in Times Square Friday night, but announced he would pull out of the event because he had tested positive for COVID.

New York City’s incoming mayor, Eric Adams, is scheduled to take his oath in Times Square soon after the ball drop. He expressed hope Thursday that 2022 would be “a new beginning of our resiliency.”

In order to prepare for the big event, the NYPD announced several street closures, parking restrictions and other measures done to keep pedestrians safe.

Starting at 4 a.m. Friday, Times Square will be closed to vehicle traffic. That includes:

There will also be limits on commercial trucks and vehicles as well. Beginning at 11 a.m., those and other large vehicles will not be allowed to access:

The celebrations will impact certain subway stations as well. Some subway access around Times Square will be closed off early Friday. Entrances at 47th and Broadway will not be open starting at 4 a.m., while the entrance at 42nd Street and 7th Avenue will close at 10 a.m. Both will reopen shortly after the ball drops.

Despite smaller crowds in Times Square and ongoing COVID concerns, restaurants are hoping for a big night of business in the final hours of 2021. NBC New York's Marc Santia reports.

Crosstown access for emergency access vehicles will be on 42nd Street, 48th Street and 59th Street. The NYPD advised that on-street parking in midtown will be extremely limited., and urged people looking to move about the city to use public transportation.

The NYPD said there will be no parking allowed all day Friday at the following areas:

At 3 p.m., those looking to attend the Times Square celebration will be allowed to enter the area directed by police officers to gather in separate sections, with attendees filling in sections moving uptown from West 43rd Street to West 57th Street.

There will be four point of entry to the event, which will serve as screening areas as well:

The NYPD will be out in full force, protecting those who will be in attendance as well as prohibiting items they try to bring inside. Umbrellas, backpacks, lawn chairs, coolers, alcoholic beverages and large bags will not be allowed inside Times Square. The will also not allow anyone who leaves the viewing area before the ball drops to re-enter.

Bomb sniffing dogs and heavy weapons teams could be seen at the Crossroads of the World starting earlier in the week. The department also deployed plenty of metal and concrete barricades in to order to keep revelers separated, as well as protected.

The MTA is also doing its part to limit any passenger mayhem on the rails — an important task given the staff shortages that have led to subway suspensions in the past few days.

The transit agency announced Thursday that will once again ban drinking alcohol on Long Island Rail Road and Metro-north Railroad trains for all of New Year's Eve. The MTA has banned drinking alcohol for years on the day leading up to the celebration, with the prohibition in effect for 24 hours starting at noon Friday.