Exclusive video shows a gang of detainees at Rikers beating a woman as an officer tries to break it up, but doesn't get any backup for two minutes — an incident that illustrates just how challenging it is for jail officers to maintain safety when so wildly understaffed

Rikers Island detainee Viktoriya Nasyrova says she has seen jail staffing levels deteriorate during the pandemic —and that's saying a lot, because long before COVID-19 hit, Nasyrova was already suing the NYC Department of Correction for alleged staffing deficiencies.

Exclusive video obtained by the I-Team shows how a gang of detainees attacked Nasyrova near the showers of the Rose M. Singer Detention Center in January of 2018. A single corrections officer tried unsuccessfully to break up the vicious fight – but the video shows the jail officer had no backup for about two minutes. During that time, Nasyrova was bloodied and partially blinded, according to a notice of claim filed by the prisoner.

"Three years ago I could see absolutely nothing," Nasyrova said.

Last month, New York City settled Nasyrova’s lawsuit for $325,000. The Department of Correction admitted no wrongdoing, but the incident illustrates just how challenging it is for jail officers to maintain safety when they are outnumbered by violent inmates. 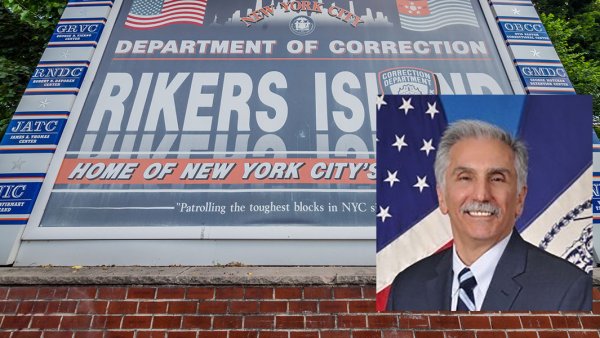 "It’s pretty evident those conditions are unsafe and borderline inhumane," said Paul Prestia, Nasyrova’s civil rights attorney. He said that during the pandemic, a shortage of jail officers has actually served to make detainees more agitated because they are often unable to find escorts in order to make it to outdoor recreation or court appointments.

"The fundamental problem is you have people in jail who are presumed innocent who are not getting a day in court. How can you get justice that way?" Prestia said.

Vincent Schiraldi, the NYC Correction Commissioner, has blamed the staffing crisis on officers calling out sick in unusuallay high numbers.

"The crisis we’ve confronted over the summer was spurred by a staffing crisis that we’re working furiously to address," Schiraldi said in a statement to the I-Team.

"They didn't know what to do with us," says Jermaine Archer, who caught COVID while incarcerated at Rikers Island. The New York City jail holds people pretrial and has faced criticism for deaths and crowded conditions. NBC New York's Kay Angrum was live outside after 2 counter-protesting groups spoke on behalf of corrections workers and the incarcerated.

Uniformed jail officers have nearly unlimited sick leave because the job is so dangerous. But on one day in August, Schiraldi said there were 1789 correction officers absent from work. That was more than 21 percent of the total uniformed staff.

Since then, the DOC has introduced tough new penalties for no-show staff who fail to present proper documentation of their illness.

"Our ongoing efforts to end the staffing crisis are working," Schiraldi said. "Our population is dropping, officers are coming back to posts, and triple shifts are dramatically decreasing to the point where we are starting to see shifts with no triples at all."

But some Rikers detainees and labor leaders say corrections officers remain exhausted and fearful of conditions inside the jail.

Lawmakers are joining in on the chorus calling for Rikers Island to be shut down. Erica Byfield reports.

Patrick Ferraiuolo, President of the Correction Captains’ Association, said new limits on use of force and punitive segregation — also known as solitary confinement — have made jail officers feel as if they have few effective tools to maintain order.

"You can call it what you want, but if you don’t have a place to put a violent inmate and you’re going to put him back in the general population, that’s a recipe for disaster," Ferraiuolo said. "This is my opinion, but you have officers that just are fed up and are afraid to come to work."

The de Blasio Administration says restricting solitary confinement is humane and makes jails safer. A DOC spokesperson added that under the agency's #NewDayDOC plan, aggressive measures have been taken to protect staff, including breaking up the concentration of gang members in housing, offering better medical care to injured officers, and fairer disciplinary outcomes.

If there has been progress on safety and staffing levels, Rikers detainee Anthony Matteo says he’s not seeing it yet. What he is seeing is burned out officers.

Matteo, who has pleaded not guilty to burglary and robbery charges, says the jail staffing shortage has contributed to serious delays in scheduling his trial.

Nasyrova, who has pleaded not guilty to attempted murder, is also awaiting trial.

Last month the I-Team filed a records request seeking a list of corrections officers who have been most often absent from work. Although state courts have ruled work attendance records for city employees are public information, the Department of Correction has not yet provided them.