No issue is bigger than abortion

The future of abortion rights is in the hands of a conservative Supreme Court that is beginning a new term Monday that also includes major cases on gun rights and religion.

The court's credibility with the public also could be on the line, especially if a divided court were to overrule the landmark Roe v. Wade decision from 1973 that established a woman’s right to an abortion nationwide.

The justices are returning to the courtroom after an 18-month absence caused by the coronavirus pandemic, and the possible retirement of 83-year-old liberal Justice Stephen Breyer also looms. 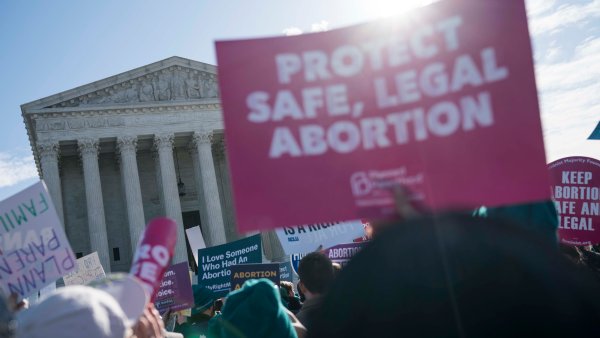 Women's March DC: What to Know About the Pro-Abortion Rights Rally Saturday It's the first full term with the court in its current alignment.

Justice Amy Coney Barrett, the last of former President Donald Trump's three high-court appointees, is part of a six-justice conservative majority. Barrett was nominated and confirmed last year amid the pandemic, little more than a month after the death of Justice Ruth Bader Ginsburg.

Trump and Republicans who controlled the Senate moved quickly to fill the seat shortly before the 2020 presidential election, bringing about a dramatic change in the court's lineup that has set the stage for a potentially law-changing term on several high-profile issues.

With abortion, guns and religion already on the agenda, and a challenge to affirmative action waiting in the wings, the court will answer a key question over the next year, said University of Chicago law professor David Strauss. "Is this the term in which the culture wars return to the Supreme Court in a big way?” Strauss said.

No issue is bigger than abortion.

The justices will hear arguments Dec. 1 in Mississippi's bid to enforce a ban on most abortions after 15 weeks of pregnancy. Lower courts blocked the law because it is inconsistent with high court rulings that allow states to regulate but not prohibit abortion before viability, the point around 24 weeks of pregnancy when a fetus can survive outside the womb.

Georgetown University law professor Lawrence Gostin says he's worried for Texans after the state legislature passed a restrictive abortion law in an overnight session. Under the new law, people who assist in providing an abortion to face financial damages of up to $10,000. "They've allowed enforcement of the law to be delegated to people who may be zealots," Gostin said.

Mississippi is taking what conservative commentator Carrie Severino called a “rip-the-Band-Aid-off” approach to the case by asking the court to abandon its support of abortion rights that was laid out in Roe and the 1992 case of Planned Parenthood v. Casey.

Mississippi is among 12 states with so-called trigger laws that would take effect if Roe is overturned and ban abortion entirely.

By a 5-4 vote in early September, the court already has allowed a ban on most abortions to take effect in Texas, though no court has yet ruled on the substance of the law.

But that vote and the Mississippi case highlight the potential risk to the court's reputation, said David Cole, the American Civil Liberties Union's legal director. The arguments advanced by Mississippi were considered and rejected by the Supreme Court in 1992, Cole said.

“The only difference between then and now is the identity of the justices,” he said.

Jeff Wall, a top Justice Department lawyer under Trump, said the court could sharply expand gun rights and end the use of race in college admissions, but only abortion is likely to move public perception of the court. “I still don’t think that’s going to create some groundswell in the public, unless it’s accompanied by some kind of watershed ruling on abortion," Wall said.

Seat belts, airbags and other safety features were added to cars after many people were dying in crashes. The same approach should be taken to guns to help curb the nation's gun violence, Dr. Jonathan Metzl says.

In early November, the court will take up a challenge to New York restrictions on carrying a gun in public, a case that offers the court the chance to expand gun rights under the Second Amendment. Before Barrett joined the court, the justices turned away similar cases, over the dissents of some conservative members of the court.

Until Barrett came along, some justices who favor gun rights questioned whether Chief Justice John Roberts would provide a fifth, majority-making vote “for a more expansive reading of the Second Amendment,” said George Washington University law professor Robert Cottrol, who said he hoped the court would now broaden gun rights.

More than 40 states already make it easy to be armed in public, but New York and California, two of the nation's most populous states, are among the few with tighter regulations.

“An expansive Second Amendment ruling by the Supreme Court could restrict or prohibit the sensible solutions that have been shown can end gun violence,” said Jonathan Lowy, vice president and chief counsel at the gun violence prevention group Brady. Lowy included state laws requiring a justification to carry a gun as examples of such “sensible solutions.”

A case from Maine gives the court another opportunity to weigh religious rights in the area of education. The state excludes religious schools from a tuition program for families who live in towns that don't have public schools.

Multiple faith leaders - including an Episcopal minister whose LGBTQ identity was central to her faith journey - say religious institutions should be more accepting of LGBTQ people.

Since even before Ginsburg's death, the court has favored religion-based discrimination claims and the expectation among legal experts is that parents in Maine who sued to be able to use taxpayer money at religious schools will prevail, though it's not clear how broadly the court might rule.

Affirmative action is not yet on the court's agenda, but it could still get there this term in a lawsuit over Harvard's use of race in college admissions. Lower courts upheld the school's policy, but this is another case in which the change in the composition of the court could prove decisive. The court upheld race-conscious admission policies as recently as five years ago but that was before Trump's three appointments accentuated the court's conservative tilt.

Among other notable cases, the justices will consider reinstating the death sentence for Boston Marathon bomber Dzhokhar Tsarnaev. The Biden administration is pushing for the capital sentence, even as it has suspended federal executions and President Joe Biden has called for an end to the federal death penalty.

The court will also weigh two cases involving “state secrets,” the idea that the government can block the release of information it claims would harm national security if disclosed. One case involves a Guantanamo Bay detainee who a lower court said was tortured in CIA custody. The other involves a group of Muslim residents of California who allege the FBI targeted them for surveillance because of their religion.

Decisions in most of the big cases won't come before spring because the justices typically spend months drafting and revising majority opinions and dissents.

Around then, Breyer might signal whether he is planning to retire from a job he has held since 1994. Retirement announcements often come in the spring, to give the president and the Senate enough time to choose and confirm a nominee before the court returns from its summer break and begins hearing cases again in October.

The consequences of Ginsburg's decision to remain on the court through Barack Obama's presidency and her death while Trump was in the White House can't be lost on Breyer, said Tom Goldstein, the founder of the Scotusblog website and a frequent advocate before the court.

The courthouse still is closed to the public, but live audio of the court's arguments will be available and reporters who regularly cover the court will be in attendance. The tradition-bound court first provided live audio in May 2020, when the court began hearing arguments by telephone during the pandemic.

Justice Brett Kavanaugh will participate remotely from his home next week during oral arguments after testing positive for COVID-19 despite being vaccinated. The court said Friday that the 54-year-old justice has no symptoms.