Well, premiere day is finally just hours away for legions of fans of "Watchmen," a film based off of the popular 1980's comic book series created by writer Alan Moore and artist Dave Gibbons.

Over the past few days graffiti with the phrase "Who Watches The Watchmen" has been popping up all over the city, with sightings ranging from Chelsea to Soho to Union Square.

Is it the work of a few rabid fans, scribbling the iconic phrase from the books all over town? Or could it be an underground marketing attempt by Warner Brothers, which is releasing the movie. Regardless of who's done the crime, it won't be easy for the city's vandal squad to pin the work on anybody -- studio or rogue fans.

The only evidence is that it all seems to be done by the same one person. The culprit used purple paint, sprayed at an up-and-to-the-right angle, and strategically placed their tags in a few of the major midtown neighborhoods.

If it is indeed a marketing ploy, then the strategy worked. Entertainment blogs Slashfilm and MTV Splashpage have picked up the story, running a few photos taken by Flickr users around the city. 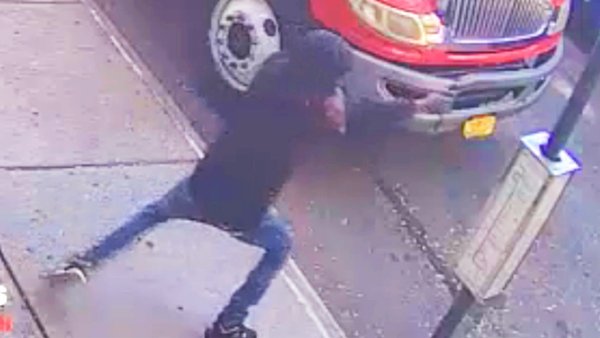 The "Watchmen" film, which premieres Friday, is expected to bring in some serious cash for Warner Brothers and tickets are already starting to sell out in theaters across the city.