NYPD says there have been 33 hate crimes with an Asian victim so far this year; in another recent case, two men exchange punches aboard a Manhattan-bound J train and one is caught on camera trying to choke the other, who appears to be Asian

UPDATE: The man accused of kicking a 65-year-old Asian woman in the stomach has been arrested.

In one of two recent violent attacks in New York City, an elderly Asian American woman was brutally beaten by a man Monday afternoon who repeatedly kicked her in front of witnesses who seemingly stood by.

The 65-year-old woman was walking to church along 43rd street when a man came up to her and kicked her in the stomach, knocking her to the ground, the NYPD said. The man then stomps on the woman's face several times while hurling anti-Asian statements at her. He later casually walks away, the footage shows. 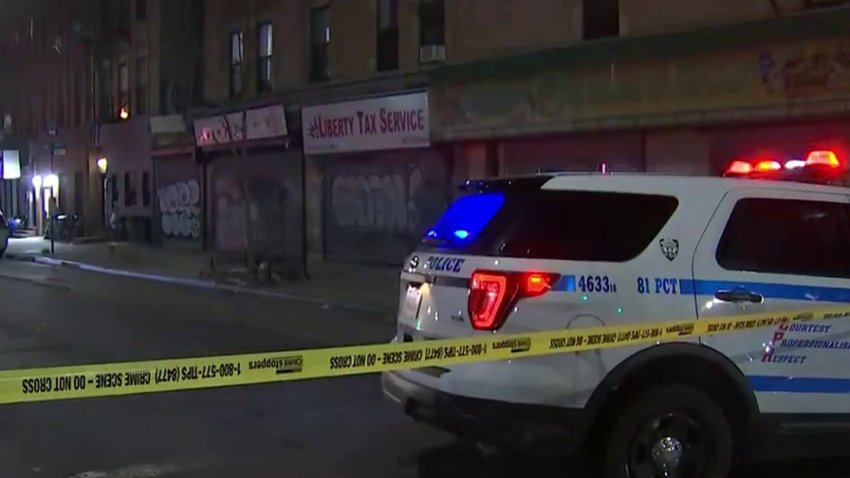 "The assailant said to her 'f you, you don't belong here,'" said Jo-Ann Yoo, of the Asian American Federation at a rally Tuesday near the scene of the attack. "My response is: F--- you, yes I do!"

The woman was hospitalized with serious injuries to her head and leg, police sources said. She was discharged Tuesday evening.

Two security guards in a nearby hotel have been suspended after being seen in a video witnessing the attack, and doing nothing other than closing the building's door just feet away from the incident. Police are searching for the suspect. NBC New York's Pei-Sze Cheng reports.

According to video footage, a man inside a building lobby seemingly stopped what he's doing to watch the assault and later two more men wearing blazers walked into the frame and one of them closed the door as the woman was on the ground.

According to real estate website Street Easy, Brodsky Organization is the property developer and manager of the building where the incident took place.

On Brodsky's Instagram account, the group said they were aware of the incident and the staff who witnessed the account were suspended pending an investigation. The organization also said they were working to identify a third-party delivery vendor who was also present during the assault.

Manhattan Borough President Gail Brewer said that the owner of the Brodsky Organization, Dan Brodsky, has pledged to help. She said he is "very upset and willing to put up any kind of money" to catch the suspect.

The union the doorman is a member of called for calm and patience after many were angry about the seeming lack of response from the staff. The union said that the two men "called for help immediately ... we urge the public to avoid a rush to judgment while the facts are determined."

A man who knows the suspended worker came to his defense, saying We see a lot of women laying on the ground. He didn't see the beating. I know the guy, he's the nicest guy."

The NYPD’s Hate Crime Task Force is investigating the incident and has asked anyone with information to contact the department. Police were seen putting up fliers around the neighborhood in the aftermath of the attack with a photo of the suspect.

New York City Mayor Bill de Blasio called the video of the attack “absolutely disgusting and outrageous” and said it was “absolutely unacceptable” that witnesses did not intervene.

“I don’t care who you are, I don’t care what you do, you’ve got to help your fellow New Yorker,” de Blasio said Tuesday at his daily news briefing. “If you see someone being attacked, do whatever you can. Make noise. Call out what’s happening. Go and try and help. Immediately call for help. Call 911. This is something where we all have to be part of the solution. We can’t just stand back and watch a heinous act happening.”

Mayoral candidate Andrew Yang, the son of Taiwanese immigrants, said the victim “could easily have been my mother.” He too criticized the bystanders, saying their inaction was “exactly the opposite of what we need here in New York City.”

NYPD says there have been 33 hate crimes with an Asian victim so far this year, as of Sunday. The department said there were 11 such attacks by the same time last year.

On Friday, in the same neighborhood as Monday’s attack, a 65-year-old Asian American woman was accosted by a man waving an unknown object and shouting anti-Asian insults. A 48-year-old man was arrested the next day and charged with menacing. He is not suspected in Monday’s attack.

In another recent case, two men exchanged punches aboard a Manhattan-bound J train and one of them was caught on camera trying to choke the other, who appeared to be Asian.

The video ends with the man passing out and the other man walking off the train at the Kosciuszko Street Station. Detectives with the NYPD are now investigating whether the incident is another hate crime directed at Asian Americans in the city.

A crowd gathered in Bensonhurst Monday morning to denounce the recent rise in Asian hate. Two women who spoke at the rally say men spit on them, days apart.

"I believe I was targeted because I'm Asian American, because I'm an easy target," Vanessa Lam said.

Marueen Ki, the other victim, said, "When I saw him I went to the other side because I'm afraid something may happen." Ki said her attack happened outside her senior center on 73rd Street and 18th Avenue.

Lam, who is 16 years old, was just blocks away on 68th Street when she says her attacker pushed her into traffic.

"His aim was to harm me. Had he succeeded, he could have killed me," Lam said.

Lawmakers at the morning rally reaffirmed their commitment to strengthen laws and increase community training.

The NYPD Hate Crime Task Force is investigating a reported assault inside a Midtown subway station Saturday night where a man allegedly assaulted a woman and yelled anti-Asian slurs, according to authorities.

"We too have an obligation to stand up and support our neighbors in need," said state Senator Andrew Goundares, who also spoke on the need for bystander trainings.

"The victim is beaten and choked so brutally that he appears to become unconscious. As I have said, the rise in violence against Asian Americans is disgusting and unconscionable," Meng said Monday.

"The reports of a brutal assault on an Asian American woman in Midtown are absolutely horrifying and repugnant. We are all New Yorkers - no matter how we look or what language we speak - and we must always look out for one another and help those who need it," Cuomo said in a statement Tuesday.

"Violence against our Asian American community is unfortunately becoming an epidemic in our state and across this nation, and it must stop now," the governor added. "These abhorrent acts of hate have absolutely no place in our state, and we all must stand together as one united voice to denounce hate and violence in all its forms, whenever and wherever we see it."

According to a report from Stop AAPI Hate, more than 3,795 incidents were reported to the organization from March 19, 2020, to Feb. 28. The group, which tracks incidents of discrimination, hate and xenophobia against Asian Americans and Pacific Islanders in the U.S., said that number is “only a fraction of the number of hate incidents that actually occur.”