On Tuesday, New York City residents voted for who will replace Mayor Bill de Blasio when his term ends at the end of the year.

While the mayoral race seems to be the most talked-about race of the Empire State, there are many other races taking place.

Scroll down to see the outcomes and additional information about elections in New York. 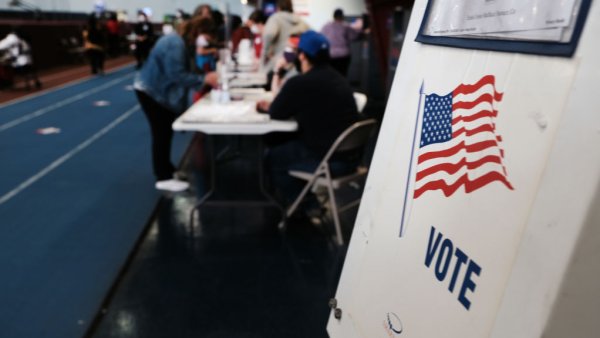 You'll See a Few Questions on Your Ballot This Election Day. Here's What They Mean

MAYOR: The most talked-about race in this election cycle has been the mayoral race. Democratic candidate Eric Adams appeared to claim an earlier victory against Republican Curtis Sliwa, with the latter conceding less than an hour after polls closed Tuesday. The two candidates made their case in two debates, one of which was hosted by WNBC and which you can watch here.

COMPTROLLER: This is a citywide position with various candidates in the running. Democrat Brad Lander was the projected winner over Republican Daby Carreras by the end of Election Night.

MANHATTAN DISTRICT ATTORNEY: Those living in Manhattan selected a new district attorney. The Associated Press projected victory for Democrat Alvin Braggs over Republican Thomas Kenniff. You can read more about this race here.

QUEENS BOROUGH PRESIDENT: Donovan Richards sealed up his reelection, as the AP projected his victory over Republican challenger Thomas Zmich.

STATEN ISLAND BOROUGH PRESIDENT: Former Republican representative Vito Fossella is running against Democrat Mark Murphy. Fosella is attempting to make a comeback after leaving Congress in 2008 when a DUI revealed he had a second family.

Things got heated on Tuesday night in the last debate before the election next Tuesday, as Mayoral candidates faced off against each other one last time. NBC New York's Myles Miller reports.

NY SENATE DISTRICT 30 (HARLEM): In Harlem, voters will vote in a special election who will replace Brian Benjamin, who was recently appointed as lieutenant governor by Gov. Kathy Hochul last month. Democrat Cordell Cleare is running against Republican Oz Sultan and Shana Harmongoff of the Hope 4 NY party.

CITY COUNCIL: 41 out of 51 City Council seats are being contested on Tuesday. To find out more about the candidates running in your district, look at the New York City Board of Elections' sample ballot tool or check out this guide by The City. Some races of note are:

DISTRICT 32/SOUTHEAST QUEENS: Voters will elect who will replace outgoing Council Member Eric Ulrich who is one of only three Republicans in the council.

DISTRICT 43/SOUTHERN BROOKLYN: Democrat Council Member Justin Brannan - who narrowly beat Republican John Quaglione in 2017 – is facing a Republican challenger in a mixed district. Brannan wants to be speaker but has to win reelection first.

DISTRICT 50/STATEN ISLAND (MID-ISLAND): Voters in this district will elect who will replace Republican Steven Matteo. Democrat Sal Albanese (who has served in the council before and ran for mayor) is running against Republican David Carr who is currently Matteo’s chief of staff.

Have you been overwhelmed with anxiety ahead of Election Day? You are not alone. People across the country are saying that the 2020 presidential election has been a significant source of stress in their lives. Experts have dubbed this "election stress disorder." NBCLX's Clark Fouraker shares what you can do to reduce the tension and make it through the week.

Outside of the Big Apple, the greater New York area will also elect county executives and district attorneys.

WESTCHESTER COUNTY EXECUTIVE: The current County Executive George Latimer is running for reelection. He is being challenged by Republican Christine Sculti.

NASSAU COUNTY EXECUTIVE: Democrat Laura Curran is running for reelection against Republican Bruce Blakeman. Blakeman is a Town of Hempstead Council member. You can learn more about this race here.

NASSAU DISTRICT ATTORNEY: This seat has been vacant since the former District Attorney Madeline Singas became a judge. Democrat Todd Kaminksy is up against Republican Anne Donnelly.

NBC New York's Andrew Siff checks in on the top mayoral candidates in the final weekend before Election Day.

Other than these positions, there are several municipal races to watch for as well. To find out more about them, visit your county's Board of Elections website.

The New York City Board of Elections has also created a tool that will show voters sample ballots based on their address.

Along with electing candidates for a variety of city and statewide offices, New Yorkers will have to answer questions on their ballot. These questions will determine some potentially significant changes to state and city law.

In New York City, voters will have to answer "yes" or "no" to five proposals ranging from apportionment and redistricting to same-day voter registration. There are also environmental and court-related questions. You can read more about these proposals here.

In New York City, the last day to request an absentee ballot by mail was Oct.18, but you can still request a ballot in person as long as you do so before Nov. 1. To apply in person you must go to your local county Board of Elections office, which you can find here.

Absentee ballots will be accepted as long as they are postmarked on or before Nov. 2. If you already submitted your absentee ballot and want to track it, go to your Board of Elections website.

Absentee ballots can also be dropped off in person at any of the Board of Elections offices, any early voting location or at any Election Day polling site.

For more information and all you need to know about Election Day in the tri-state area, click here.