Veteran News 4 anchor David Ushery has been elevated into a new station role, co-anchoring the 4 PM and 11 PM editions of “News 4 New York.”  He will join co-anchor Natalie Pasquarella on both shows starting in early October.

Recently elected to the New York State Broadcasters Hall of Fame, Ushery currently anchors the 11 AM and 5 PM editions of “News 4 New York.”  He is a member of the Silver Circle for the National Academy of Television Arts & Sciences, New York Chapter.  He was also honored with a National Emmy and an Edward R. Murrow Award for WNBC’s continuing team coverage of Hurricane Sandy in 2012.

“David is a talented, experienced journalist who takes a thoughtful approach to every story he covers. As an anchor, he’s an incredible newsroom leader who cares about the entire team.  I’m delighted that David is taking on this new role.  He is the only person for this job,” said Amy Morris, vice president of news for NBC 4 New York, in a statement.

For more than 17 years, Ushery has offered WNBC viewers a front row seat to the biggest news stories of the day. He has travelled around the world to report live from site of terror attacks in Paris and Manchester, England, the front lines in Gaza and the West Bank and the opening of the United States Embassy in Jerusalem.  He has also made multiple visits to St. Peter’s Square in Rome where he covered the resignation of Pope Benedict XVI, the 2013 papal conclave electing Pope Francis and the canonizations of Pope Saint John Paul II and Pope Saint John XXIII.

"David is a triple threat—a brilliant writer, a superb news anchor at his best when breaking news forces him to throw the script away, and a superb reporter who can cover anything anywhere.  He has earned deep respect and admiration from every single person with whom he’s worked,” said News 4 anchor Chuck Scarborough, who co-anchored the 11 PM  edition of “News 4 New York” for 42 years and currently co-anchors the 6 PM edition of the newscast.

Throughout the pandemic and recent periods of civil unrest following the murder of George Floyd, Ushery was a daily presence in WNBC’s 30 Rock studios, delivering the latest information to viewers while frequently transitioning to daily press conferences hosted by federal, state and local officials. He also took a closer look at the relationships between law enforcement and communities of color during this time, which included exclusive interviews with top NYPD brass. Following the recent death of Civil Rights icon John Lewis, Ushery secured an exclusive interview with long-time friend and former Congressional colleague Charles Rangel, who described marching alongside Lewis from Selma, AL to Montgomery, AL and offered personal insights on their shared work that spanned more than half a century.

“I have never forgotten that I am a journalist first – and an anchor second. In this current climate, it is more important than ever that we deliver an honest, professional and comprehensive look at the issues and concerns that our viewers share – and secure the answers to their many questions. That’s exactly what we do at WNBC and I am incredibly proud to work shoulder-to-shoulder with the best journalists and news professionals in the business,” Ushery said.

Passionate about service and helping those in need, Ushery has brought attention to the sacrifice and unique challenges facing local first responders.  He has investigated the high rates of suicide among firefighters and placed an important spotlight on the emotional struggles faced throughout their lifetimes.  He won a New York Emmy for his 2019 profile on 9/11 responder Michael Dorian, who was diagnosed with cancer following his service and later fought a challenging battle to secure the health benefits due to him under the law.  Later that year, he conducted one of the last televised interviews with the late NYPD Detective Luis Alvarez, who helped lead the grassroots campaign which resulted in renewal of the federal Victim’s Compensation Fund.

In recent years, Ushery also reported from Houston following the death of former President George H.W. Bush, from Orlando following the deadly Pulse nightclub shooting and from the White House for the transition between the outgoing Obama and incoming Trump teams.  He covered Pope Francis’ 2015 visit to Washington D.C. and New York City live from the parade routes.  Ushery also delivered live coverage following the 2012 Sandy Hook elementary school shooting and the miraculous 2009 landing of US Airways Flight 1549 in the Hudson River. He joined the station in 2003 following a decade at WABC-TV, where he rose from reporter to anchor.

Ushery is the recipient of three honorary degrees, earning honors from St. John’s University (2014), St. Francis College (2018) and Fordham University (2019).  He is actively involved with both the New York Urban League and the Archdiocese of New York, and received numerous awards for community service, including from the Nubian Cultural Center, Consulate of Israel and Public Relations Society of America.  He has received the McDonald’s Black Media Legends: Faces of Black History Award and the National Association of Black Journalists Award for his series of reports on children and violence.  Ushery has also been named “40 under 40” from Network Journal and Black Professionals Business Magazine.

A Hartford-area native, Ushery graduated from the University of Connecticut and began his broadcast career at WFSB-TV, where he worked as the lead evening reporter. He also reported for the Hartford Courant and the Los Angeles Times.  Ushery was 11 years old when he was selected from a search to host the Connecticut edition of “Kidsworld,” a nationally syndicated television show.

One of his first interviews was with news icon Walter Cronkite, who was considered one of the most trusted men in America at the time.  Ushery hosted "Kidsworld" until he was 18. 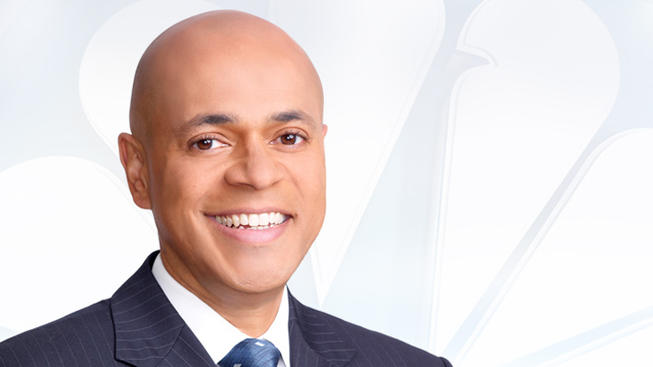