Yaqueline Collado was transported to a local Queens hospital where as a result of about 27 knife wounds, she was pronounced dead

A Queens man has been indicted for allegedly stabbing his 45-year-old wife to death -- brutally knifing her in the chest, neck and torso 27 times -- as the woman's daughter watched in horror, prosecutors announced Thursday.

Carmelo Mendoza, 41, was arraigned Thursday following a Queens County grand jury handing up an indictment charging the defendant with murder for fatally stabbing his wife inside their Jackson Heights apartment in July.

“This is the worst outcome of domestic violence, an argument that turned
violent and deadly. The defendant allegedly stabbed his wife more than two dozen times, as the victim’s 19-year old daughter tried in vain to stop the brutal attack. The defendant will be held accountable for his alleged actions," District Attorney Melinda Katz said in a statement.

Mendoza, of Jackson Heights, was arraigned on an indictment charging him with murder in the second degree and criminal possession of a weapon in the fourth degree. 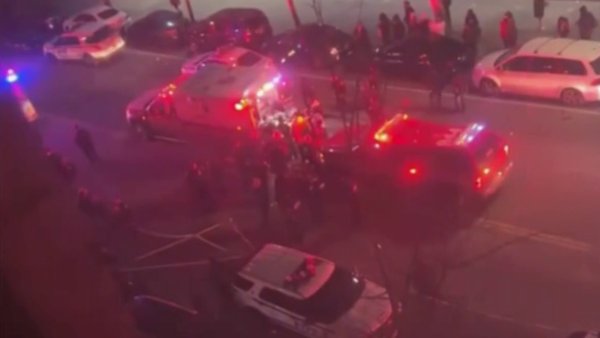 Attorney information was not immediately known. Mendoza is set his return date
for Nov. 17. If convicted, Mendoza faces up to 25 years-to-life in prison.

The indictment is in connection to the death of Yaqueline Collado in July. Prosecutors say Collado was stabbed a total of 14 times. It wasn't clear what prompted the early morning argument on July 3. At some point, Collado told her 19-year-old daughter, who also lives in the apartment, to leave so she wouldn't hear them fighting, according to the criminal complaint.

The fight continued into a hallway and eventually into the kitchen area. Continuing, according to the complaint, after hearing her mother’s screams, the victim’s 19-year-old daughter immediately rushed toward the couple. At that time she allegedly saw Mendoza stab her mother repeatedly in the chest, neck and torso.

The young woman attempted to stop the defendant by throwing items
at him and tried to push him off of her mother, according to prosecutors. However, when Mendoza fell to the floor, he got back up and allegedly continued to stab Collado. The victim allegedly said to her daughter in Spanish, “I’m dying, get out of here.”

According to prosecutors, the daughter, who injured her leg as she tried to intervene, ran out of the apartment and began banging on her neighbors’ doors, screaming for help. The young woman then called her boyfriend and 911.

According to the district attorney's office, when police entered the apartment, they found Mendoza lying on top of Collado and observed that she was lying in a pool of blood with a kitchen knife nearby.

Prosecutors say that Mendoza had allegedly stabbed himself numerous times in the abdomen.

Collado and Mendoza were both immediately transported to a local Queens hospital where as a result of about 27 knife wounds, Collado was pronounced dead, according to the district attorney's office. Meanwhile, Mendoza was treated for self-inflicted injuries and has since been released.