NY Could Go Back on ‘PAUSE' If Hospitals Get Overwhelmed; Cuomo Triggers Emergency Protocols

"We're going to have a problem in the hospitals, I'm telling you that right now," said Gov. Cuomo, who on Monday ordered hospitals to increase bed capacity by 50 percent

"Literally every region is dealing with a hospital issue now," Cuomo said. Hospitalizations surged past 3,500 over the weekend, an alarming volume not seen in New York since May, and are four times higher than the levels seen in June. What the state can't do now, the governor pointed out Monday, is exchange health care resources between upstate and downstate hospitals if all regions are already on alert.

Cuomo's most stark warning came Monday when he warned the state could go back on "PAUSE" if the hospitals become overwhelmed. He added that the number one priority is ensuring the state has enough hospital capacity to treat all patients.

The state has ordered hospitals across the state to identify retired doctors and nurses to return to the frontlines, confirm a 90-day PPE stockpile, and increase bed capacity by 50 percent. Elective surgeries will be halted in regions when necessary, starting with Eric County on Friday.

Hospital factors will become a center point of Cuomo's micro-cluster designations. The governor said new metrics will inform the red, yellow and orange zones based upon hospital availability and demand. He said the state is waiting to review the "post-Thanksgiving effect" before finalizing those metrics, which will be tracked on a new state department of health dashboard.

"We're going to have a problem in the hospitals, I'm telling you that right now. It's going to be a serious situation," Cuomo said. 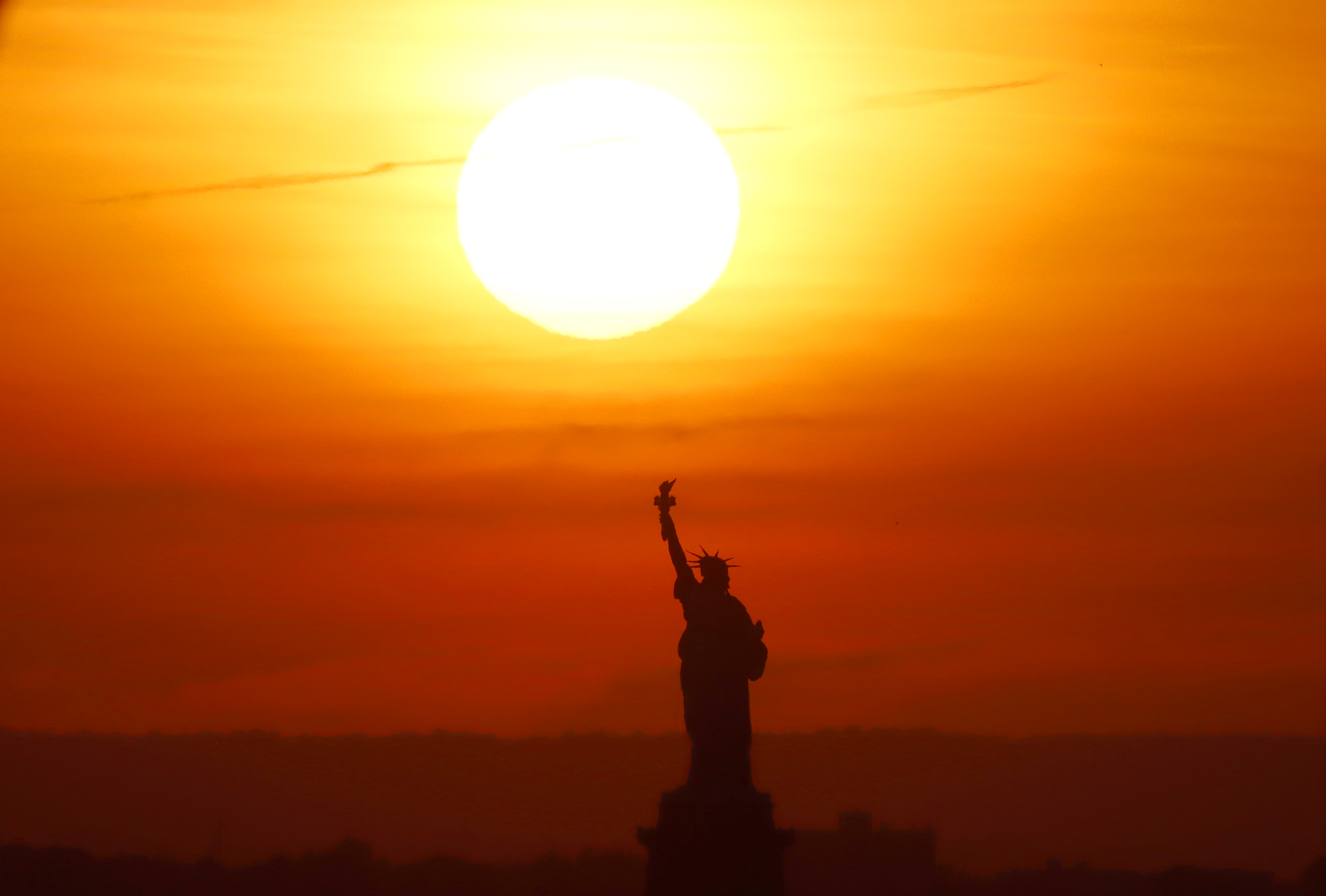 NYC Drought Has Reached ‘Severe' Levels — Here's What That Means, and How Rare It Is

Cuomo also said the state is mandating "load balancing" of patients within hospital systems so that one hospital in a certain area doesn't become overwhelmed while others have more capacity. Cuomo said failing to do so will be considered malpractice by the hospital systems.

There will be other plans either implemented or readied in the coming days as the state prepares for a spike in cases, on top of already growing numbers. The state's surge and flex plans will be prepared, as will plans and staffing for emergency field hospitals.

"When facts change, when the attack changes, change your situation and your defense or offense. COVID is shifting the battlefield dramatically," Cuomo said.

Beyond preparing the state's hospitals for the "war against COVID," the governor's winter strategy also prioritizes increased testing, keeping schools open, minimizing small gatherings and deploying the vaccine, once approved and available. Additional restrictions, like limiting indoor dining in New York City, don't appear to be on the table at the moment.

"The valve no longer controls the spread," Cuomo said, effectively conceding that throttling indoor dining, gyms and other indoor activities doesn't work anymore. "Either people are going to hear it and get it, or they're not ... Government is not capable of enforcing what you do in your home. It’s about people being smart."

Some experts believe that the recent travel for Thanksgiving is going to make a terrible situation even more dire. Dr. Anthony Fauci, the director of the National Institute of Allergy and Infectious Diseases, said that the traveling and people letting their guard down will lead to a surge on top of an already intense surge.

"As we go for the next couple of weeks into December...we might see a surge superimposed upon that surge that we're already in," Fauci said Monday.

Small gatherings are the biggest enemy to controlling the spread of the virus, Cuomo reiterated at his briefing. According to the governor, 65 percent of transmission can be traced back to small gatherings. Limiting those can go a long way in keeping hospitals adequately staffed and keeping schools open — something Cuomo and Fauci agree should be the goal for as long as possible.

After New York City announced it will reopen its school buildings for in-person learning for young students and students with disabilities, the future is still uncertain for other students as the coronavirus pandemic intensifies in the city where parts have been designated a virus hot zone.

New York City school buildings are not only returning to in-person learning on Dec. 7, but they will also transition to classroom instruction five days per week, Mayor Bill de Blasio announced over the weekend. Before the suspension of in-person instruction, students attended school one to three days a week.

City officials plan to reopen public school buildings in a phased approach, starting with 3-K, Pre-K and K-5 students. District 75 students of all grade levels will get the opportunity to return to the classroom a few days later on Dec. 10. When the schools reopen, weekly coronavirus testing will be in effect for students and faculty.

The city is reopening schools "because we have so much proof now of how safe schools can be," de Blasio said Sunday. "We feel confident that we can keep schools safe."

The mayor estimates 190,000 students enrolled in the public schools will be eligible to return the week of Dec. 7. Returning students must have a parent consent form, the mayor said.

The city is reopening schools in phases, in part, to make sure enhanced testing resources will be available for returning students. Middle school and high school students won’t return to in-person learning until after the holiday break, de Blasio said Monday.

“Obviously, from now until the Christmas break, the focus will be on the younger kids,” de Blasio said on CNN. “When we come back, my hope is we can then move quickly to middle school and high school.”

School buildings across New York City have been closed to in-person learning since Nov. 19 due to the city's 3 percent rolling positivity rate. The previously set 3 percent threshold will no longer guide the decision to close schools citywide.

According to the city's data, the current 7-day rolling average now stands at 3.9 percent. New York's positivity rate has climbed as well. By Sunday, the statewide rate reached 4.27 percent, up by an entire percentage point from last Monday's report.

In New Jersey, where the numbers are worse than its neighbor, state officials reported 3,199 cases of COVID-19 and 13 additional deaths Monday; hospitalizations also ticked up to 2,961 — the highest since May 21. The state's transmission rate dropped slightly since last week but it isn't exactly clear how many people were tested over the holiday weekend.

Gov. Phil Murphy said he won't rule out a statewide shutdown, but would only do so as a last resort.

"I'll tell you what would really make a difference here: a big federal stimulus sooner than later with a lifeline to small businesses, restaurants, folks who are unemployed. That would be a game changer," Murphy said on Fox News Sunday morning.

New Jersey will once again sharply reduce the number of people allowed to gather outdoors, and will ban indoor youth and school sports through the rest of the year, as the state combats a steadily rising rate of COVID-19 infections.

All indoor youth and adult sports will be paused as of 6 a.m. Dec. 5 through Jan. 2, Murphy said, with the only exceptions for collegiate and professional teams.

The state's outdoor gathering limit will be cut to 25 as of Dec. 7. The limit in the latter part of the summer and into the fall was 500, then reduced two weeks ago to 150. Some officials have expressed concern that the newly lowered limits may have unintended consequences, however.

"I think it's a little overreaching. I wish he would give towns flexibility to run events in a safe manner," said Holmdel Mayor Greg Buontempo. The town had to cancel its socially distanced tree-lighting ceremony this year as a result of the new restrictions, which he thinks could actually lead to more potential cases.

"I do believe that outside, socially distanced mask-wearing is much safer than people cramming into their homes," Buontempo said.

The state's Department of health is also advising residents against all holiday parties with people from outside their households. Now even visits to Santa Claus should be from a distance, too.

"If malls offer in-person visits, they should be socially distant and reservations. Children shouldn't sit on Santa's lap," Murphy said.