‘For Me, It's Only a Giant': Eli Manning Bids Farewell After 16 Years

"For 16 seasons, Eli Manning defined what it is to be a New York Giant both on and off the field," said John Mara, the Giants' president and CEO

That was the central theme New York Giants quarterback Eli Manning wanted to get across during the press conference he held Friday to formally announce his retirement after 16 years with the Super Bowl-winning team.

The event kicked off with a video highlighting Manning's career and accomplishments — both on and off the field.

John Mara, the Giants' president and chief executive officer, said the day was one of "very mixed emotions."

"It's sad in one sense because we are seeing the end of a very incredible playing career and saying goodbye to someone who is everything you hope a player could be -- both on and off the field," Mara said, calling Manning one of the best players in franchise history and the "ultimate Giant."

Mara, fighting back tears, told Manning "know this: no Giant will ever wear No. 10 again."

Mara then gave the stage to Manning, who listed all that he will miss as he steps away from professional football.

"It's hard to explain the satisfaction -- actually the joy -- I've experienced from being a Giant," Manning said. "From the very first day, I did it my way."

Manning went on to say that he had no regrets and chose to leave the game with "only positive memories" -- although he would have loved to have won more games and championships.

"I'll miss the people and I'll miss the life experiences we shared," he said, adding that "when you win championships you have a special, unbreakable bond with teammates."

Many of those teammates, he said, will be life-long friends.

Manning ended his speech with these resounding words: "Once a Giant always a Giant.

When answering questions from reporters he shed a little light into why he decided to retire -- and it all came down to family.

Manning said that instead of trying to uproot his family and play for another team, "this was the right decision. I know it is. I'm at peace with it. That's what has made this day a little bit easier." 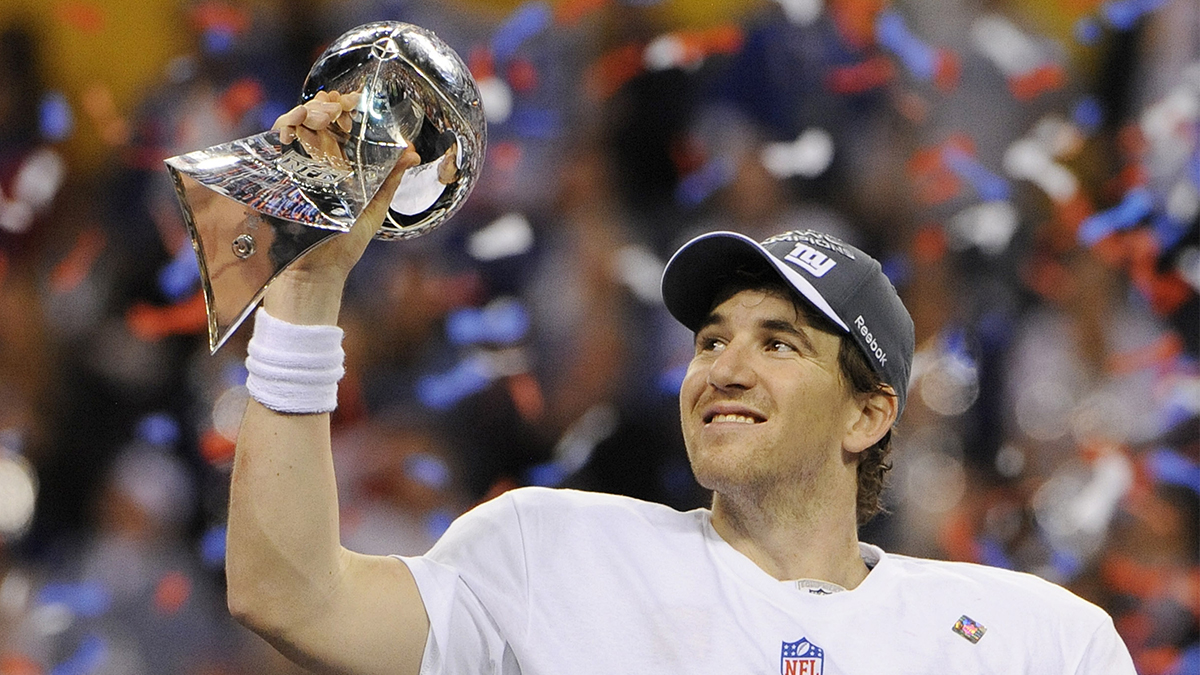 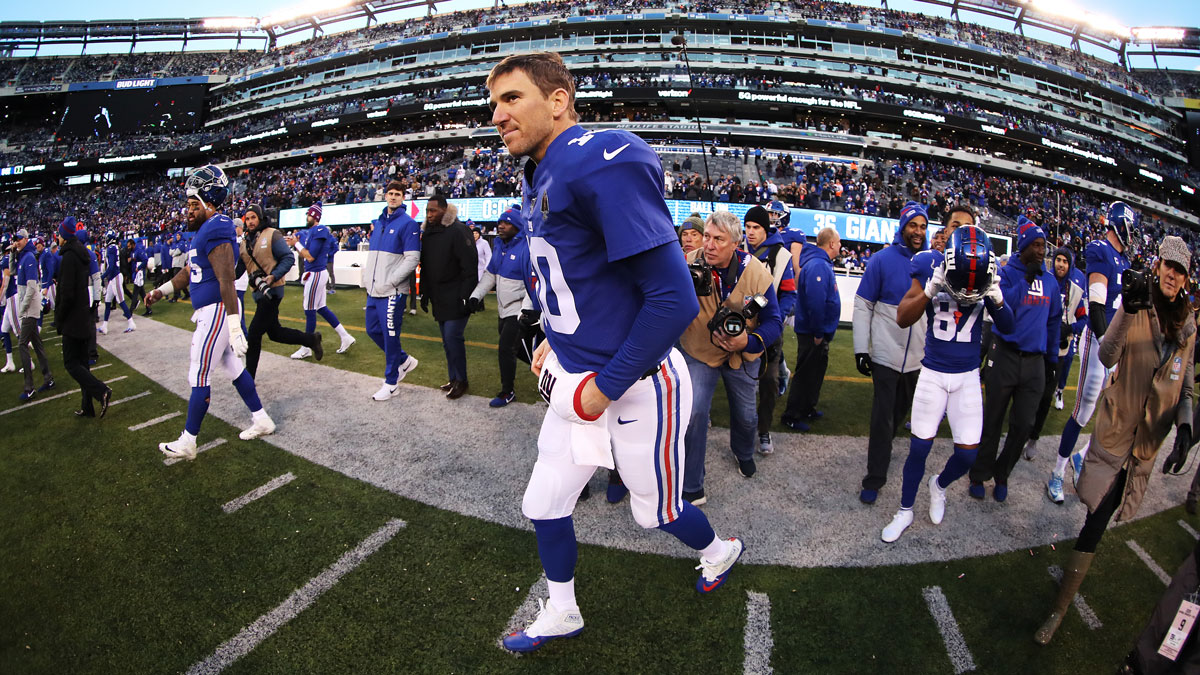 When asked if he would return to the Giants organization in another role, Manning said it is something that he would be interested in, although he will have to think about in what way he can contribute to the organization.

"I'll take some time just to figure out how I want to spend these next years," he said.

"How good was he today?" said Tom Coughlin, who was the head coach of Manning's two Super Bowl teams. "He was composed for the most part and refused to get too sentimental about things we all talk about.''

Coughlin will always remember the Manning he saw on a daily basis.

"You just knew the quality of the man," Coughlin said. "There he is sitting right in front of you every day, the start of every day was always a meeting. You knew you were going to get his best and it was going to be a focused best."

News of Manning's retirement came Wednesday, and while it was a blow for die-hard Giants fan, rumors had swirled for a while that he would retire following his contract's expiration -- even though he never said whether he would play another season or retire.

"For 16 seasons, Eli Manning defined what it is to be a New York Giant both on and off the field," said Mara when the news broke Wednesday.

"We are proud to have called Eli Manning our quarterback for so many years," said Steve Tisch, Giants chairman and executive vice president. "Eli was driven to always do what was best for the team. Eli leaves a timeless legacy ."

Tisch added that Manning " will always be a Giant among Giants."

News of the retirement spread fast and many immediately showed Manning their appreciation and support for his years-long, Super Bowl-winning career.

Even teams from other sports quickly congratulated Manning. In a tweet, the New York Mets congratulated the Giant on an "amazin' career."

Meanwhile, on Thursday, the Commissioner of the NFL, Roger Goodell, tweeted out a statement regarding Manning's decision.

Goodell called the quarterback "a champion" and "true competitor" who "held himself to the highest standards in everything he did." He also said Manning will "leave an indelible imprint on the New York Giants, their fans, and the NFL."

The Giants acquired Manning from San Diego on draft day in 2004 after the Ole Miss quarterback told the Chargers he did not want to play for them and forced the deal that general manager Ernie Accorsi gladly accepted.

It was a game-changing deal for the Giants, and started a major turnaround for a team that was 4-12 the previous season.

Manning replaced Hall of Famer Kurt Warner as the starter for then-new coach Coughlin after nine games. They won the NFC East the following season.

Within three seasons, the Giants won their first NFL championship since the 1990 season and Manning got his first Super Bowl MVP award, knocking off the previously unbeaten New England Patriots. The second came after the 2011 season when Manning and company again beat Tom Brady, Bill Belichick and the Pats.

In both games, Manning hit a clutch late pass on game-winning drives. He and David Tyree hooked up on the helmet catch in the first one and he found Mario Manningham on sideline go pattern in the second, igniting an 88-yard drive.

Manning was named Most Valuable Player in both Super Bowls.

"Congratulations on your retirement, and a great career Eli! Not going to lie though, I wish you hadn’t won any Super Bowls," Brady's tweet read.

Manning was the only player in Giants history to play 16 seasons. His 236 regular-season games (234 starts) and 248 total games are team records.

Manning is sixth in NFL history with 8,119 attempts and seventh with 4,895 completions, 57,023 yards and 366 touchdown passes. He also has the franchise's highest career completion rate (60.29 percent). He was selected to four Pro Bowls.

Throughout his career, Manning has been known for his calm and collected demeanor during the most intense of games.

Manning started more than 200 straight games for the Giants between 2004 and 2017 before being benched for one game in favor of Geno Smith. He then resumed starting through the remainder of that year and the 2018 season.

The two-time Super Bowl MVP was reduced to a backup role when Daniel Jones, the No. 6 pick overall in the 2019 draft, was made the starter in Week 3 this season. He did have a final hurrah, starting and winning a game over the Dolphins after Jones was hurt in December.

"That was my farewell and a moment I will cherish forever," said Manning.

"More than anything you learned how he did it," Jones said. "You watched how he interacted with people, how he works himself. There is no better way to learn from than to see it in action and done every day at a consistently highest level in terms of leadership and being a good teammate."

Off the field, Manning and his family built "The Eli Manning Children's Clinics" at the Blair E. Batson Hospital for Children in Jackson, Mississippi, according to Giants.com. He also supports numerous charities.

Manning will be awarded the Bart Starr Award on Saturday, Feb. 1, 2020, the day before Super Bowl LIV.

The award is given to an NFL player who best exemplifies outstanding character and leadership in the home, on the field and in the community.

Eli's brother Peyton won the Bart Starr Award in 2015, making this the first set of brothers to win the award since its inception in 1989. He also received the prestigious Walter Payton Man of the Year Award in 2016.

The longtime Giants quarterback hold most of the the franchise's passing records, and was named MVP of two Super Bowls after leading his team to wins over the Patriots. NBC New York’s Bruce Beck reports.
Copyright NBC New York/Associated Press