What happens when some city workers, like those in the Department of Sanitation, refuse to get the shot? Several neighborhoods in Brooklyn and Staten Island are seeing that potential issue play out in an ugly — and smelly — way on their sidewalks

Time is running out for New York City workers to get the COVID-19 vaccine, with the deadline of 5 p.m. Friday.

Much has been made about what would happen if large numbers of unvaccinated police officers or firefighters are benched, with critics saying that the policy puts lives at risk by greatly reducing the number of first responders available.

But what happens when other workers in other city departments, like the Department of Sanitation, refuse to get the shot?

Several neighborhoods in Brooklyn and Staten Island are seeing that potential issue play out in an ugly — and smelly — way on their sidewalks.

Some 5% of Unvaccinated Adults Quit Their Jobs Over Covid Vaccine Mandates, Survey Shows 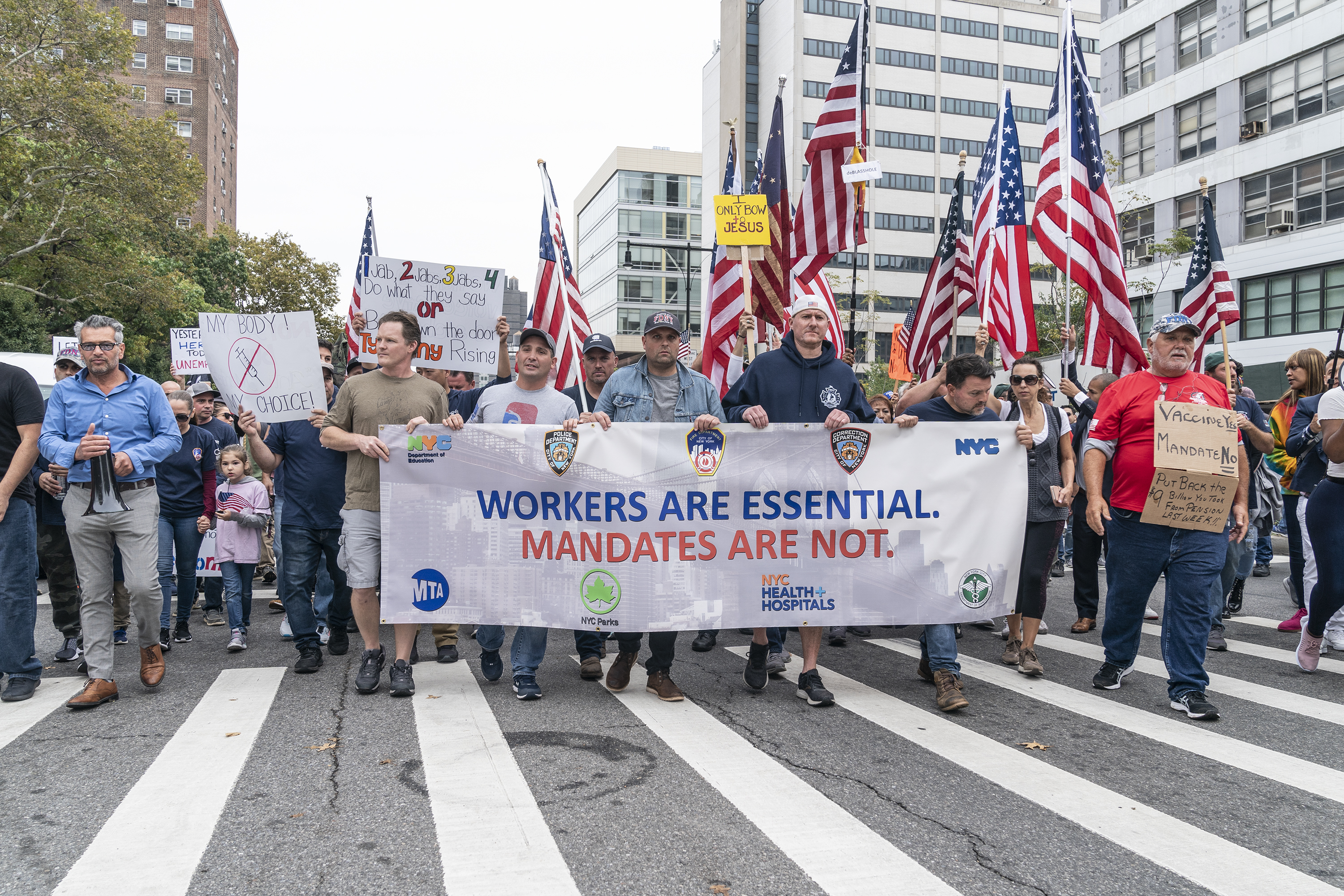 Trash bags can be spotted all over the Midwood neighborhood of Brooklyn, where some residents said that it has been days since their trash was last picked up. A few said they realized something was off earlier in the week, as one missed pickup happens, but they started to think there was a problem after the second missed time.

On both residential streets and commercial areas, the trash bags on the sidewalk are piled several feet high in some instances. One resident who has lived in the area for about 40 years said she has never seen the area as dirty as has been the past few days.

"Thank you, Mr. Mayor," she said, unhappy with Bill de Blasio's decision to make the COVID vaccine mandatory for city employees, which has led to the current situation. That same problem is occurring all over Staten Island as well.

City leaders admit the skipped pickups may be on purpose, with some Sanitation Department workers upset about the mandate.

"There are some places where we're seeing that the totals just don't add up in terms of the trash being picked up," de Blasio said. We're going to the union today to say this has to be addressed. This is something we are not going to let continue."

Sanitation workers could be seen tossing trash in a truck in Midwood on Wednesday. Many residents are sympathetic to the workers' resistance — yet also annoyed they are stuck with stacks of trash.

"You can’t force people to put things into their body. I don’t agree with that," said Paul Martin.

"Keeping the city clean keeps it healthy. So I would expect them to be the first to sign up not do something like this," said Zeb Stampfer.

Some are so frustrated with the mess, they have taken to Twitter to confront the mayor and Sanitation Department, saying thing like “exactly how high you willing to let the trash pile up?” and “Saturday’s trash still hasn’t been picked up on Staten Island."

A sanitation spokesperson told NBC New York that they are :aware that there are collections delays. Residents may leave their material out."

New York City could see an NYPD officer shortage amid a vaccine mandate - and firefighters are protesting the move. Andrew Siff reports.

De Blasio would like to see the situation cleaned up (literally and figuratively) very soon.

"“New Yorkers need to know that their city is going to be clean, and they have a right to that," the mayor said.

The city is urging impacted people to report what’s happening to 311 so they can track the issue. The mayor says about two-thirds of Sanitation Department workers are vaccinated.

The union that represents sanitation workers did not immediately respond to a request for comment.