Officer Jason Rivera died last Friday after being shot while responding to a domestic disturbance call in Harlem; Officer Wilbert Mora was also shot and killed and will have his services next week

Huge crowds of friends, fellow officers, family members and other mourners waited in frigid temperatures to say their final goodbyes to a 22-year-old NYPD officer who was shot and killed less than a week ago in Harlem.

The mournful sounds of Amazing Grace pierced the crisp morning air as Officer Jason Rivera’s casket, draped in a green, white and blue NYPD flag, was transported to St. Patrick’s Cathedral for his wake Thursday afternoon, at the same site where his funeral will be held Friday at 9 a.m.

Thursday's public viewing for the officer lasted into the evening, during which time scores of grieving loved ones and New Yorkers mourned the life cut short, while Rivera was simply doing his duty at a job he loved.

Police from his precinct in Harlem as well as officers from across the country and as far away as Jordan came in uniform to say their brother in blue will never be forgotten. Mayor Eric Adams paid his respects in the afternoon.

There was an incredible show of support from non-police New Yorkers as well, who waited in the frigid temperatures to say goodbye. Some, like Frank Pena, knew Rivera: He owns the Inwood Pharmacy where Rivera used to work during his college years.

Pena said Rivera was proud of his Dominican roots, and that he loved the city and wanted to serve it.

There were many others who never knew the fallen officer, but said they wanted to be there because they "felt connected to him."

"My thanks to this officer that I never knew. He's a friend for all of us, a family member for all of us, a buddy. We never knew him but I feel that connection," said Rafael Ocasio, who carried with him a single rose and a heavy heart. "To say thank you. Simply, say thank you. And I feel all these people here will do the same. Today, tomorrow, and for the other, Officer Mora. That's all I can do." 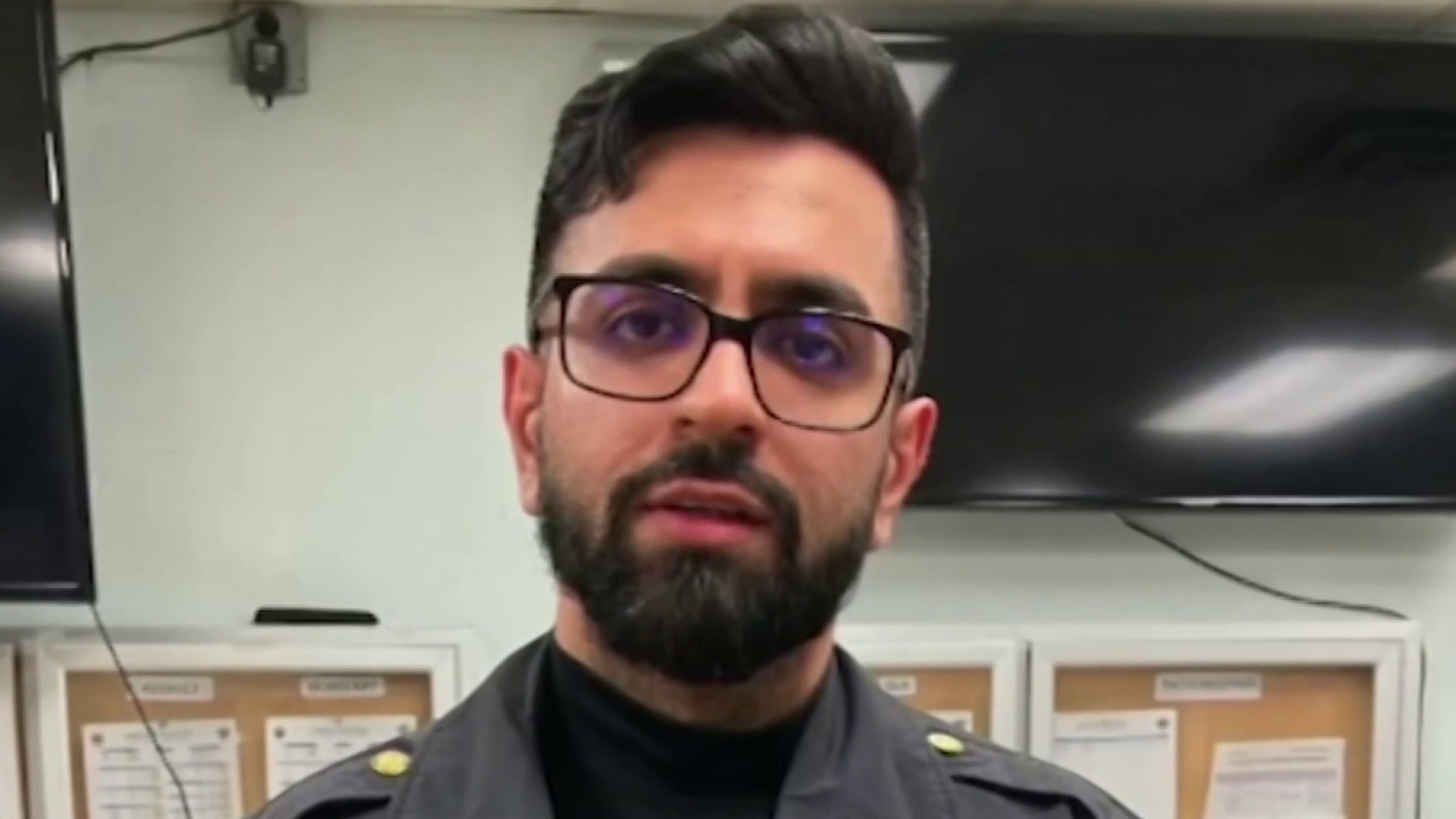 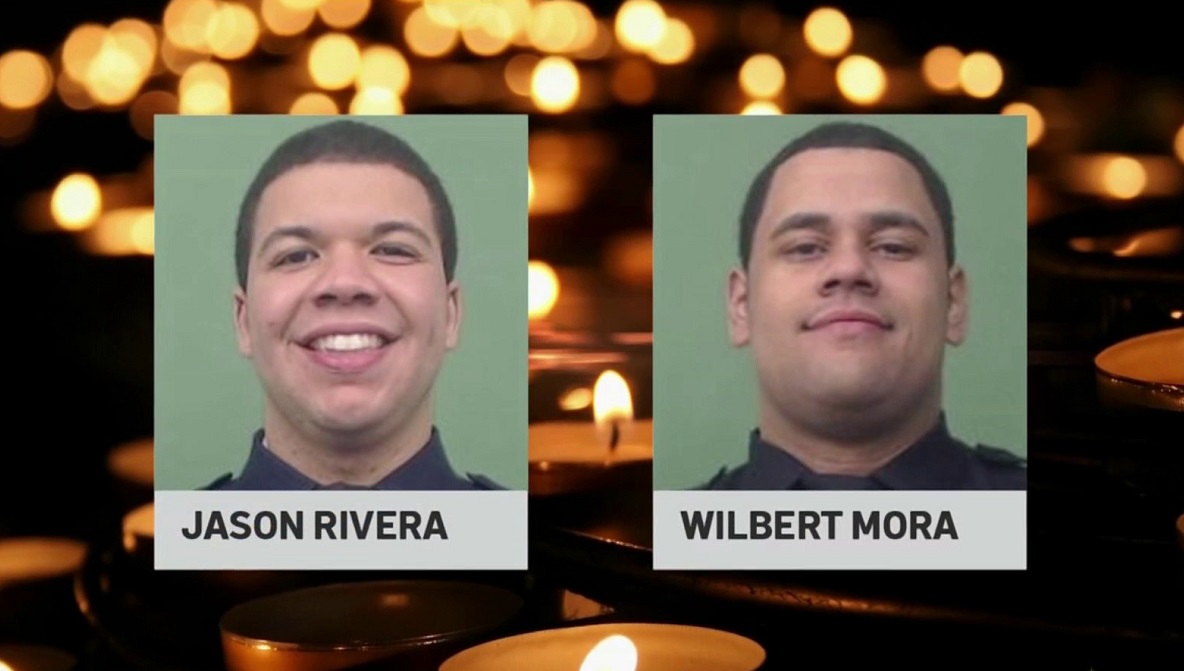 NYPD in Mourning: What We Know About Fallen Officers Jason Rivera & Wilbert Mora

Rivera called Inwood home, and so many people from his neighborhood will always remember the kid who always wanted to be a cop.

Torres fondly remembers working side-by-side with Rivera at Inwood Pharmacy when they were teenagers. A few years ago, coworkers surprised Rivera with a cake as he worked the register on his birthday. Video showed the young man smiling and happy as everyone celebrated for him.

For the third night, the community gathered to hold a vigil for the two officers shot in Harlem after responding to a domestic disturbance call. NBC New York's Jessica Cunnington reports.

Torres said Rivera’s dream was always to be a cop, and even before he joined the NYPD, he was dedicated to a life of service.

"He used to go outside. The homeless people were hungry. He would go to the store and buy food for them," Torres said.

When Rivera got the job and put on the uniform, he stopped by the pharmacy all the time.

"I was happy for him. He told me look see, dreams come true," Torres said.

Two NYPD officers, Jason Rivera and Wilbert Mora, have died after they were shot in Harlem Friday while responding to a domestic violence call. NBC New York's Jessica Cunnington reports.

After a days-long struggle, Rivera's partner Officer Wilbert Mora died from injuries suffered in the shooting as well. The 27-year-old was taken off life support at a Manhattan hospital four days after being shot by a gunman shot him during a domestic disturbance call. Before dying, Mora's heart, liver, pancreas and both kidneys were donated to others.

The viewing service for Mora will be held on Feb. 1 from 1 p.m. until 8 p.m. at St. Patrick's Cathedral as well, with the funeral to be held the following day at 10 a.m.

Mora and Rivera “were dedicated, courageous and compassionate officers, loved by many. The pain their families feel is immeasurable. We pray for them; we will be strong for them,” NYPD Commissioner Keechant Sewell said in a message after Mora's death.

Gov. Kathy Hochul announced that flags on state buildings will be flown at half-staff Friday in honor of Rivera and Mora.

Accused gunman Lashawn McNeil, who was shot by a third officer, died Monday.

NYPD Officer Jason Rivera had always wanted to become a cop. One of his former coworkers remembered the 22-year-old who made his dream come true before his life was cut short by a gunman. NBC New York's Marc Santia reports.

The officers' deaths echoed the 2014 killings of another pair of officers, Wenjian Liu, 32, and Rafael Ramos, 40, who were fatally shot by a man who ambushed them as they sat in their patrol car. That was the last time multiple NYPD officers were killed in the same incident; only five such incidents have occurred in the last 20 years, excluding the terror attacks on 9/11.

Auxiliary police officers Yevgeniy Borisovitch and Nicholas Pekearo were gunned down in Greenwich Village on March 14, 2007. The two were chasing a suspect who had just shot and killed a worker inside a pizza restaurant.

In 2004, detectives Patrick Rafferty and Robert Parker were shot and killed after arriving at the scene of a domestic violence suspect attempting to steal a car on Sept. 10. On March 10, 2003, detectives Rodney Andrews and James Nemorin were shot and killed in their car after both were discovered to be police during an undercover drug operation on Staten Island.

Rivera, Mora and another uniformed officer responded to a domestic disturbance call around 6:15 p.m. on Jan. 21 on West 135th Street by a mother who said she was fighting with her son, according to police. She did not mention any injuries, or any weapons, on the call.

After officers arrived, they went to a rear bedroom, where McNeil fired multiple times as they approached the door. The man then tried to run from the apartment, but was confronted by the third officer, rookie cop Sumit Sulan, who shot him twice.

In addition to the gun he was firing, sources say another weapon was found under his bed, a privately assembled weapon based on parts purchased and registered in Michigan. The ATF/NYPD Joint Firearms Taskforce was still trying to figure out how the AR-15-type assault weapon got into McNeil's possession, a senior law enforcement official said.

According to multiple senior officials with direct knowledge of the investigation, the accused shooter, McNeil, has a history of increasingly rabid belief in anti-government conspiracy theories. Officials are also looking into the possibility that McNeil continued firing after the officers were down, and before he charged down a hallway and was shot himself.