As smoke poured through the halls a New York City high-rise on Sunday, killing 17 people in the Bronx, tenants were faced with a life-or-death decision: Should they stay put or try to escape?

Several survivors later told reporters that when they saw their hallways fill with smoke, they returned to their apartments to await rescue rather than make a run for it. That was the right response, according to the National Fire Protection Association, a nonprofit that writes codes and standards and educates the public about fire safety.

Just what you should do in a fire, though, depends partly on the design of the building and where the fire is located. 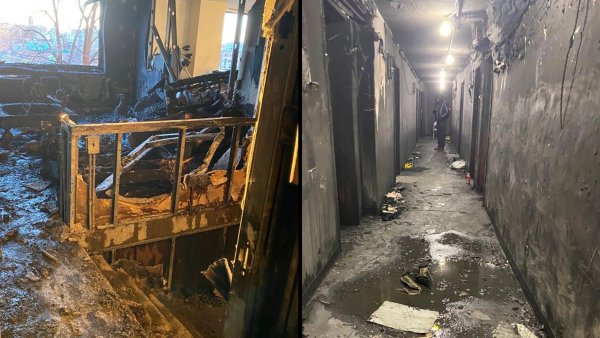 Generally, the NFPA says people should evacuate a burning building if it is safe to do so. First, they should feel doors before opening them, leaving them closed and looking for another way out if they are hot to the touch. Residents should shut all doors behind them to prevent the spread of smoke and fire. They should be sure to take their keys with them in case they have to return to their apartments.

In most high-rise buildings, the nearest stairwell is the emergency exit, but if it is filled with fire or smoke, people should look for another exit. If no exit is safe, they should return to their apartments and shelter in place. In the Bronx fire, survivors told reporters that both the hallways and stairwells were thick with smoke.

Every apartment in New York City is required to have a notice posted on the door saying whether the building is considered combustible or non-combustible, based on the way it was constructed.

Those notices instruct people living in fireproof, high-rise buildings not to evacuate, but instead shelter in place unless the fire is in their own apartment.

The Bronx apartment building that burned is considered non-combustible, which means it has concrete poured ceilings and floors. In fact, the fire, apparently caused by a malfunctioning space heater, did not actually spread past the unit where it started and an adjacent hallway.

But the door to the apartment where the fire started failed to close behind the fleeing tenants, letting smoke quickly spread throughout the building, including the evacuation stairwells.

Residents who shelter in place should use wet towels, wet sheets or tape to seal doors and vents and prevent smoke from entering. They should call 911 to alert firefighters that they are trapped and give their exact location. They should also signal at a window by waving a flashlight or light-colored cloth, according to the NFPA.

Trapped residents can open windows for fresh air or to signal to firefighters, but they should not break their windows. That can allow smoke to pour in from outside, leaving them with no way to keep it out.

Most fire deaths are not caused by burns, but by smoke inhalation, according to the NFPA.

Homes today tend to contain a lot of products made with synthetic fibers that burn at very high temperatures, helping fires spread rapidly, association spokesperson Susan McKelvey said. They also generate toxic gases that can overcome people within moments. In a typical home fire, residents may have only a couple of minutes to escape safely by the time a smoke alarm sounds, she said.

“Fires spread so much faster now,” McKelvey said. “And it's not necessarily the flames that can hurt someone. It's the smoke and toxic gases that make it really hard to see and breathe.”

The first glimpses inside the charred Bronx apartment building where 17 people died in a fire Sunday showed the burnt remnants and blackened hallways that were filled with smoke as people desperately tried to escape. NBC New York's Rana Novini reports.

As a fire grows inside a building, it will often consume available oxygen. The smoke also contains carbon monoxide, which works inside the body to deprive victims of the oxygen they need. And the toxic chemicals in smoke can cause organ damage.

New York City Fire Department Chief of EMS Lillian Bonsignore compared the possible long-term impacts of intense smoke exposure to that of having a stroke.

“The cells in your body and the organs in your body are fairly sensitive,” she said. “So when you put them under this kind of stress, or this kind of toxicity or lack of oxygen, those cells may not be able to come back. So you’re left with this residual type of damage.”

The basic principals are the same whether you live in a high rise, a detached single-family home, or a row home, like the one in Philadelphia that burned last week, killing 12 people, McKelvey said.

Homes need good, working smoke detectors that are checked often. In addition, residents need to have an escape plan and practice that plan. It's especially important to know who will be responsible for making sure children or people with mobility problems are safe. In an apartment building, residents need to ask the building manager about the emergency protocols, McKelvey said.

In the Bronx fire, some survivors told reporters that they ignored the smoke alarm at first because they were used to false alarms. Even when that is not the case, people in high-rise buildings and hotels often hesitate to evacuate, McKelvey said.

“People don’t respond until they see real signs of danger, but by that time it is most likely too late to escape,” she said. “You have to always take a smoke alarm seriously."