Tessa Majors, 18, was found with stab wounds to her face and body as detectives say she fought her attackers as much as she could

Police are searching for a third teen who was expected to come in for questioning in connection to the killing of a Barnard College freshman — but then took off, three law enforcement sources tell NBC New York.

The NYPD is searching the area near 125th Street and Park Avenue in Harlem who they believed was going to come in for questioning with a lawyer on Monday. However, that teen was last seen running from a car in the afternoon and has not been seen since.

Detectives are looking in stores on 125th Street and police helicopters are aiding in the search for the teen who is believed to be connected the stabbing death of 18-year-old Tessa Majors in Morningside Park.

Earlier Monday, the family of Majors, who was brutally stabbed to death, allegedly by a group of teenage attackers during a robbery, issued a searing rebuke Monday of the police union president's radio comment over the weekend that she was in the park to buy pot.

"The remarks by Sergeants Benevolent Association president Ed Mullins we find deeply inappropriate, as they intentionally or unintentionally direct blame onto Tess, a young woman, for her own murder," the Majors family said Monday. "We would ask Mr. Mullins not to engage in such irresponsible public speculation, just as the NYPD asked our family not to comment as it conducts the investigation."

A 13-year-old has been arrested and police are questioning a 14-year-old in connection to the Barnard College freshman's death in Morningside Park, and police are still looking for others involved. NBC New York’s Ray Villeda reports.

The statement comes after Mullins suggested on John Catsimatidis' Sunday radio show that Majors may have been in Morningside Park the night she was stabbed to death to buy marijuana.

"An 18-year-old college student at one of the most prestigious universities is murdered in a park, and what I'm understanding, she was in the park to buy marijuana," Mullins said, then went on to talk about what he described as lack of pot law enforcement in the city, the Daily News reported.

As police questioned and released two teenagers in connection to the stabbing death of Tess Majors, the community gathered to remember her and wonder how this could have happened. NBC New York’s Ray Villeda reports.

Majors was in the park just before 7 p.m. Wednesday when, according to the NYPD, she was a victim of a "robbery gone wrong." The NYPD has not mentioned anything about a possible marijuana connection, saying its investigation remains active and ongoing. Meanwhile, on Monday, the medical examiner's office ruled Majors' death a homicide, staying she died from multiple stab wounds to her torso.

A 13-year-old boy has been charged with second-degree murder and other crimes as a juvenile in the young woman's death -- and last week, a 14-year-old was being questioned by the NYPD based on the younger boy's statements, a senior law enforcement official previously told News 4. The teen that had been charged said he watch his friend slash Majors with a knife, according to a detective's testimony.

The first-year student was walking through Morningside Park when she was stabbed in an apparent robbery. She stumbled up some stairs where she was found by a security guard, and later died. NBC New York's Ida Siegal reports.

Police are still trying to identify all of the attackers allegedly involved. A law enforcement source said a witness saw a group of people running from where the attack happened.

In their statement Monday, Majors' family said they want to know "what exactly happened to Tess and who committed her murder. We believe, for the immediate safety of the community and the surrounding schools, that should be everyone’s top priority and we are grateful to the men and women of the NYPD for all of their efforts."

Police immediately stepped up security in the park area after Majors died. Crime statistics show more robberies were reported in Morningside Park this year than in any other park in the city.

In a Friday night hearing for the 13-year-old charged in Majors' murder, police described how the group of teenagers put Majors in a chokehold and removed items from her pockets. The college freshman was able to fight back, biting one of her attackers on the finger, police said.

Detectives say the charged teen watched as Majors was stabbed at the base of the steps, feathers coming out of her jacket as she struggled to fight back. She was stabbed multiple times and managed to stagger out of the park to find a security guard for help. Majors died at a hospital.

Police said in court that 18-year-old Tessa Majors fought back against the group that robbed and killed her, as she bit one of the suspects on the finger. NBC New York’s Myles Miller reports.

Majors moved to New York from Virginia and was a first-year student at the school. Now her parents are preparing to bury the young woman, whom they and others have described as a generous soul with a brilliant future.

Majors' death has rocked the entire campus community -- and the New York City community at large. Her family thanked the "thousands of strangers who have taken the time to console us, share in our grief and let us know we are not alone during this terrible time," according to their Monday statement. "Tess would not have been surprised by this beautiful reminder of our shared humanity."

More on the killing of Tessa Majors 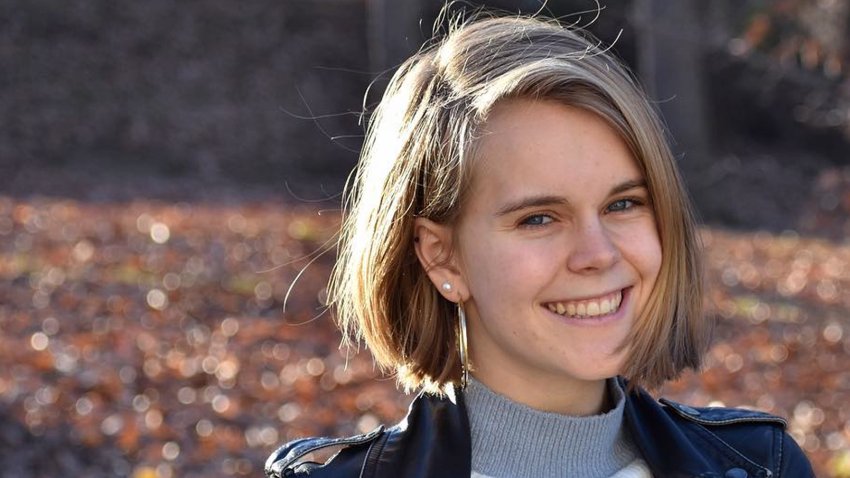