An 18-year-old tourist from Michigan visiting Times Square with her family died in the 2017 rampage, while nearly two dozen people were hurt

The man behind the wheel of the car that barreled through crowds of pedestrians in Times Square five years ago, killing a woman and injuring 22 other people, was cleared of responsibility Wednesday because of mental illness.

The Manhattan jury accepted an insanity defense claiming Richard Rojas was so psychologically disturbed he didn’t know what he was doing.

The judge has said the finding would qualify Rojas for an open-ended “involuntary mental commitment” instead of a lengthy prison term. He will head to a state mental health care facility instead of prison.

"He needs to be helped and he will get the help that he needs," said defense attorney Glenn Abolafia.

Rojas, 31, was accused in an attack that injured more than 20 people and killed Alyssa Elsman, 18, of Michigan, who was visiting the tourist destination with her family.

The jury was instructed that if it found prosecutors had proven their case, it also had to decide whether or not he “lacked responsibility by reason of mental disease or defect.”

Rojas was fighting murder, assault and other charges at a trial unfolding in the shadow of mass shootings across the country and the political debate in which gun-control opponents have sought to blame the violence on failures in mental health care.

“We are grateful to the jury for its service," Bragg said. "Our condolences continue to be with the family, friends and loved ones of Alyssa Elsman, who suffered a terrible and tragic loss, and all of the victims of this horrific incident. I thank the prosecutors, detectives, analysts and staff members for their hard work and dedication on this long case.” 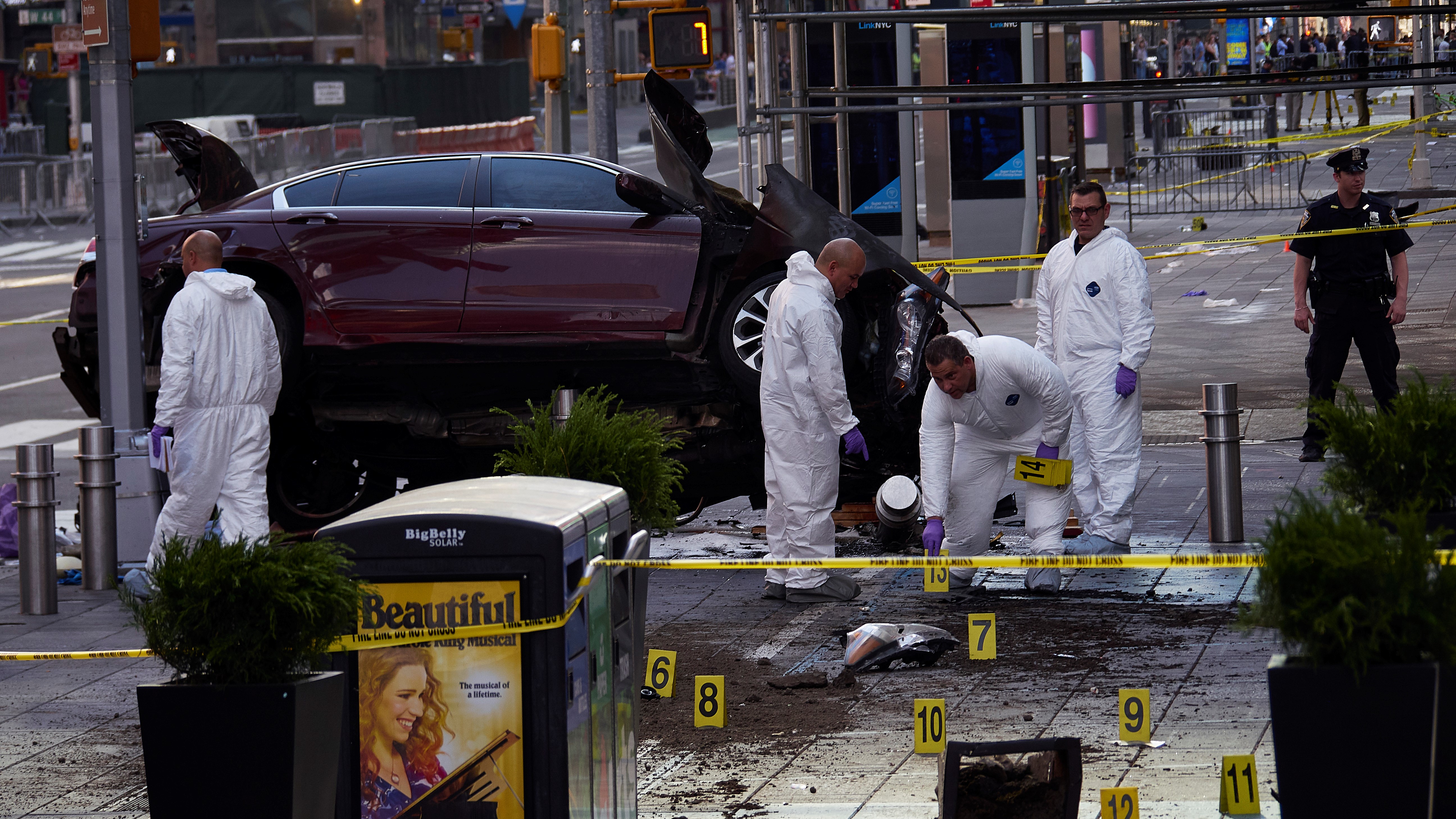 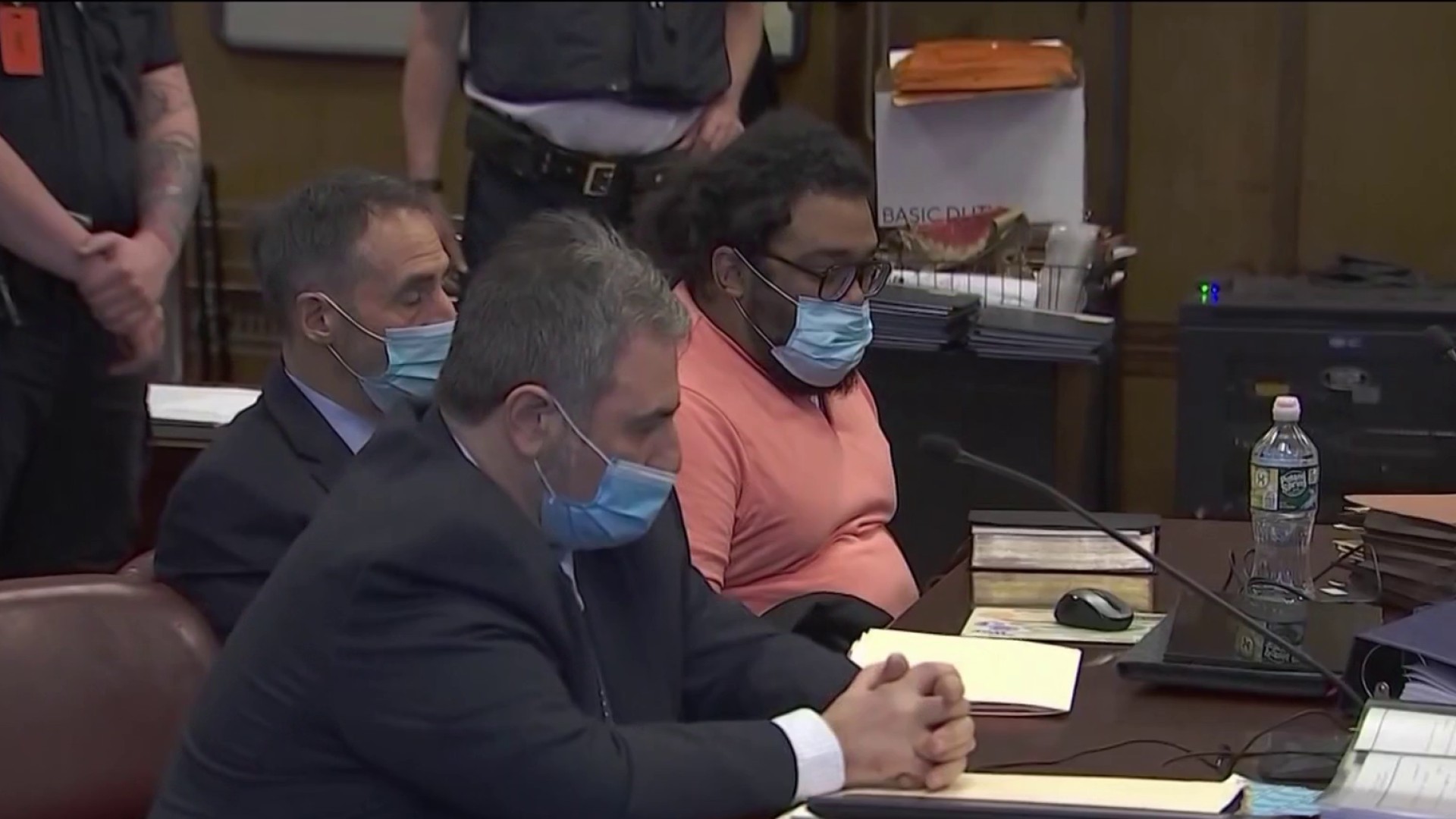 During the trial, prosecutor Alfred Peterson told a Manhattan jury that Richard Rojas was well aware of the carnage he was causing by plowing through helpless tourists in 2017 visiting the popular destination known as “the crossroads of the world.”

It was “impossible for him not to know exactly what was happening,” Peterson said. “But he didn’t stop.”

After Rojas finally crashed his car, his first words to a traffic agent were, “I wanted to kill them all,” the prosecutor added.

Meanwhile, defense attorney Enrico DeMarco said during the trial that Rojas had a history of mental illness that made him unable to understand the consequences of his actions that day.

“This a case about a 26-year-old who lost his mind,” DeMarco said. "His records are replete with expressions of remorse with what he did...He realizes now what he did but at the time that this happened he was in such a psychotic state he was a different person."

Prosecutors conceded Rojas had some mental challenges and that a motive for the attack is not clear cut. But they also argue that the defendant had led a mostly normal life — serving in the military, getting a real estate license, making friends — and that he doesn’t meet the insanity standard needed to clear him of responsibility. They say he had several chances to stop his car on a bustling day in Times Square but ruthlessly kept going until he crashed.

The prosecution case that ended late last month focused largely on harrowing accounts of victims who survived the carnage in Times Square.

It was “like somebody just floored it. … It was so loud,” Jyll Elsman told the jury. “That is the last thing that I remember before everything went black.”

When Elsman came to her senses, she desperately searched for her teen daughters only to find a mother’s nightmare. One of her children was dead and another severely injured — carnage left by a driver who plowed through pedestrians on what had begun, for a Michigan family, as a mundane tourist outing in Times Square in 2017.

Elsman, her daughters Ava and Alyssa, and a family friend were seated on the red bleachers in the middle of Times Square moments before tragedy struck.

The group was walking and “just looking around, kind of eyeballing someplace to eat,” when a car mounted the sidewalk, Elsman said. She testified she felt herself getting knocked down by the car, briefly going blank and then pulling herself up to look for her daughters.

The mother found Ava, then 13, on the ground but still alert. She then rushed around to look for Alyssa, who was 18. What she found was devastating.

“I looked at her eyes and I just knew she was dead. They were fixed. They weren’t looking around,” she said. “All I could do was scream.”

Thomas Patterson, an actor on his way to a rehearsal that day, took the witness stand to recall vivid memories of the mayhem.

“I saw somebody being thrown 25 feet into the air, people being knocked around. It was an intense sight,” Patterson said.

On impulse, “I ran after the car,” he said. “I’m not super proud of that. I don’t know what I was thinking.” He said he gathered himself and stopped to call 911.

Ava, the younger Elsman daughter, was mowed down in a similar way. She recited her injuries for the jurors: broken ribs, collapsed lung, a compound leg fracture and other harm that kept her off her feet for months.

She said a deeper injury occurred in the hospital, when she asked her mother about what happened to her older sister. She was answered with silence.

Her mother’s “face dropped,” she said. “And with no words, I knew exactly what had happened.”

The survivors' harrowing stories were central to the ongoing trial of Rojas.

Richard Rojas, 26, was taken out of a police precinct Thursday evening as officers transferred him to another stationhouse. Police say he was behind the wheel of a car that sped through Times Square, killing a woman and injuring dozens more people.

Meanwhile, the defense drilled down on Rojas’ troubled past to try to convince the jury he was too sick to know what he was doing.

Rojas' mental state at the time of the horrific incident was also a central topic during the trial. He admitted that he was the person who drove onto the sidewalk and plowed through pedestrians, but defense attorneys pointed to his history mental illness, which made him unable to understand the consequences of his actions.

The defense also said he was high on PCP at the time.

After Rojas was kicked out of the Navy, he began sharing disturbing thoughts that were coursing through his head — that cars were following him, that aircraft were dusting him with chemicals, that his meals were poisoned.

At the outset, state Judge Daniel Conviser floated the possibility of a paradoxical outcome in the Rojas case: Jurors could find Rojas guilty, while at the same time deciding that he “lacked responsibility by reason of mental disease or defect.” The judge said the finding would qualify him for an open ended “involuntary mental commitment” instead of a lengthy prison term.

An uncle, Ramon Reyes, said Rojas offered a self-diagnosis: “You know that I’m crazy. And they’re not giving me the help that I need.”

Whether Rojas was correct about his mental condition was at the crux of the trial in New York.

A key defense witness has been Ziv Cohen, a psychiatrist on the faculty at Weill Cornell Medical College and at Columbia University, who diagnosed Rojas as schizophrenic. Unlike more common psychological disorders, schizophrenia is “a brain disease, so it’s a chemical imbalance in the brain” that made Rojas prone to hallucinations, Cohen testified.

While in the Navy, Rojas began to hear voices, the doctor said. In particular, he was hearing from “James” — a “supernatural, God-like figure who had special information,” he testified.

On the day of the rampage, his imaginary guide told Rojas he needed to crash his car into “spirits” around him in order to send them to heaven and to release Rojas “from the torture that he is experiencing as part of his psychosis,” he testified.

“At a certain point, the psychosis becomes so severe that he can’t control his behavior anymore,” he said.

Family members testified about their despair over seeing Rojas disintegrate after he was discharged from the Navy in 2014 — the result of a court martial stemming from an arrest for beating a cab driver.

A brother, Wilmer Veras, took the witness stand to recall how a delusional Rojas was obsessed with keeping tape over his phone and laptop camera lenses in case he was being watched. When out in the world, he would “look for things that weren’t there” and “say people were following him around.” He even accused Veras of “doing voodoo on him.”

At that point, “I told him he really needed to get help; that he was really losing it,” Veras said.

The uncle, Ramon Reyes, recounted a phone call a few days before the Times Square crash in which Rojas asked for help. Reyes told him to come by his home the next day so he could take him to a doctor, but “he never showed up,” he said.

When a relative contacted Reyes saying she saw a TV report about an arrest that had images of someone who looked like Rojas, the uncle began frantically calling his nephew hoping it wasn’t him, he testified. The uncle was asked if Rojas ever picked up.

“No,” the witness responded, then wept.