China, with the world’s No. 2 economy, was decelerating even before the coronavirus hit

This should be peak season for a 12-room hotel near the train station in the Chinese industrial hub of Wuhan. The Chinese New Year usually brings in plenty of travelers and delivers profits of around $3,000 a month.

But the place is empty. Wuhan, the center of a deadly viral outbreak, is on lockdown. “There is not a single customer,’’ said the hotel’s owner, who gave only his surname, Cui. He still has to pay rent and his utility bills. Instead of counting his earnings, he’s expecting to lose $1,500 a month.

The outbreak arrives at a bad time for Wuhan, China and the world economy.

China, with the world’s No. 2 economy, was decelerating even before the coronavirus hit.

And the world economy is coping with an unexpectedly sharp slowdown in No. 7 India, which prompted the International Monetary Fund last week to downgrade its outlook for global growth this year.

The coronavirus is drawing comparisons to the SARS outbreak, which paralyzed the economies of China and Hong Kong for weeks in 2003. But what happens in China carries a lot more weight these days: In 2003, China accounted for 4% of global output. Now its share is 16%, according to the World Bank.

“A growth slowdown in China could have sizable ripple effects across Asia and the rest of the world, given the size of China’s economy and its role as the key driver of global growth in recent years,” said Eswar Prasad, a Cornell University economist and former head of the International Monetary Fund's China division.

No one knows exactly how the outbreak will play out or what its economic impact will be.

Authorities are still trying to better understand the new virus. It is from the coronavirus family, which also can cause the common cold as well as more serious illnesses such as SARS.

So far, China has confirmed more than 4,500 coronavirus cases and more than 100 deaths. 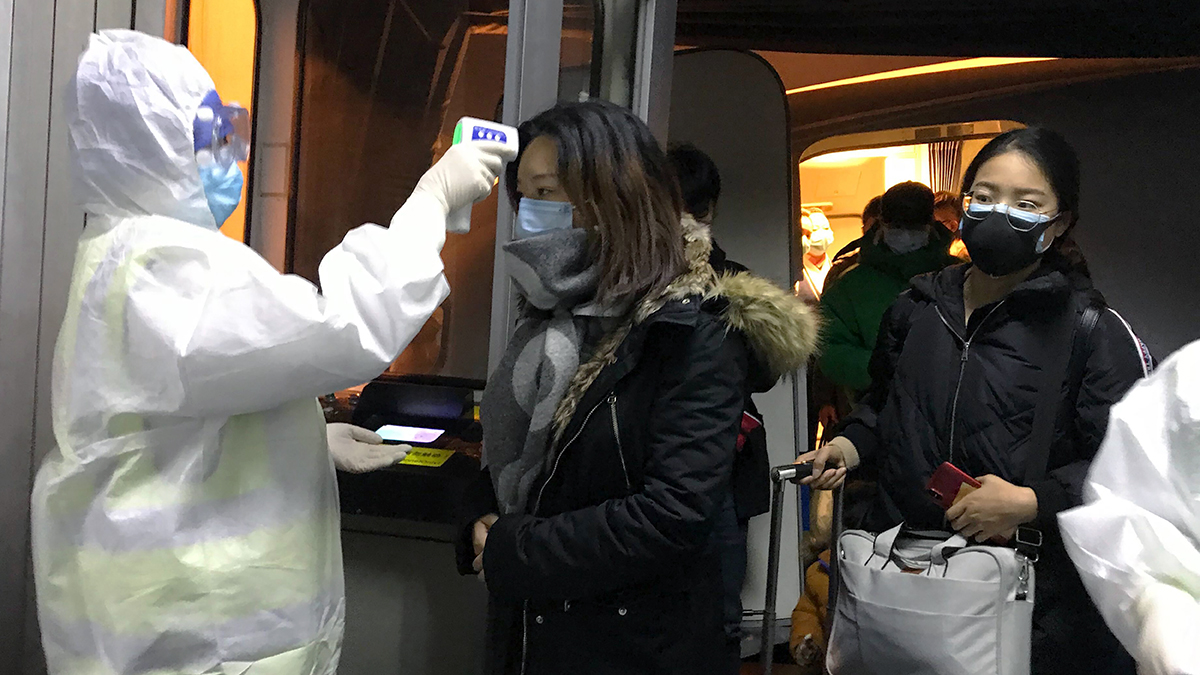 Viral Outbreak in China: What to Know

The Chinese government has locked down Wuhan and 16 other cities in Hubei province, isolating more than 50 million people. The United States and other countries prepared Tuesday to airlift their citizens out of Wuhan. The outbreak has brought every day business to a standstill and closed down such popular tourist attractions as Beijing's former imperial palace, Shanghai Disneyland, Hong Kong Disneyland and the city's Ocean Park.

The significant decline in travel has already caused United Airlines to suspend some flights to Beijing, Hong Kong and Shanghai, the airline said in a statement.

“It’s still too soon to measure what the impact is going to be from an economic perspective,’’ said Jim Baird, chief investment officer at Plante Moran Financial Advisors.

The SARS experience offers some reason for economic optimism. That outbreak, centered in southern China, initially clobbered the Chinese economy. In the April-June quarter of 2003, China’s economic growth dropped to an annual rate of 9.1% from 11.1% the previous quarter, noted economists Tommy Wu and Priyanka Kishore of Oxford Economics. But as the health crisis subsided, growth picked back up, recovering to a 10% annual rate in the second half of the year.

“From what we know, it’s likely to be similar this time,’’ said Andy Rothman, investment strategist at Matthews Asia. “People shouldn’t get panicked that growth is going to slow sharply’’ over a sustained period.

Still, the Chinese economy isn’t the dynamo it was in the early and mid-2000s when growth routinely hit double digits.

The IMF expects China’s growth to drop from 6.1% in 2019, already the slowest since 1990, to 6% this year and 5.8% next. The slowdown reflects China’s difficult transition from fast but unsustainable growth built around often-wasteful investments to steadier but less striking growth built on consumer spending by the country’s growing middle class.

The Chinese economy has also been buffeted by a trade war with the United States. The two countries signed a truce earlier this month that was expected to provide some economic relief. Then the viral outbreak hit.

As part of the so-called Phase 1 deal, China agreed to increase purchases of U.S. products by $200 billion over this year and next. That goal sounded ambitious even before the viral outbreak isolated tens of millions of Chinese consumers and delivered a wallop to consumer and business confidence.

Rothman suspects the United States might give the Chinese a little leeway. “Both governments really want the deal to work,’’ he said. “Ïf it is clear that (Chinese purchases) are off to a slow start not because the Chinese government is not trying its best but because of the virus, the Trump administration is likely to be sympathetic.’’

There has been no immediate impact on China’s vast manufacturing industries because factories already were closed for the Lunar New Year holiday and weren’t due to reopen until this week or later.

“I think the first quarter looks like it will take quite a significant hit,” said Rajiv Biswas, chief Asia economist for IHS Markit. “This still is escalating, so it’s hard to talk about when this will be contained.”

Further delays in restarting production could send shock waves through Asian suppliers of components and exporters of iron ore, copper and other commodities as far away as Australia, Brazil and Africa.

Foreign suppliers usually see a surge in Chinese orders as factories restock after shutting down for 10 days or more during the holiday.

“The loss of economic output could be quite substantial, and that has consequences for the Asian manufacturing supply chain, because orders won’t come in the way people expect,” Biswas said.

The impact in other developing Asian countries might reduce their 2020 economic growth by 1.5 to 2 percentage points, according to a forecast by Edward Glossop of Capital Economics.

Growth in Asian emerging markets “will slow sharply in the first quarter of the year,” Glossop said in a report.

Japanese Economy Minister Yasutoshi Nishimura told reporters Tuesday that Japanese exports, production and corporate profits could be pinched by the new virus, stressing that he was closely monitoring the situation.

A more direct hit is already coming from the decline in tourist traffic from China. Nishimura said Chinese travelers usually account for about a third of tourists from abroad.

Chinese tourists to Japan tend to be relatively big spenders. The virus has hit right at the time when Chinese travel for the lunar new year.

Japan’s economy suffered from the SARS outbreak in 2003, but the damage was limited to several months. The big difference is that Japan has far more Chinese tourists these days.

Now “the impact on the Japanese economy would be far greater,” said Takahide Kiuchi, executive economist at Nomura Research Institute, while adding that much depends on how widespread the outbreak proves to be.

“There is hardly anything good that can be hoped for economically because of the new virus,” he said. Increased sales of masks and other protective gear, he noted, will hardly pick up the slack.

Wiseman reported from Washington, McDonald from Beijing and Kageyama from Tokyo. AP researcher Yu Bing in Beijing and AP Airlines Writer David Koenig in Dallas contributed to this report.