Nine months after she stepped into the job of New York governor as a relative unknown, Democrat Kathy Hochul easily locked up her party's nomination Tuesday, setting her on an expected glide path to win the office in November.

Hochul was serving as an under-the-radar lieutenant governor under the shadow of former Gov. Andrew Cuomo until last year, when he resigned amid sexual harassment allegations, catapulting her into office.

In a nod to the barrier-breaking campaign, Hochul gave an election night speech Tuesday on a stage underneath a glass ceiling at an event space in Manhattan.

Hochul enters the general election campaign with a big advantage, running as the incumbent with a heavy fundraising advantage in a state that has more than twice as many registered Democrats than Republicans and has not had a GOP governor in 16 years.

Nine months after she stepped into the job of New York governor as a relative unknown, Democrat Kathy Hochul easily locked up her party's nomination Tuesday, setting her on an expected glide path to win the office in November.

Track live election results here and learn more about the candidates and where they stand on the issues here.

She faces U.S. Rep. Lee Zeldin, who won the Republican Party’s nomination Tuesday. Zeldin is a staunch ally of former President Donald Trump and was among the Republicans in Congress who voted against certifying the 2020 election results.

“Are we ready to fire Kathy Hochul?” Zeldin said to cheers as he spoke at a victory party on Long Island.

The Long Island congressman will try to become the first Republican elected governor in New York since Gov. George Pataki was reelected in 2002.

Her prospects are expected to be even stronger this fall after the U.S. Supreme Court last week overturned the Roe v. Wade decision establishing abortion rights. She has made bolstering abortion rights a key plank of her campaign.

Hochul repeated that in her Tuesday night speech, proclaiming that the state had “gone on offense to protect abortion rights" and "making the world know that New York State is a safe harbor for America’s women.”

“We must answer one question," she said. "Are we going to move New York forward, or let the far-right extremist drag our state backwards?”

Tuesday's elections cover New York’s statewide offices and state assembly races, but primary contests for U.S. House seats and the state Senate will be held on Aug. 23. Those were delayed because of a redistricting lawsuit that led a court to throw out new political maps.

Turnout was light in New York City, with the city board of elections reporting about 370,000 voters checked in to vote by 6 p.m. The city has more than 4 million registered Democrats and Republicans combined who are eligible to vote in the primaries. Light turnout was also reported in the Buffalo-area and in Long Island's Nassau and Suffolk counties. 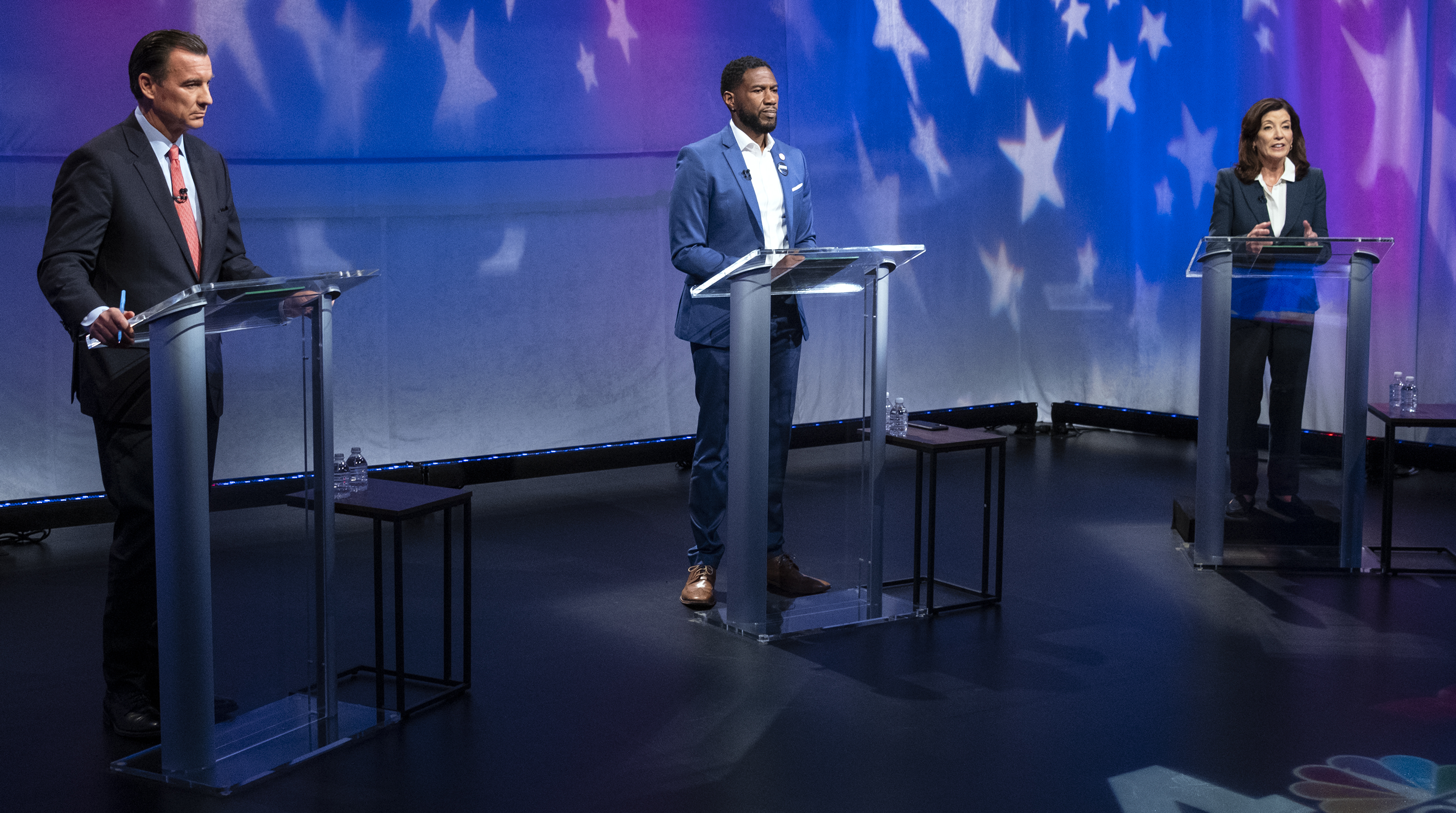 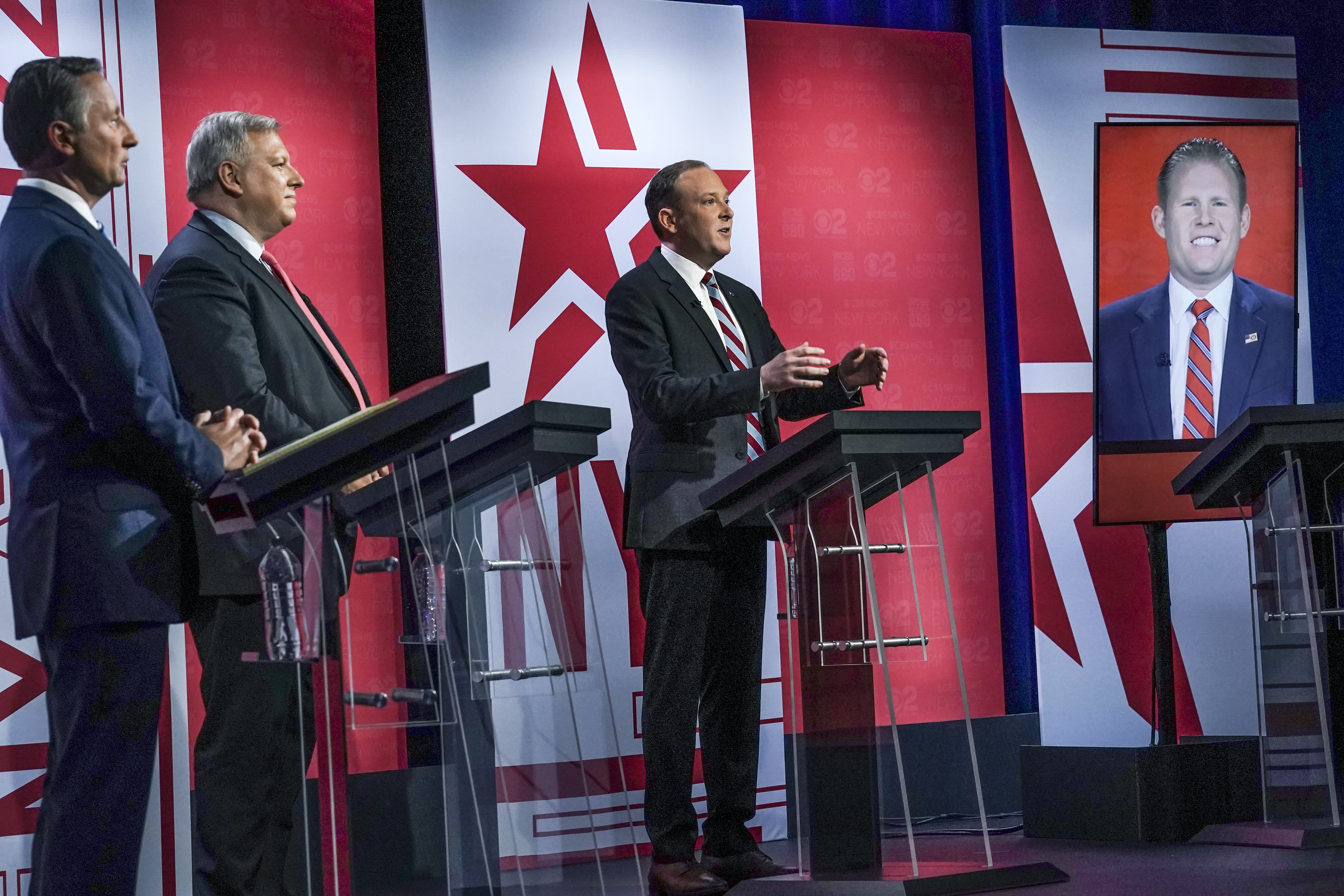 Hochul, who was Andrew Cuomo’s lieutenant governor for six years, promised to restore New Yorkers’ faith in its government after stepping into the office last summer, but she hit a stumbling block in April, when her handpicked lieutenant governor, Brian Benjamin, was arrested in a federal corruption probe.

Benjamin pleaded not guilty and denied wrongdoing. Hochul pointed to the short time frame she had to pick a No. 2 and said she had been assured that any questions previously raised about Benjamin’s campaign fundraising had been resolved.

Hochul replaced Benjamin with Antonio Delgado, who stepped down from his seat in Congress to accept the role. Delgado, also Hochul's choice for a running mate, won his primary Tuesday.

Since taking office in August, Hochul has sought to step out from Cuomo's shadow, promising a clean break from his administration. She has said she was not close to the former governor, who has denied wrongdoing, and was not around to witness any alleged misbehavior.

Still, Cuomo’s presence loomed over her campaign early on when he began making public appearances this past spring, criticizing Hochul and Democrats in Albany over their approach to crime and suggesting he might run for his old job. Despite suggesting he might run as an independent, the former governor ultimately did not file to run.

Suozzi, a centrist who did not shy away from embracing Cuomo, was the only Democrat on the debate stage to say he would accept the former governor’s endorsement and said he was still “very popular” despite his “baggage.” He also echoed Cuomo’s comments calling for Hochul to toughen the state’s bail laws.

Hochul focused her campaign on steps she took to bolster abortion rights and moves to toughen the state’s gun laws after a racist mass shooting in Buffalo.

Suozzi and Williams criticized her for her endorsement a decade ago from the National Rifle Association and over her plan to spend more than $1.1 billion in state and county funds on building and maintaining a new stadium for her hometown Buffalo Bills.

Suozzi opted to run against Hochul instead of running what was expected to be a tough reelection race for his House seat this year. He made one unsuccessful run for governor before in 2006, but lost the Democratic nomination to Eliot Spitzer.

Williams, the most unabashedly progressive in the race, was often seen wearing a “Stay Woke” button on his lapel. He has been arrested several times for civil disobedience at demonstrations against immigration enforcement and police misconduct.

“This November, in the state of New York, one-party rule will end," he said. "Kathy Hochul will get fired. We will restore balance and common sense to Albany again.”

He has focused his campaign on rising crime and criticized Hochul for not toughening the state’s bail laws, for imposing COVID-19 mitigation mandates and for rising costs. And despite Hochul seeking to project a fresh start from Cuomo, Zeldin has referred repeatedly to the “Cuomo-Hochul Administration.”

“New Yorkers are hitting their breaking point. They’re deciding whether or not to stay here or head to other places," he said.

He will have to persuade the state’s independent voters, which outnumber Republicans, along with Democrats in order to win the general election. Democrats are expected to focus on Zeldin’s vocal defense of Trump during both of his impeachments and objection to the election results. Hochul is also likely to focus on Zeldin’s statements praising the U.S. Supreme Court ruling overturning Roe v. Wade and his comment that, as governor, he would appoint an anti-abortion state health commissioner.

A new poll shows Democratic incumbent Kathy Hochul expanding her lead, but the race is a lot closer on the Republican side. Melissa Russo reports.

His most high-profile challenger is Andrew Giuliani, the 36-year-old son of former New York City Mayor Rudy Giuliani, who frequently campaigned for his son.

Though Rudy Giuliani was once hailed as a national hero for leading the city through 9/11, he’s become a deeply divisive figure in New York for his work to try to overturn the results of the 2020 election.

The younger Giuliani often repeated his father’s baseless claims that Trump won the 2020 election. Giuliani has never run for public office but worked as an aide in Trump’s White House and then as a commentator on the conservative network Newsmax.

He first gained public attention as a child when he stood next to his father at the elder Giuliani’s 1994 mayoral inauguration, mimicking his gestures and repeating some of his words. His antics as a 7-year-old were parodied on “Saturday Night Live" by Chris Farley.

"On day one, I will sit down with (Andrea) Stewart-Cousins and (Carl) Heastie, and tell them I need a full repeal of bail on my desk or I am not signing your top priorities," Giuliani said Monday.

The other Republican candidates include former Westchester County Executive Rob Astorino, a conservative former radio show host and radio executive, and businessman Harry Wilson, who served as a U.S. Treasury Department advisor under former President Barack Obama. Wilson is the most moderate of the GOP field and was the only candidate of the four Republicans who said he supports abortion rights.

In addition to his time in local office, Astorino is a conservative former radio show host and radio executive. Wilson served as a U.S. Treasury Department advisor under former President Barack Obama, and is the most moderate of the GOP field. He was the only candidate of the four Republicans who said he supports abortion rights.

"It is not enough to just nominate a politician who will just say no to the other side, like any other Republican would," Wilson said.