There are less than two weeks left before the Democratic primary in the race for New York governor — and with early voting starting this weekend, each of the candidates was looking for a boost in Thursday's debate.

The evening grew tense at times, with a restrained Hochul repeatedly asking Suozzi to stop interrupting her. Watch the entire debate in the video player below.

Suozzi and Williams criticized Hochul's strategy toward gun violence, with Suozzi questioning Hochul on her support and donations from the National Rifle Association when she served in Congress from 2011 to 2013.

After a racist shooting May 14 that left 10 people dead at a Buffalo supermarket, Hochul has signed new gun laws, including raising the age for buying and possessing semiautomatic firearms to 21 and requiring licenses.

Williams said Hochul and other lawmakers have focused on mass shootings while having yet to effectively address the complicated, daily reality of handguns and out-of-state firearm trafficking.

"I was in the street trying to address this violence. And what we said each time when the violence happened is that simply adding police wouldn’t help," Williams said.

Suozzi continued to go after Hochul, saying that "people are not safer – under this administration, they're not safer, they don’t feel safe. The governor has not made crime a priority." She called subway safety "paramount" in helping people feel secure, and getting them back to working in person.

And Suozzi pressed Hochul on her vote in Congress to defeat a Democrat’s federal amendment to make it harder to bring concealed weapons across state lines.

“We’ve been waiting months for you to answer this question,” Suozzi said.

“Please stop interrupting me, the people want to hear my answer,” Hochul responded.

Tom Suozzi and Jumaane Williams tried to use Thursday's debate to show that they can tackle corruption, crime and gun violence better than Gov. Kathy Hochul.

Hochul, who hails from Buffalo, said that she has “evolved” and that voters are more interested in her agenda as governor now, rather than her political stances a decade ago.

But Suozzi charged that Hochul has shifted her policy stances to suit whatever office she's held. Suozzi also criticized Hochul’s vow as Erie County clerk in 2007 to arrange for the arrest of immigrants living in the country illegally if they applied for a driver’s license.

“The only thing that's changed are the governor's political ambitions," Suozzi said.

Their back-and-forth did not stop there, however. The question of whether school districts should be required to teach elementary students about sexual orientation led to more fireworks. Hochul blasted Suozzi for saying he wouldn't have students taught about it before fifth grade, equating it to supporting the Don't Say Gay laws in Florida.

New York Gov. Kathy Hochul, who is running for election to the post after assuming it following Andrew Cuomo’s resignation, faced off Thursday in a final debate with two of her fellow Democrats, U.S. Rep. Tom Suozzi and New York City’s elected public advocate, Jumaane Williams, who are challenging her in the race.

When asked about his previous personal opposition to abortion and same-sex marriage, Williams argued his past stances didn’t directly harm people.

Early voting starts Saturday in New York, where Democrats will weigh in on their party’s future in a race that has pitted the state’s moderate, first female governor against a centrist Long Island congressman and a progressive New York City official.

Hochul came into the debate touting a new endorsement from New York City Mayor Eric Adams, a fellow Democrat; newly signed laws protecting abortion providers and patients; and a spot atop the latest of a string of polls suggesting she has outsize support ahead of the June 28 primary.

"Let’s put Kathy Hochul back to the governor's mansion. I strongly endorse her," Adams said Wednesday.

He and Hochul have gotten along well since she took office nine months ago — quite the contrast compared to the contentious relationship between former mayor Bill de Blasio and former governor Andrew Cuomo.

Adams had delayed making an endorsement, however. While Williams has clashed with the mayor on police policy, Suozzi is considered a close ally of Adams who considered a job in the Adams administration before launching his campaign.

"I still consider Eric Adams a brother, but if he wants to stop surging crime in NYC he will need a new governor in Albany who will fix bail reform. I will," Suozzi said after Hochul got the mayor's endorsement.

Adams said there was no bad blood between him and Suozzi, and called him a brother as well.

"We are still brothers...I love Tom," the mayor said. 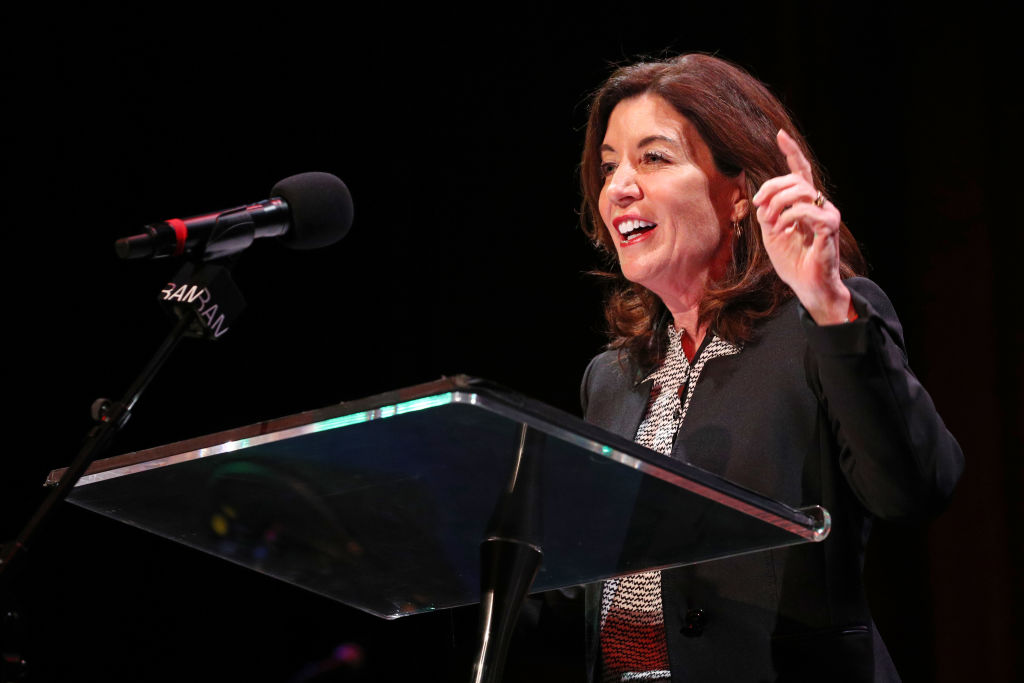 Suozzi has said he’ll again make the case that he’ll succeed where he says Hochul has failed on tackling crime and affordability in New York state. The accountant and attorney wants to reduce Medicaid costs, create a public bank to help underserved communities access loans, and push for high-speed rail across the Northeast.

Hochul also sent out property tax rebate checks earlier than usual to New Yorkers ahead of the primary alongside letters that say the checks were provided by “Gov. Hochul and the New York State Legislature.”

Hochul has a steep fundraising advantage as of late May, when she reported an $18.6 million campaign war chest. That dwarfed Suozzi’s $5.25 million and Williams’ $130,000.

New York Gov. Kathy Hochul, who is running for election to the post after taking it on following Andrew Cuomo’s resignation, faced off Thursday in a final debate with two of her fellow Democrats, U.S. Rep. Tom Suozzi and New York City’s elected public advocate, Jumaane Williams, who are challenging her in the race.

Williams and Suozzi slammed Hochul for continued controversies in Albany, including the $850 million in taxpayer funding she announced for the new Buffalo Bills stadium and the resignation of her former lieutenant governor, Brian Benjamin, following corruption charges he denies.

Hochul has defended the Bills funding as a way to boost jobs in western New York.

“We’re disappointed in a lack of judgment you used,” said Suozzi, who criticized Hochul for picking Benjamin last fall despite questions at the time over ethics issues.

Hochul acknowledged she should have done a better job of vetting Benjamin, saying during the debate it was the biggest mistake of her career. But she pointed out that Suozzi himself has been under investigation.

"The word hypocrisy comes to mind...You're not in a position to lecture anyone about ethics," Hochul said.

The House Ethics Committee has probed Suozzi over allegations that he failed to properly disclose various stock transactions. The congressman said that the issue pales in comparison to the Bills deal she made.

Both Williams and Hochul said they wouldn't accept an endorsement from Cuomo, who resigned to avoid a likely impeachment trial after a report finding he sexually harassed women.

Suozzi said he would accept Cuomo's backing because of his record as governor. Suozzi said Cuomo's still “very popular” despite his “baggage.”

News 4's Andrew Siff has another update on the face off between the Republicans candidates running for Governor in New York.

On the Republican side, four candidates pledged to undo years of one-party rule and focus on battling crime and improving the economy if elected to office during their debate on Monday.

The GOP field includes U.S. Rep. Lee Zeldin, former Westchester County Executive Rob Astorino and businessman Harry Wilson. Candidate Andrew Giuliani, the son of New York City’s former mayor, appeared remotely after he said he had been barred from participating in person because he refused to submit proof he’s been vaccinated against COVID-19.

It’s an uphill battle for Republicans vying for the governor’s office in New York, where registered Democrats outnumber registered Republicans by more than 2 to 1. The state’s last Republican governor was George Pataki, who served from 1995 to 2006.

Astorino, a Republican former radio industry professional and two-term Westchester County executive, is running for governor for a second time. Zeldin, a Trump ally and an Army veteran who has represented New York’s 1st Congressional District since 2015, has accused Democrats of being soft on criminals and overzealous in imposing safety protocols intended to fight COVID-19.