A line of strong storms moved into the tri-state Saturday evening, threatening to bring gusty winds and lightning.

There was less of the latter as the storms descended upon New Jersey by the late afternoon and pushed east. After 5 p.m., most of the tri-state was under a severe thunderstorm warning.

Few warnings continued past 6 p.m. but the potential for additional rainfall should linger well into the night.

What started out as a dry and warm Saturday shifted quickly for those unaware to the empending stormfront. Skies darkened and rain dropped with gusts in company.

Winds in Orange County were spotted lifting debris above a number of stores at the height of the warnings.

The Federal Aviation Administration confirmed ground delays at Newark and LaGuardia due to weather conditions -- JFK was only dealing with delays.

Showers could continue throughout the evening, but are expected to finish up by around midnight.

Things cool down on Sunday, with temperatures back down into the more seasonable mid 60s. Even after Saturday's storms move out, expect those wind gusts to linger through Monday. 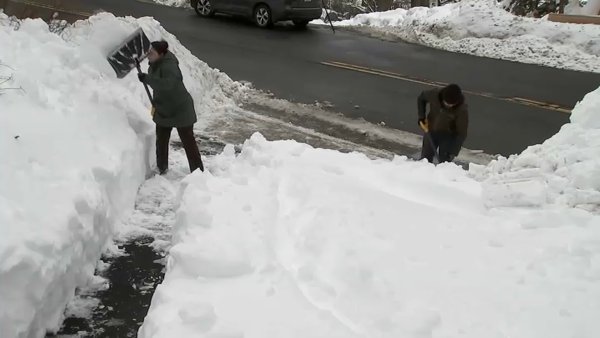 It will warm up by the middle of the week, with temperatures hitting 70 once again for Wednesday and Thursday before showers possibly return for Friday, bringing it back down into the 60s once again. But partly cloudy skies return in time for next weekend.