A spokesman for Cuomo, Rich Azzopardi, dismissed the idea of an investigation as a political stunt

Specifically, the letter referred to allegations that "public resources may have been used in the development of the governor's book."

A spokesperson for James, whose office is conducting a separate independent investigation into sexual harassment allegations against the governor, confirmed receipt of the referral but would not comment further on an "ongoing investigation."

In the letter, which was dated April 13, the comptroller wrote, "I hereby request that your office investigate the alleged commission of any indictable offense or offenses in violation of the law occurring or commencing prior to the dates of this referral related to the use of property, services or resources of the state for personal purposes, private business purposes or other compensated non-governmental purposes by the Executive Chamber including, but not limited to, in the drafting, editing, sale and promotion of the governor's book and any related financial or business transactions.

"I further confer to you the authority to prosecute the person or persons believed to have committed the same and any crime or offense arising out of such investigation or prosecution of both, including but not limited to appearing before and presenting all such matters to a grand jury," DiNapoli added – and pledged the assistance and cooperation of his office in a potential investigation if necessary.

Cuomo's manuscript, "American Crisis: Leadership Lessons from the COVID-19 pandemic," landed on the New York Times' best-seller list after it was released in mid-October.

The governor was asked about his book at a late-morning news conference Monday before the latest development emerged. Specifically, he was asked how much money he received for it and whether any government officials helped him write it.

To the first point, the embattled governor said any monetary details related to the book would be revealed in his next personal income tax filing. He says he has made those public for roughly the last 20 years and will do so again. 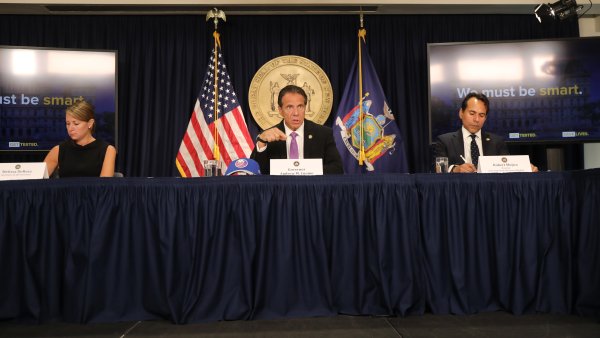 To the latter question, Cuomo said, "Some people volunteered to review the book. You look at the people who are mentioned in the book, I wanted to make sure they were ok with the book, that it represented what they did and represented the facts."

A spokesman for Cuomo, Rich Azzopardi, dismissed the idea of an investigation as a political stunt.

“We have officially jumped the shark,” he said in a statement. “The idea there was criminality involved here is patently absurd on its face and is just the furthering of a political pile-on. Any state official who volunteered to assist on this project did so on his or her own time and without the use of state resources.”

“This is Albany politics at its worst,” he added. “Both the Comptroller and the Attorney General have spoken to people about running for Governor and it is unethical to wield criminal referral authority to further political self-interest‎.”

He had to write the book on “his own time and not on state time,” according to state ethics rules. And, “no state property, personnel or other resources” could be used.

Yet, several people who work for the state did work on the book, including Secretary to the Governor Melissa DeRosa and the Director of Governor’s Offices Stephanie Benton, according to reports in The New York Times, The Times-Union, of Albany, and the USA TODAY State News Network.

Cuomo’s office hasn’t provided direct responses to a list of questions from The Associated Press about which aides were involved with the book, or the type of work they did.

Azzopardi has said Cuomo’s office made every effort to ensure no state resources were used.

Still, the Siena poll found a growing majority of New Yorkers believe he should not resign; some 51% of voters oppose it and 52% believe he can still govern effectively. Both are up slightly from the school's March poll.

Cuomo's favorability rating fell to 40% in the new poll, while his unfavorability rating hit 52% – the first time it has ever crossed into a majority in Siena's polling of him. There was a sharp jump in those who believe the governor did commit sexual harassment, at 44% – up nine points from March.

The governor addressed the poll Monday when questioned by reporters at the same briefing where he was asked about the book.

"I don't know how people can say 'I think you're doing a good job,' but the favorable goes down. They do these polls all the time. The truth is I don't put too much stock in them," Cuomo said. "I'm going to focus on my job, that's what I've always done."

The third-term governor is steadfast in his refusal to step down, despite calls to do so from the overwhelming majority of his fellow elected New York Democrats. He has instead placed his faith in the voters, rebuffing all opposition from even nominal allies.

The question remains whether he will still seek a fourth term next year, as he originally intended. Siena found limited and shrinking support for that; only 33% said they would be prepared to re-elect him next year if he runs. That's down 13 points from two months ago.

The poll of 801 registered New York voters was conducted April 11-15 and has a margin of error of 4.3 percentage points.