New York filed a lawsuit Thursday accusing the leaders of the National Rifle Association of rampant fraud for their personal benefit, and seeking to have the powerful pro-gun lobbying group dissolved.

The state alleges that NRA leadership, including long-time CEO Wayne LaPierre, diverted millions of dollars in charitable donations for personal use. Over a three-year period, the state claims their behavior cost the group $64 million, using the ill-gotten funds for anything from hair and makeup for his wife to a $17 million post-employment contract for himself.

"Mr. LaPierre exploited the organization for his and his family's personal benefit and a close circle of NRA staff, board members and vendors," New York Attorney General Letitia James said at a news conference announcing the suit.

James said LaPierre and others used the NRA as their "personal piggy bank" and said her office had to act now because they had "destroyed all the assets of the organization."

The organization blasted the lawsuit as little more than a political stunt and said it would fight back aggressively.

“This was a baseless, premeditated attack on our organization and the Second Amendment freedoms it fights to defend,” NRA President Carolyn Meadows said in a statement.

New York's top prosecutor is hoping that a lawsuit could be a bullet through the heart of the NRA. Jonathan Dienst reports.

President Trump also addressed the lawsuit outside the White House, suggesting that the group simply relocate. (The NRA is registered as a not-for-profit organization under New York law, and has been for nearly 150 years, giving James's office jurisdiction to look into its operations.)

James's office has had a long-running investigation into the NRA. The AG issued subpoenas to the group 16 months ago, following a campaign promise to probe its finances.

"It's clear that the NRA has been failing to carry out its stated mission for many, many years and instead has operated as a breeding ground for greed, abuse and brazen illegality," she said at a news conference. "Enough was enough. We needed to step in and dissolve this corporation."

A year ago, the attorney general's office deposed former NRA president Oliver North as part of its investigation -- a deposition the NRA sued to listen in on, unsuccessfully.

More recently, the NRA was forced to cut staff and salaries and cancel major events due to the coronavirus pandemic, limiting what otherwise would have been a major presence in the 2020 election.

James declined to answer a question about whether NRA funds were inappropriately used in any way for a political campaign, but did say her office's investigation was ongoing. The lawsuit made only civil claims, but James said any criminal activity discovered would be referred to prosecutors and the Internal Revenue Service.

The NRA's financial troubles, James said, were long cloaked by loyal lieutenants but became public as deficits piled up. The organization went from a nearly $28 million surplus in 2015 to a $36 million deficit in 2018.

The organization's prominence and cozy political relationships, James said, enabled a culture where nonprofit rules were routinely flouted and state and federal laws were violated. Even the NRA's own bylaws and employee handbook were ignored, she said.

LaPierre, who has been in charge of the NRA’s day-to-day operations since 1991, is accused of spending millions of dollars on private travel and personal security, accepting expensive gifts such as African safaris and use of a 107-foot yacht from vendors and setting himself up with a $17 million contract with the NRA, if he were to exit the organization, without board approval.

The lawsuit said LaPierre, 70, spent NRA money on travel consultants, including luxury car services, and private jet flights for himself and his family, including more than $500,000 on eight trips to the Bahamas over a three-year span.

Some of the NRA’s excess spending was kept secret, the lawsuit said, under an arrangement with the organization’s former advertising agency, Ackerman McQueen.

The advertising firm would pick up the tab for expenses for LaPierre and other NRA executives and then send a lump sum bill to the organization for "out-of-pocket expenses," the lawsuit said.

James' lawsuit portrayed the NRA as the victim of its leaders, and she was asked during a news conference why she would victimize it further by shutting it down, rather than removing or fining its officers. The state attorney general said the "breadth and the depth of the corruption and the illegality" justified the organization’s closure.

She took similar action to force the closure of Trump's charitable foundation after alleging he used it to advance business and political interests.

In addition to dissolving the NRA, the suit seeks to force LaPierre and three other executives — including general counsel John Frazer, retired treasurer and chief financial officer Wilson Phillips, and LaPierre’s former chief of staff Joshua Powell — to pay restitution, and to bar them from ever serving on the board of a New York-registered charity again. 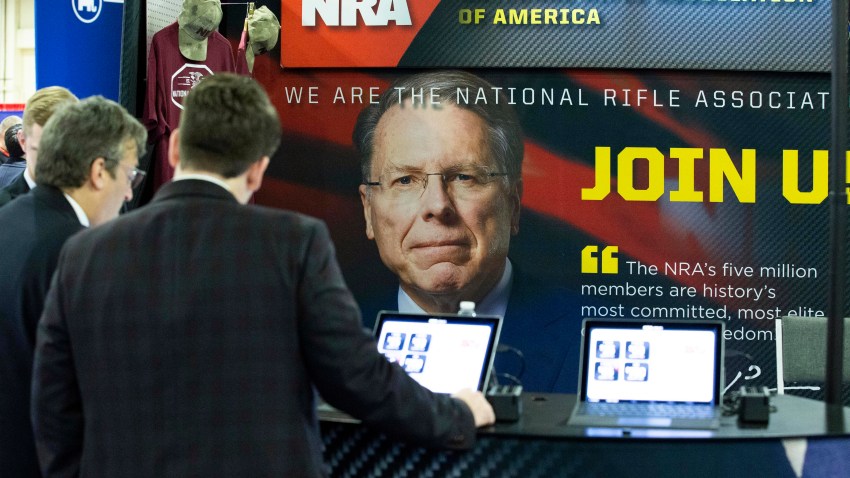