"This situation involves one individual who is determined to harass our lions with no regard for her safety, or the safety of our staff and our guests, and no regard for the well-being of the lions," the zoo's statement said in part

A woman was seen climbing over a barrier at the Bronx Zoo's lion exhibit, witnesses exclusively told NBC New York, as cellphone video showed her holding roses and tossing money toward the fearsome feline. And it wasn't her first such stunt.

The zoo said the alleged trespassing happened around 4 p.m. Thursday. The woman in a blond wig, red dress and leopard-print shawl addressed the animal from about 15 away as if it were a long-lost friend, witnesses said. She carried flowers and threw what appeared to be cash into the air at one point.

"I missed him so much," the woman is heard saying on video.

The woman whose husband recorded the cellphone footage told News 4 that the apparent lion lover said "King, I love you, I came back for you," adding that witnessing the wild stunt was "was definitely surreal."

A spokesperson for the Bronx Zoo said onlookers alerted staff about the woman, but she was gone by the time they got there. The zoo said she was on the other side of a protective moat separating the enclosure from the viewing public, and that she was not in any danger.

"Video shows she crossed a barrier into a planted area near the exhibit. The woman was not in the exhibit as has been falsely reported and she was never in the same space as the lions," a zoo spokesman said in an updated statement Friday.

"This situation involves one individual who is determined to harass our lions with no regard for her safety, or the safety of our staff and our guests, and no regard for the well-being of the lions. We have an NYPD substation in the park and are working closely with them to resolve this situation with this individual," he added. "The Bronx Zoo has a zero-tolerance policy in matters such as this and will aggressively seek prosecution against this individual and anyone who violates park safety rules."

It's unclear if it's the same woman who was charged with trespassing last time for the same stunt. NBC New York's Ida Siegal reports.

But those who go to the zoo often were still alarmed.

"They definitely need better security. If she's able to do that a second time, there's no telling what'll happen the third time. She might not be so lucky," said Leo Morales.

If the bizarre situation seems familiar, that's because it is. In 2019, a woman named Myah Autry went to the very same enclosure — basically to the exact same spot — and appeared to seemingly taunt the lions, raising her arms and wiggling her body for a second as if she was dancing for them. The lion didn't react, just stared at her.

The woman who witnessed Thursday's incident said that based off Autry's Instagram page, where she is sporting blond hair, it appears to be the same woman. And police later confirmed she was indeed the same woman.

They say they're looking for her on a criminal trespass charge.

"I can't believe she did it again, if it even is her. I don't know what's going through people's minds," said Belmont resident Raul Rivera. 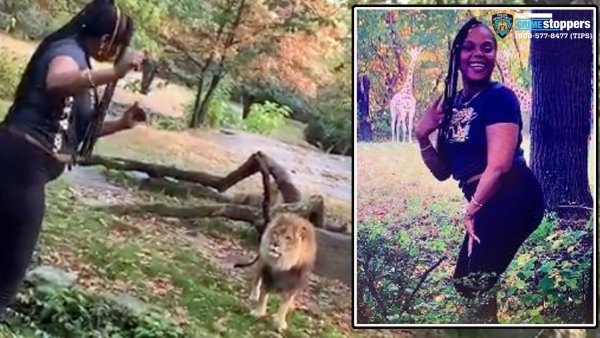 Woman Seen on Video Taunting Lion at Bronx Zoo Turns Herself In: Police

‘I Am The Lion Now': Woman Seen on Video Taunting Lion at Bronx Zoo Speaks Out for First Time

Autry was charged with criminal trespass after that misadventure, where she didn't just limit herself to just teasing the king of the jungle. Another video of her surfaced from the giraffe den, where she's seen waving to the lanky ungulates as they munched on leaves further away.

After 2019's incidents, Autry said in a rambling, 15-minute session outside a courthouse that her reasoning for jumping into the lion’s den was “a lot more spiritual” and that she was never afraid while she was in there.

“I fear nobody. No animal, no human, no one. So no, I wasn’t fearing of the lion because the lion loved me. That’s why he came to me and I let the lion know: Lion, I love you,” Autry said, and later referenced "reincarnation."

This may not have been the first time the woman did it, either. Jessica Cunnington reports.