Many New York City residents now know just how much more they will be paying for their rent, as inflation continues to hit Americans' wallets hard.

The NYC Rent Guidelines Board voted Tuesday night to increase rents for those who live in the city's one million rent-stabilized apartments. The rent hike is the highest jump for rent-controlled apartments in 10 years.

Ahead of the vote, the board had been considering anywhere from a 2-4 percent increase on one-year leases, and a 4-6 percent jump for two-year leases.

The Legal Aid Society had been demanding a rent freeze leading up to Tuesday's vote, and called it a "shameful vote, one which was likely predetermined, to increase rents on our most vulnerable neighbors." The group also the decision will mostly impact "communities of color, across the boroughs who are barely scraping by, disproportionately affected financially by the pandemic and paying exorbitant costs for groceries, medical care and other essential needs."

Legal Aid also criticized New York City Mayor Eric Adams for not doing enough to fight for a freeze, saying it was "wishful thinking given his appointment of known anti-tenant members to the Board."

For his part, Adams said in a statement that the increases will "be a burden to tenants," while small landlords were at risk of bankruptcy without an increase.

"While we raised our voices and were successful in pushing the increases lower, the determination made by the Rent Guidelines Board today will unfortunately be a burden to tenants at this difficult time — and that is disappointing," Adams said in a statement. "At the same time, small landlords are at risk of bankruptcy because of years of no increases at all, putting building owners of modest means at risk while threatening the quality of life for tenants who deserve to live in well-maintained, modern buildings."

The mayor added that the current system is "broken, and we cannot pit landlords against tenants as winners and losers every year."

On Monday, Adams acknowledged how inflation is devastating New Yorkers and expressed his hope that rent board would go with a smaller rent hike -- if any -- as to not decimate New Yorkers. 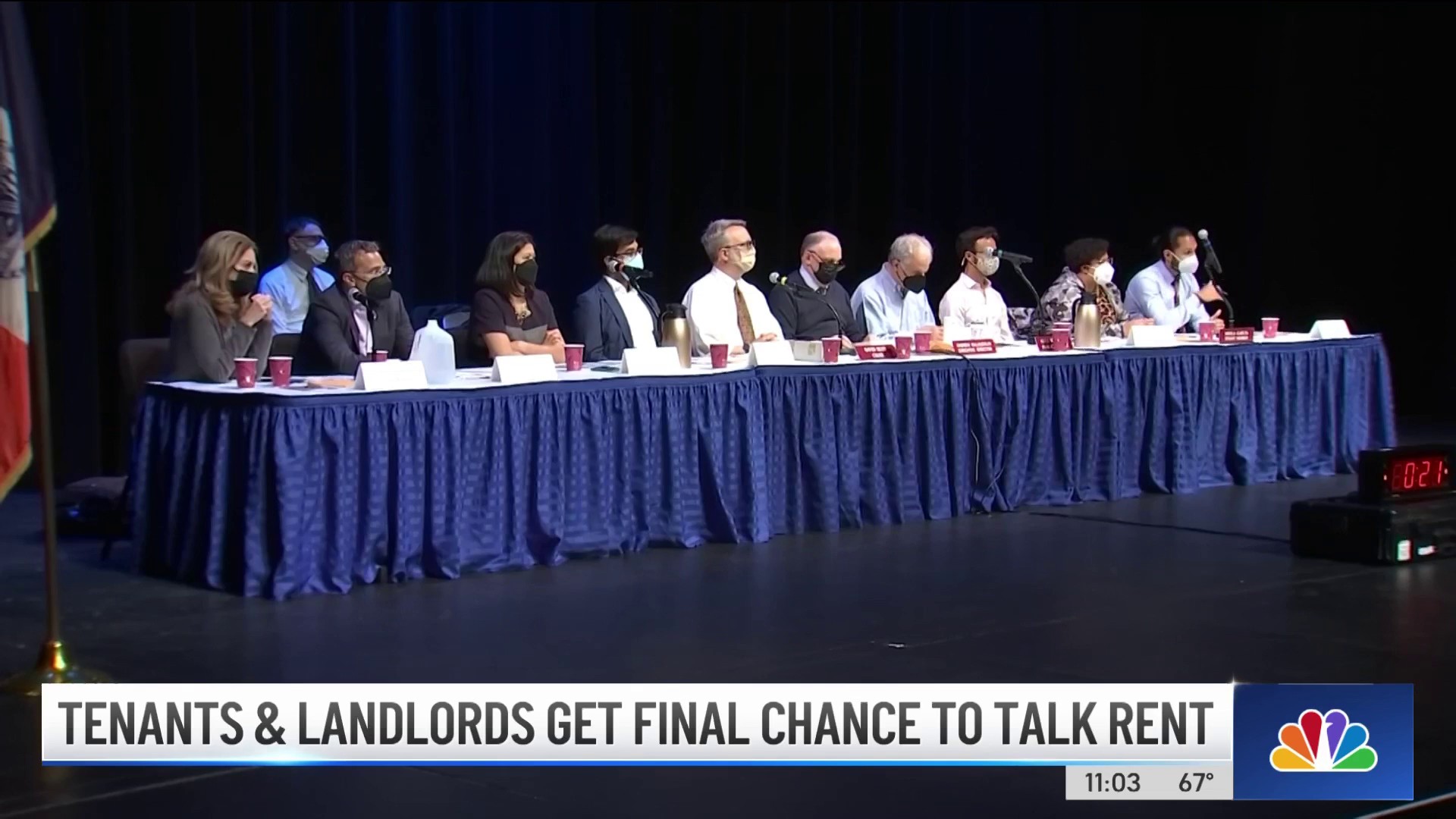 Tenants and Landlords Get Final Chance to Talk Rent 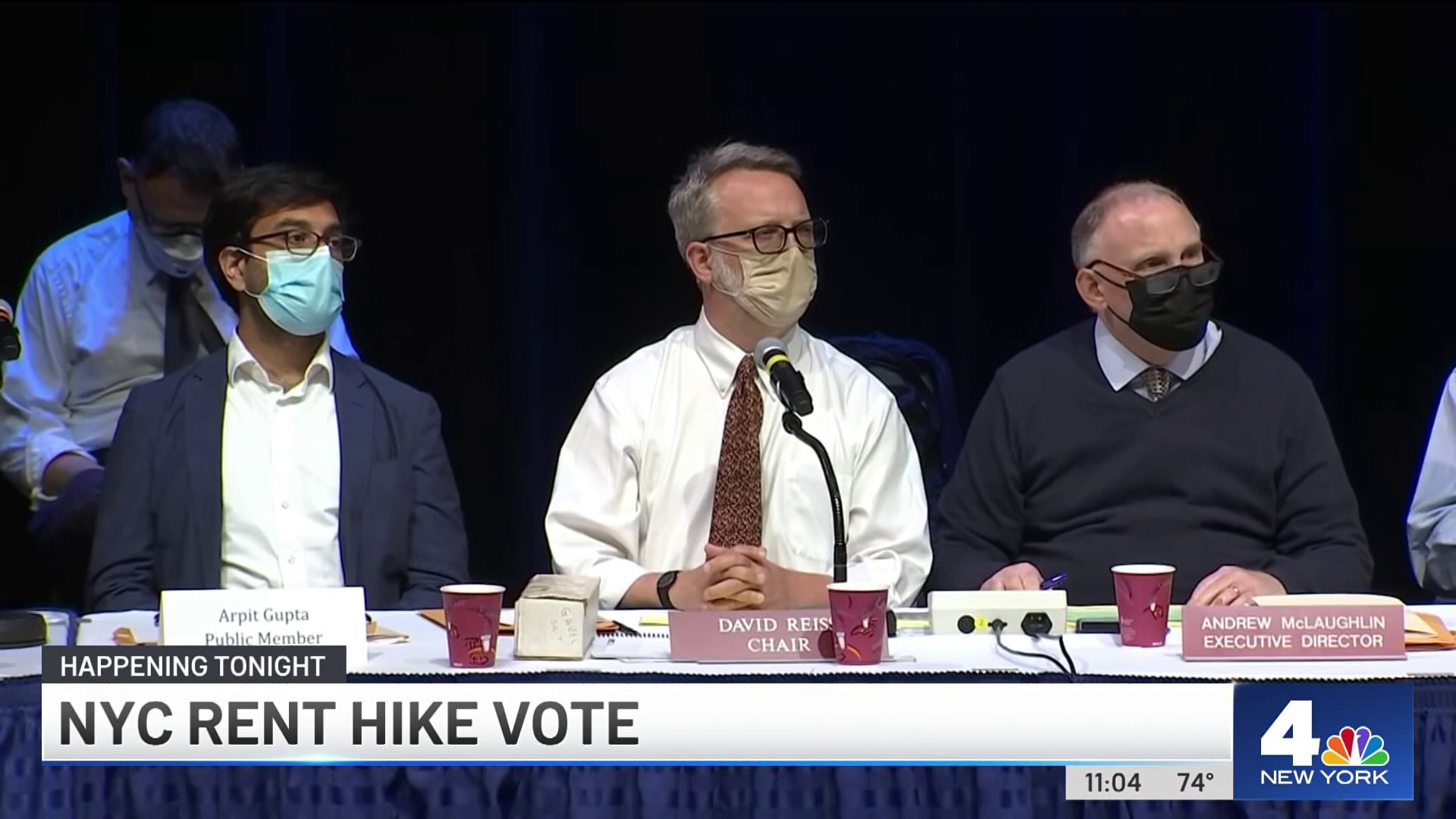 Last week, the Board heard renters express fear that the rent hikes could push the struggling working class into poverty.

The organization Community Action for Safe Apartments condemned the rent hikes saying it directly impacts some of the city's most vulnerable residents. However, the city also heard from landlords who said they are facing rising maintenance and building costs and need help meeting those financial increases.

"Giving them an increase now is not the answer. Many tenants in there haven’t been able to work," said Brooklyn resident Jean Foltes.

"We fight with the landlords, the rats, the roaches, the leaks, the no-gas, the no-heat, the no-hot water — and you wanna give them more money, to do what with?" asked Kim Statuto, of the Bronx.

A crowd of demonstrators and tenants opposed to the hike rallied outside the board vote at Cooper Union's Great Hall, refusing to give in as several of the board members in favor of the rent increase were heckled. The group argued that the rent hike will not benefit smaller landlords, who have said they too have struggled with increased costs.

The new rent increases are set to go into effect in October.

Tuesday's vote took place a few days after the City Council determined that there is indeed a public emergency requiring rent control in New York City, and voted on Thursday to extend rent stabilization laws that were set to expire next month.

The legislation declared that the City Council determined that there is an ongoing housing emergency, and that the emergency will continue after the current expiration of the Rent Stabilization Law, July 1, 2022. Additionally, the introduction of legislation558-A calling for the expiration date of the Rent Stabilization Law to be amended to April 1, 2024, thus allowing for the renewal of rent regulation to follow its ordinary triennial cycle, was approved and is currently waiting Adams' signature.