Derek Jeter watched the last four outs of his final regular-season Subway Series game from the bench, pulled off the field during a double switch in the bottom of the eighth inning Thursday night as the New York Yankees held off the Mets 1-0.

Alfonso Soriano's RBI double in the seventh broke up a scoreless duel at Citi Field between starting pitchers making their major league debuts.

Rookie reliever Dellin Betances struck out six in a row as the Yankees earned a split of this year's series between crosstown rivals with their second straight shutout.

David Robertson got David Wright to ground out to Jeter's replacement at shortstop, defensive whiz Brendan Ryan, with runners at the corners to end the eighth. Robertson pitched a perfect ninth for his seventh save.

Jeter left after an 0-for-4 night dropped his batting average to .254. The Yankees captain, a month shy of his 40th birthday, came out when Robertson entered to face Wright.

Jeter was on the mound during the pitching change, and Yankees manager Joe Girardi told the longtime All-Star his plan.

‘Fallout Shelter Near Me' Google Search is Trending In New York — But Why? 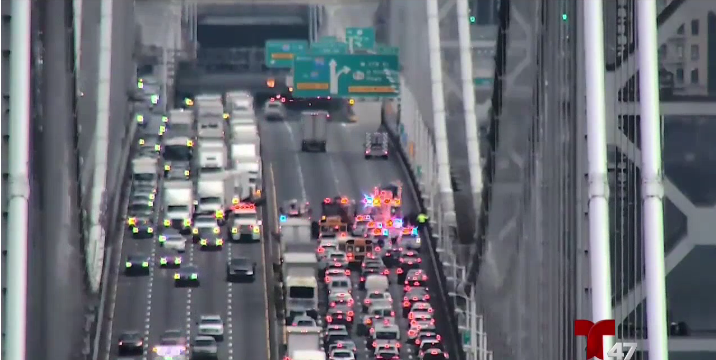 "I just told him I was going to make a double switch," Yankees manager Joe Girardi said. "He understands."

In addition to a commanding performance on the mound, the 25-year-old deGrom helped Mets pitchers end an unusual record for futility. He lined a single to center field in the third inning to end the staff's 0-for-64 start to the season.

The Mets had long passed a century-old record established by the St. Louis Browns. They went hitless in 45 at-bats in 1914, according to information provided by the Mets from the Elias Sports Bureau.

Young pitchers dominated the series in both games at spacious Citi Field after two slugfests in the Bronx. Masahiro Tanaka pitched his first major league shutout Wednesday, a 4-0 win for the Yankees.

After Rafael Montero started his big league career with a fine six-inning performance against Tanaka, deGrom distinguished himself.

It's been 12 years since a team had pitchers make their big league debuts in consecutive games. Milwaukee did in Sept. 2-3, 2002.

Adam Warren relieved Whitley to begin the eighth and added a strikeout before allowing a walk. Daniel Murphy then hit a grounder off the end of his bat down the third base line for a single to put runners on first and third.

Jeter was honored by the Mets before the game. He received several subway-themed gifts, including a "Cake Boss" creation and a No. 2 mosaic made of subway tiles. The Mets Foundation gave Jeter $22,222.22 donation to his Turn 2 Foundation.

Jeter drew a warm ovation when a video tribute was shown on the center-field scoreboard after the national anthem and rounds of applause before each at-bat.

But he did little at the plate. He lined into a double play in the third with runners on first and second. Then with two on in the eighth, he hit a grounder to shortstop Ruben Tejada, who threw home for a tag play at the plate to keep the score 1-0.

Up until then, the Yankees had little success against the shaggy-haired deGrom. The former college shortstop who was a ninth-round pick in 2010 was initially called up to pitch out of the bullpen, but got the start in place of Dillon Gee, who pulled a lat muscle.

The 24-year-old Whitley was not even on the Yankees' 40-man roster this winter, but with CC Sabathia, Michael Pineda and Ivan Nova all injured, he got the call after just 13 Triple-A starts over three seasons. The 15th-round pick of the 2010 draft.

David Robertson got David Wright to ground out to Jeter's replacement at shortstop, Brendan Ryan, with runners at the corners to end the eighth.

Jeter left after an 0-for-4 night. The Yankees captain came out when Robertson entered to face Wright. Robertson pitched a perfect ninth for his seventh save.