The list of issues at the facility is long and jaw-dropping — violence, trash piled up, human waste coating the floors, and at the top of the list: staffing

Lawmakers and city leaders say what is happening inside the walls of Rikers Island is a full-blown crisis, and that the governor needs to act in order to help get it under control.

The list of issues at the facility is long and jaw-dropping: violence, lack of food and water access, trash piled up, inmates locked in showers because of limited cell space, forcing them to stand in their own waste.

But at the top of the list of problem is staffing, with some correction officers calling out sick saying they're being overworked on 24-hour triple shifts. NBC New York has previously reported on those staff shortages. Officers have lodged complaints for months after being made to work triple shifts without a break, and with no access to food or water.

The problem has gotten so bad, that whole cell blocks are being left unstaffed at times. On Wednesday alone, 21% of the correction officers called out sick.

"The situation is urgent. It's life-threatening and it's unconscionable," said Bronx District Attorney Darcel Clark.

The gravity of the situation within the NYC jail facility — and how to fix it — were addressed in an all-day hearing. The drum beat to act grew louder this week after lawmakers and officials who toured Rikers earlier in the week spoke out about the conditions.

"I don't think anyone working or housed there feels or is safe," said NYC Public Advocate Jumaane Williams. "We are on the 50th anniversary of Attica, we are days away from something like that happening here." 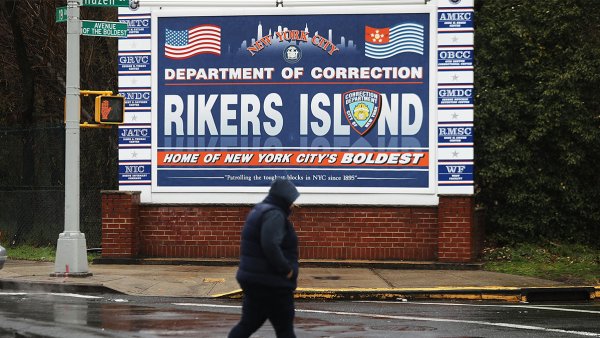 On Wednesday, protesters rallied outside City Hall, demanding the mayor shut Rikers down immediately. No one from the de Blasio administration denied the issues inside the jail, with the city's first deputy mayor saying that the "conditions are unacceptable."

Amid the escalating crisis — in which ten people housed there have died over the course of the summer — New York City Mayor Bill de Blasio announced an emergency response to the facility, which includes sending in police.

"We're going to be bringing in additional help from a crucial sister agency, the NYPD, to help with certain discrete functions that will take pressure off the Department of Corrections," de Blasio said Tuesday.

City hall says a solution for the facility is within reach by expediting not only state transfers of inmates who could be housed elsewhere, but also court cases for those simply accused who are awaiting trials and can't afford to post bail. The mayor's office also suggested supervised release for those at Rikers on technical violations, like being late for a parole hearing.

"There are hundreds of inmates who can be moved to state prisons appropriately who are supposed to go there," the mayor said Wednesday.

But the mayor's plans drew immediate criticism from local lawmakers who visited the jail the day before.

"Adding further police to that environment is going to make it much more hostile. That is not the solution," said New York State Assemblywoman Jessica Gonzalez-Rojas, who represents Queens.

Others said the proposals will take too long. There is a growing number of calls for Gov. Kathy Hochul to act. If she signs the Less is More Act, it would allow certain inmates to get out for specific reasons. Lawmakers said it's a shift that would help dramatically.

The plan to include police officer merited an angry response from the correction officers union on Tuesday, as they called on the mayor to resign, and the union president had strong words for de Blasio a day later.

"This has turned into like, modern day slavery. You are forcing me to work 25-30 hours a day with no break," said Benny Boscio. "And when it comes to paying me for my work, I'm not being paid. So, you tell me why officers aren't coming to work."

Their fury was stoked by accusations from city leaders — including the correction commissioner — that officers are faking their illnesses.

"We encourage people to come to work, we have to discipline them when they fake," said NYC Correction Commissioner Vincent Schiraldi. That discipline includes 30 days without pay if officers can't prove they're sick.

"Anyone who is faking sickness is hurting their fellow officer and it needs to stop. We are very aggressive about that," de Blasio said.

Correction officers on Rikers Island say they're on the verge of mental breakdowns - and now politicians are responding. Sarah Wallace reports.

Just last week, a 24-year-old man has become one of the most recent inmates to die at the correctional facility this year. Authorities are investigating the death of Esias Johnson who was found unresponsive in his cell at the Anna M. Kross Center on Sept. 7 and pronounced dead at 9:45 a.m., the city's Department of Correction said.

The family of Layleen Polanco is settling with the city over her death at a Rikers Island jail cell.