The 22-year-old hostess asked the group to show proof of getting the COVID vaccine in order to dine inside, part of NYC's executive order that went into effect this week

New York City restaurant workers and businesses owners were worried about what it would mean for them when they had to start enforcing the COVID-19 vaccine mandate that went into effect on Monday.

Before the end of the week, one of their biggest fears came true.

A hostess at Carmine's, the well-known restaurant in the city's Upper West Side, was attacked Thursday for doing her job: asking to see proof of vaccination from a group of diners from Texas, where the governor last month banned government mandates on COVID-19 vaccines.

Law enforcement sources said that the 22-year-old hostess repeatedly punched in the face and body, and three people in the attack are facing charges.

Exclusive cellphone video obtained by NBC New York shows a group of people in a scuffle outside the famed Italian restaurant around 5 p.m. At one point, the hostess stand is nearly tipped over and a waiter was seen carrying someone away from the scene.

In a statement, a spokesperson for Carmine's said in part that "it's a shocking and tragic situation when one of our valued employees is assaulted for doing their job — as required by city policies — and trying to make a living."

On Friday, there was security posted at the hostess stand, checking vaccination cards for those who wished to dine inside. Carmine's CEO Jeffrey Bank said that "I don't expect to have another incident, but of course to keep everyone calm and feel comfortable, we'll have to pay for someone to stand at the hostess stand all day for them to feel a little bit more comfortable."

One customer who was celebrating his birthday at a restaurant said he's disappointed by the behavior he witnessed. "We're trying to get together. We're trying to open the city back up. The only way to do that is with vaccinations. I think it's a good idea they're making it a mandate to get in with the vaccine card, but if that's the reaction, maybe we need to think of something else," he said. 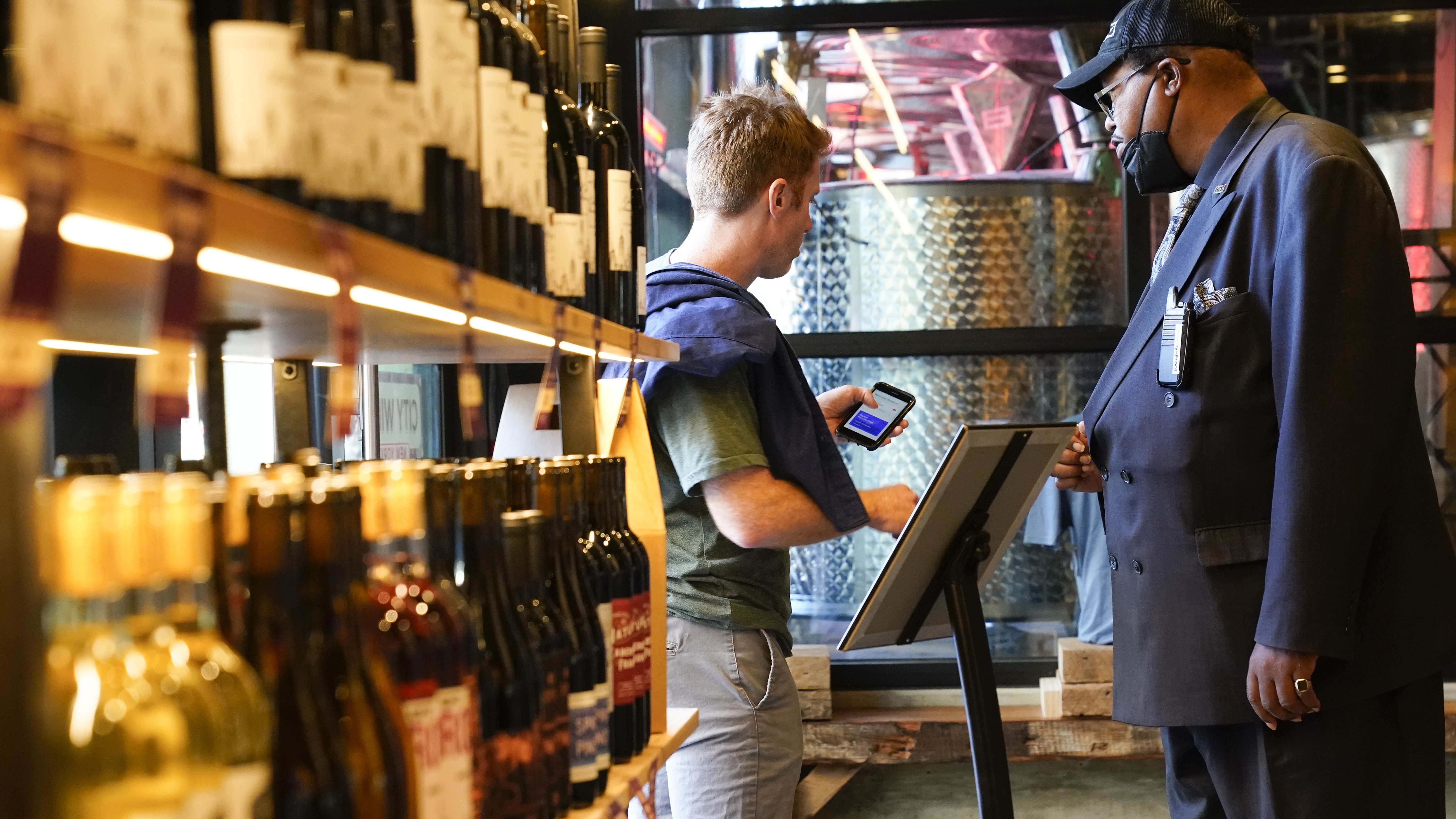 The Hospitality Alliance is calling on the city and the state to increase penalties for assaulting restaurant workers who are trying to enforce the new COVID rules. Bank echoed those calls, saying on Friday that he's "not against the mandate, I just want there to be higher fines and penalties for people who are morons."

Local leaders are also saying there needs to be steep consequences for those who violate indoor vaccine mandates.

"You can do [fines of] 500, 1000 [dollars]. Something like that would give people second thoughts about doing something so horrific," Manhattan Borough President Gale Brewer said.

The assault came on the same day as Mayor Bill de Blasio launched mobile vaccine units outside restaurants across the city for "Restaurant Vaccination Day of Action," another effort to boost vaccination rate amid rising cases of the highly transmissible delta variant that now accounts for 99% of tested cases in the city.

New York is now averaging around 5,200 new cases of COVID-19 per day, up from a low of around 300 per day in late June. In the city alone, an average of 1,797 cases per day was reported, according to the New York Times data.

U.S. government advisers will debate Friday if there’s enough proof that a booster dose of Pfizer’s COVID-19 vaccine is safe and effective.

De Blasio's vaccine mandate at restaurants, gyms and other indoor venues was the most aggressive step yet to increase the number of people protected from the coronavirus, but like the state's vaccine mandate for medical workers, it's facing challenges in court.

Unlike the state's mandate, which has been blocked by a federal judge who gave a group of workers time to argue that it is illegal because it lacks the opt-out, the city's mandate continues for the time being.

Gov. Kathy Hochul, a Democrat, vowed to fight the lawsuit and said getting vaccinated is the “most beautiful way” for individuals in healing professions to demonstrate their passion and concern for others.

"You are not going to find a safer place to eat in the country right now than in a restaurant in Manhattan, so I am not against the mandate, I just think that there should be higher levels of fines or punishment for people who are morons," Bank said.

Both Bank and the Manhattan Borough President said that the mayor needs to make it abundantly clear -- especially to tourists -- that it is a requirement to show your proof of vaccination if you want to dine inside a restaurant.

De Blasio has yet to comment on Thursday's attack at the restaurant.