This latest development comes on the heels of additional arrests in the tri-state area of alleged participants of the U.S. Capitol riot

Jeffrey Sabol turned himself in to FBI in Rye, New York, NBC 4 New York has learned. He is charged with obstruction of a law enforcement officer or federal function.

According to the federal prosecutor, Sabol was seen on video allegedly pulling an officer down the stairs, while allowing another man to hit the officer with a flag. Additionally, he may have assaulted another officer in an attempt to get their baton.

Sabol allegedly tried to flee the country to Switzerland, according to the federal prosecutor. He also allegedly attempted suicide following the Jan. 6 event, which the federal government notes is a sign of possible guilt. Sabol, a geophysicist who worked diffusing ordinances for military, was hospitalized, before being admitted into a psychiatric center.

Due to Sabol allegedly being a flight risk and danger, a judge ordered him held.

Attorney information for Sabol was not immediately known.

Additionally, five more New Jersey residents are charged in connection with the breach of the U.S. Capitol earlier in January. 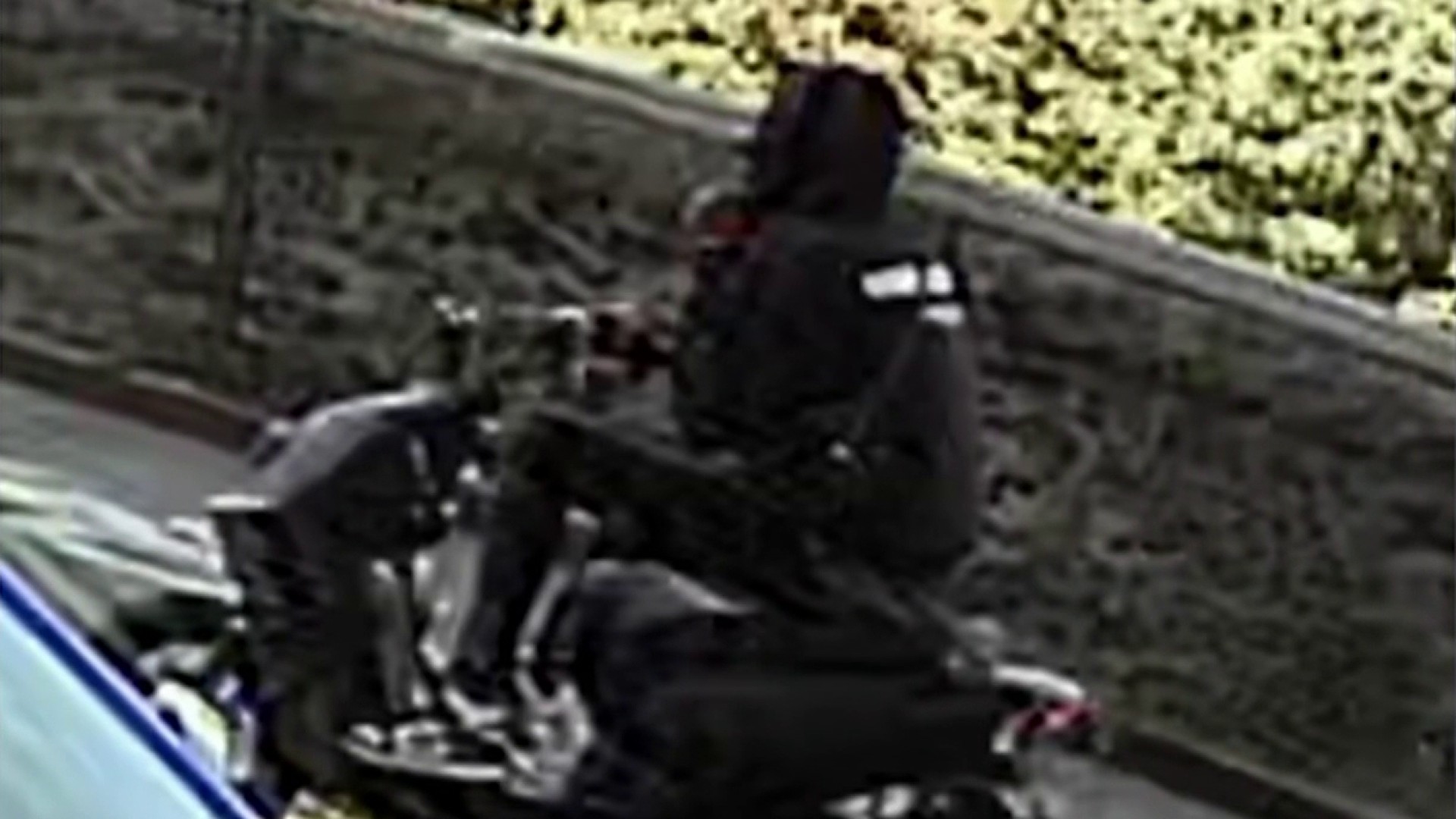 Marissa Suarez and Patricia Todisco had initial court appearances Friday afternoon and each posted $10,000 bail. Suarez worked as probationary corrections officer since 2019 in Monmouth County, but resigned upon her arrest, according to the U.S. Attorney's Office for the District of New Jersey.

“A violation of federal or state law of any kind is unacceptable, particularly from a sworn member of law enforcement whose role is to protect and serve,” Golden wrote in an email. “Actions have consequences and that applies to those who participated in the peaceful protests that resulted in violence at the Capitol.”

Each of the woman posted $10,000 bail. Stephanie Hazelton of Medford and Scott Fairlamb of Sussex also were scheduled for initial court appearances Friday, according to the U.S. attorney’s office.

Hazelton was one of the people who organized a protest outside a gym in Bellmawr last May after Democratic Gov. Phil Murphy issued an executive order closing all gyms because of the coronavirus pandemic, according to published reports.

Among the charges against Fairlamb are assaulting a law enforcement officer and carrying a dangerous weapon. One video reviewed by authorities allegedly showed Fairlamb picking the collapsible baton off the ground outside the Capitol, and another allegedly showed him shoving and punching an officer, according to the criminal complaint.

A friend of Fairlamb’s identified him and told authorities he lives in Butler, in Morris County, according to the complaint. The FBI also compared still photos and videos of Fairlamb at the Capitol with his driver’s license photo, which lists an address in Stockholm, in Sussex County.

The crime of carrying a dangerous weapon while illegally entering a restricted building to disrupt government business is punishable by up to 10 years in prison, according to the complaint. A message was left Friday night at a number listed for a gym Fairlamb operates in Pompton Lakes.

Earlier this week, authorities charged Rasha Abual-Ragheb, who allegedly took pictures of herself inside the Capitol on Jan. 6.

Court records didn’t list an attorney for Abual-Ragheb, who was arrested on Tuesday, and messages were left Friday with attorneys representing Suarez and Todisco. Information about attorneys for Hazelton and Fairlamb wasn’t immediately available.

This latest development comes after two other men in New York and another in New Jersey were also arrested by the FBI related to the events at the Capitol Building.

Christopher M. Kelly was arrested on federal charges at 5 p.m. Wednesday at his residence in New City, New York, law enforcement sources said. The court papers allege that Kelly traveled to Washington, D.C. with his brother, a retired NYPD officer and a group of Proud Boys.

According to court papers, a confidential source provided law enforcement with screenshots of Facebook messages allegedly related to the events of Jan. 6 and photos of Kelly apparently inside the Capitol building.

Due to these messages and photos, a search warrant was issued for Kelly's Facebook account. According to the criminal complaint, a review of IP log history from his Facebook account showed IP addresses which document locations consistent with travel from New City, New York to Silver Spring, Maryland on Jan. 6, and back to the New York area in the days after.

One of the photographs Kelly allegedly sent in a Facebook message apparently is that of rioters inside the U.S. Capitol (photo seen above) with the message "Inside Capitol." In additional messages shared on a group chat with several participants, according to the complaint, Kelly allegedly wrote on Jan. 6 shortly after 2:20 p.m.: “We’re in!” and posted the same photo of inside the Capitol building. A chat participant then asked, “You're there, Chris Kelly? What's really going on?” to which Kelly allegedly responded, “MAGA is here full on. Capitol building is breached." He followed that message with “Tear gas, police, stopped the hearing, they are all headed to the basement,” and, “F--- these snakes. Out of OUR HOUSE!”

Allegedly, in yet another online conversation on Jan. 6, according to the criminal complaint, Kelly is asked “Are you inside?!” and,” Want me to share? I won’t tag you unless you want me to” in reference to the above photo. Kelly responded, “Sure spread the word, Taking this back by force now, no more bs.”

On the day of the siege and days after, Kelly allegedly flaunted being in Washington, D.C. during the time of the riot and sent a photograph multiple times to multiple people in which he is seen with an American flag with the U.S. Capitol building in the background. Other photos showed him bare-chested in the moments before breaking into the Capitol, the FBI said.

According to the criminal complaint, Kelly is facing charges of obstruction of a
congressional proceeding, unlawful entry, and violent entry or disorderly conduct.

Kelly appeared via teleconference in federal court in White Plains Thursday afternoon. He was released on his own recognizance with travel restrictions imposed by the judge. His attorney information was not immediately known.

Also charged on Thursday was 32-year-old Patrick Stedman, from southern New Jersey, near Camden. A self-described dating and relationship strategist, Stedman allegedly posted calls on Twitter for others to join him on Jan. 6 because he was "assembling a team."

According to a criminal complaint, the Haddonfield resident who lives with his parents posted videos of himself traveling to Washington, D.C. and taking part in the breach of the Capitol on Jan. 6. Prosecutors said Stedman boasted online of reaching House Speaker Nancy Pelosi's office with others, and that he went on to write about "shots fired, guns drawn by guards."

“I was pretty much in the first wave, and we broke down the doors and climbed up the back part of the Capitol building and got all the way into the chambers,” he posted, according to a criminal affidavit.

The FBI was alerted to Stedman by a former high school classmate and a former college classmate, according to the affidavit.

Stedman’s Twitter bio contains a link to a website that promises “daily emails on sex and female psychology.” In a tweet Wednesday, Stedman wrote he would be “taking this opportunity to unplug for a few days and focus on writing, lifting, and meditation.”

Stedman was scheduled to make an initial court appearance Thursday afternoon in federal court in Camden. It wasn’t immediately known if he had retained an attorney.

Later on Thursday, the FBI announced they had arrested an employee of the New York City Department of Sanitation who allegedly entered the Capitol and walked around inside during the riot. Dominick Madden was initially seen in photographs and on video sporting QAnon gear while shouting the group's slogan and waving a Trump flag outside the Capitol building.

The 43-year-old Brooklyn resident was later captured on security footage entering the Capitol just before 3 p.m. According to court papers, Madden was seen walking around inside the building and speaking with other rioters.

Sanitation Department investigators initially interviewed him on Jan. 15, when he told them he was out on sick leave at the time of the protests but admitted to not being home at the time, with his license plate being captured on the Delaware Memorial Bridge the day before and after the riots, court papers showed.

Madden was also found to have an account on Telegram, an encrypted app that recently has become a haven for conspiracy theorists. He is pictured wearing similar QAnon apparel on the app.

Madden is currently suspended by the Sanitation Department. An FBI spokesperson confirmed he was in custody Thursday evening.

Madden was subsequently released Friday on a $250,000 bond and ordered not to engage in any political activity, not to travel to the U.S. Capitol or and any state capitol, and his travel was restricted to New York City, Long Island and New Jersey.  Madden’s next court appearance is scheduled for Jan. 29 in federal court in Washington, D.C.

More than two weeks after the siege, the FBI continues to make arrests throughout the country. Montana man Henry Muntzer was charged Thursday, as was Eric Munchel, of Tennessee. The FBI said Munchel had a cache of weapons at home and brought zipties with him to "get me some of them."

As of Thursday afternoon, there were 117 people facing federal charges for the riot at the Capitol. Of those defendants, 13 have known ties to extremists, four are military veterans and another four are first responders.