Breakthrough COVID Infections: What Are They and Who Is More Likely to Report Them?

"If you've been infected in the past with an old or a classic strain of COVID you may not be as well protected against these newer strains but we've seen from the early data from Pfizer and Moderna that these do provide added protection. So there is added value to getting vaccinated," NYC's Dr. Jay Varma says

Can you get coronavirus once you've been vaccinated? And can you still spread it even after you've had your shots? How worried should you be?

These are three of the increasingly common questions as the vaccination rollout accelerates up at the national, state and local levels. None of the COVID vaccines are 100 percent effective against the virus, which means there will be a number of so-called "breakthrough infections" -- those that defy expected vaccine outcomes.

Health experts and scientists acknowledge that fact. What they aren't sure of, though, is the incidence of these breakthrough infections. The CDC and local governments, including top health officials in New York City, have intensified their study of these cases as they seek to more quickly turn the page on the pandemic.

To date, about 5,800 breakthrough cases have been reported to the CDC, less than 0.08 percent of the more than 76 million people in the U.S. who are fully vaccinated, the agency says. Vaccine breakthrough infections were reported among all people of all ages eligible for vaccination. But who might be the more likely cases?

As more Americans get fully vaccinated against the coronavirus, the number of breakthrough infections is expected to rise, too. Here’s what you need to know about this medical phenomenon.

Overall, no unexpected patterns have been identified in case demographics or vaccine characteristics, the CDC says. It has developed a national COVID-19 vaccine breakthrough database where state health department investigators can currently enter, store, and manage data for cases in their jurisdiction.

The agency also said it plans to start reporting breakthrough infection data regularly next week, according to NBC News.

In the meantime, it seeks to remind people that vaccine breakthrough infections are seen only in a very small percentage of those who are fully inoculated -- and it recommends all eligible people get their vaccinations as soon as possible.

"All of the available vaccines have been proven effective at preventing severe illness, hospitalizations, and deaths. However, like is seen with other vaccines, we expect thousands of vaccine breakthrough cases will occur even though the vaccine is working as expected," the CDC said. "CDC also continues to recommend people who have been fully vaccinated should keep taking precautions in public places, like wearing a mask, staying at least 6 feet apart from others, avoiding crowds and poorly ventilated spaces, and washing their hands often."

Some of the breakthrough infections are thought to stem from certain strains of the virus that may be more resistant to vaccines, experts say. They also say some highly contagious variants may pose a greater risk of reinfection from other variants, but much of the research around that has been lab-based and lacks real-world context.

In New York City, health officials are trying to extrapolate more real-world data as it relates to its most dominant variants, including the B.1.526 strain that is thought to have originated in Washington Heights last year before spreading to other boroughs and states. Right now, the city is still investigating whether that variant poses a higher risk of reinfection from other variants or causes more severe outcomes, according to a detailed report from health officials earlier this week.

Reinfection remains highly rare, though New York City hasn't publicly reported data on any potential cases of that it may be investigating locally.

At this point, officials do say they believe it to be more infectious than earlier strains; it doesn't appear to be more vaccine-resistant, but that element requires further study, health officials say. The U.K. variant (B.1.1.7), which is described as a variant of concern, is now the predominant strain in the U.S. and accounted for about 30 percent of New York City specimens tested during the latest study period.

That strain has proven to cause more severe outcomes in terms of hospitalizations and deaths, experts say, while the Brazilian variant (P.1) has shown evidence it may be more resistant to vaccines. In total, eight known COVID variants and others of uncertain lineage now account for more than 70 percent of positive samples in New York City, up from about 10 percent in January, the latest report finds. 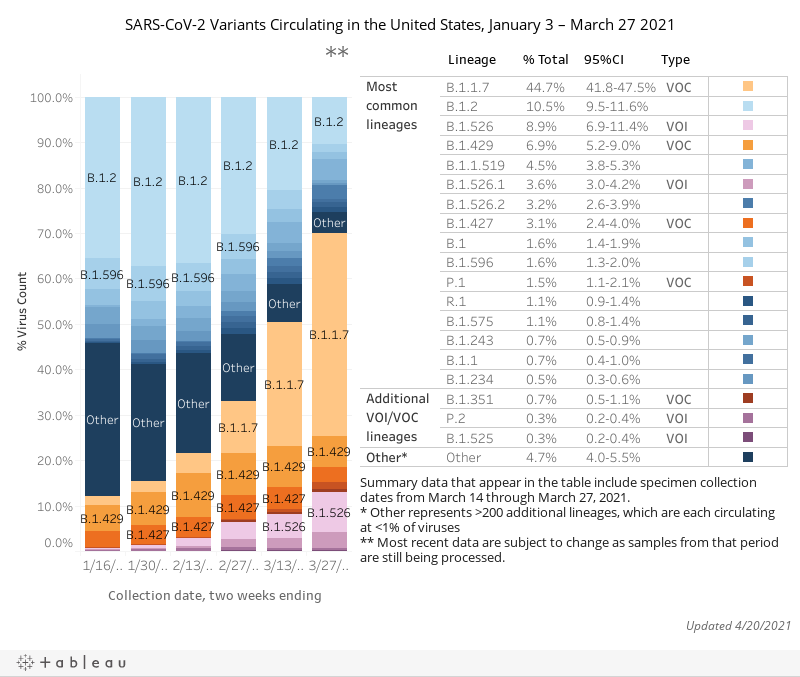 Overall, health officials admit the presence of variants is likely highly underreported. The CDC, along with individual states and cities, only conducts the exhaustive genetic sequencing to detect variants in about 5 percent of samples, which is up from 2 percent a number of months ago. It's still a fraction of all positive cases.

Ultimately, officials still believe existing vaccines protect against the variants that have emerged and those that will emerge over time. The hope, they say, is that vaccinations will continue to increase at a faster rate than variants' prevalence.

"The reason that we really want people to get vaccinated even if they had an infection in the past is that we know from the studies that are being done right now vaccine provides you additional protection -- it boosts your immune response -- and it provides additional protection against new variants," Dr. Jay Varma, the mayor's senior public health adviser said Thursday. "If you've been infected in the past with an old or a classic strain of COVID you may not be as well protected against these newer strains but we've seen from the early data from Pfizer and Moderna that these do provide added protection. So there is added value to getting vaccinated."

To date, New York, New Jersey and Connecticut have all vaccinated slightly more than a quarter of their respective populations.

President Joe Biden has set a Monday deadline for U.S. states to make all residents age 16 and older eligible for vaccination.