After 51 Days on Ventilator, Pa. Dad Leaves Hospital – and He Can Talk Again

For a time, relatives weren't sure John Della Guardia was going to make it. On Tuesday, he was wheeled out of Riddle Hospital

A Delaware County father was released to a rehab facility this week after spending 51 days on a ventilator due to the coronavirus.

Both John and his wife Colette were hospitalized at Riddle with the virus in late March. That was about a week after returning from a Norwegian cruise to the Bahamas with dozens of neighbors from their over-55 community, two of their daughters told NBC10. 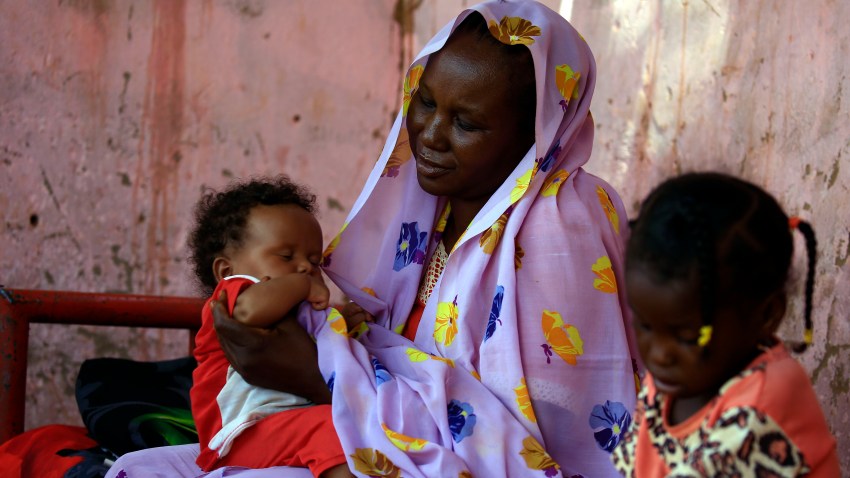 Extreme Poverty Rises; a Generation Sees a Future Slip Away

Even during the trip -- from New York to the tropical nation via Cape Canaveral -- Norwegian began shutting down certain parts of the ship like the buffet. A jaunt to an island owned by the cruise line was canceled.

By the time the Della Guardias returned, Pennsylvania was shutting down, too. John began showing symptoms right away and was hospitalized on the 24th with symptoms of the virus. The family had received a letter from the cruise line saying a passenger who previously traveled on the same ship had tested positive for the virus.

Eventually John and Colette were admitted to the ICU, two rooms apart. Daughter Terri LaPerle sent daily updates to their large Catholic family, chronicling doctor’s attempts to improve their father’s health -- putting him on his stomach and giving him oxygen before eventually moving him to a ventilator operating at 100%. Colette was on oxygen and spent very limited time out of bed.

On April 2, John wasn’t doing well. Staff were going to try one last thing they could do, laying him prone -- though it hadn’t worked the last time. Family were prepared to say goodbye - forever.

Nurses, well aware of the married couple cohabiting in their ICU, arranged for four of their children to visit John, two at a time, clad in protective gear.

"The nurse turned her bed and turned daddy’s bed so mom could see him through the glass doors. Then I gave mom my phone and we had a phone in our room," Terri wrote in one of her updates to relatives.

"The staff has been so incredible to our family," LaPerle said in an interview. In kind, the family had donated meals and gift bags to the staff a few times during John’s nearly two-month stay.

LaPerle remembered difficult conversations around that time, like: could her dad receive his last rites? Could they get a priest into the hospital?

She lost her grandfather 20 years ago and believes her grandmother joined him in the afterlife last year when she passed at 96 years old.

But when it came to her dad: "I wasn’t ready to let god go through with his plan, if his plan was dad wasn’t going to make it," LaPerle said.

Flash forward to Tuesday - after 56 days in the hospital - or more than 50 pages of health updates to loved ones.

John was wheeled past rows of cheering staff and family. Eight of his nine grandchildren were present and holding signs (the remaining one couldn’t make it from Florida).

Beyond the family, relatives have been hearing from friends of friends or neighbors in the over-55 community, Creekside Village in Boothwyn.

"He definitely has a lot of people out there that are caring for him and supporting him and have been praying for him this whole time," daughter Julia Flynn said. "It’s been so humbling the amount of people that have come together."

Colette is out of the hospital too, at home but still on oxygen, her daughters said.

As John was loaded into an ambulance bound for Kindred Hospital in Havertown, where he’ll work on getting his strength back, he pointed out and called out the names of his grandchildren as best he could.

Talking has been difficult since coming off the ventilator and dealing with his trach bag -- for awhile family would have read his lips to "hear" him wanting to get back to the shore house in Margate or back to work on the Creekside Village newsletter.

But on Wednesday, relatives got even more promising news: while undergoing rehab at Kindred, John Della Guardia spoke out loud.

John Della Guardia was hospitalized with the coronavirus after returning from a cruise to the Bahamas. He was released to a rehab facility after 51 days on a ventilator at Riddle Hospital in Media.

NBC10 is collecting the stories of COVID-19 survivors. If you have a survival story you want told, reach out to Digital Content Producer Joe Brandt at Joe.Brandt@nbcuni.com.