Although weather has stayed favorable for much of Saturday, an incoming cold front could still cause some trouble, Storm Team 4 says

Days after devastating Louisiana and parts of the south as the strongest hurricane to hit the U.S. so far this year, the remnants of Laura mainly slipped south of the tri-state Saturday.

What's left may not deliver the expected sting but Storm Team 4 says the cold front that pushed the former hurricane into our area could still bring storms to parts of the tri-state.

Storm Team 4's Matt Brickman says the front moving in from Philadelphia through the nighttime hours could bring isolated severe storms and strong wind gusts. Parts of New Jersey could see some storm activity in the evening hours whereas New York City might see the action later, around 9 p.m.

A severe thunderstorm warning was issued for Warren and Hunterdon counties in New Jersey through 8:15 p.m and for New York's Sullivan County until 8:45 p.m, as well as for Dutchess and Ulster counties until 9:15 p.m.

The severe weather threat projected for Saturday afternoon had much of the tri-state area, extending across part of Long Island and up into New York as far as the Poughkeepsie area, bracing for impact.

On Long Island, crews in places like Hempstead were getting their equipment ready Friday night to face potential damage and power outages. Some customers feared that utilities like PSEG Long Island, which took up to a week to fully restore power after Tropical Storm Isaias, aren't able to handle another large storm. The president of the utility said Friday that they have brought in 700 crew members from out of state, and that problems with their communication system have been corrected. 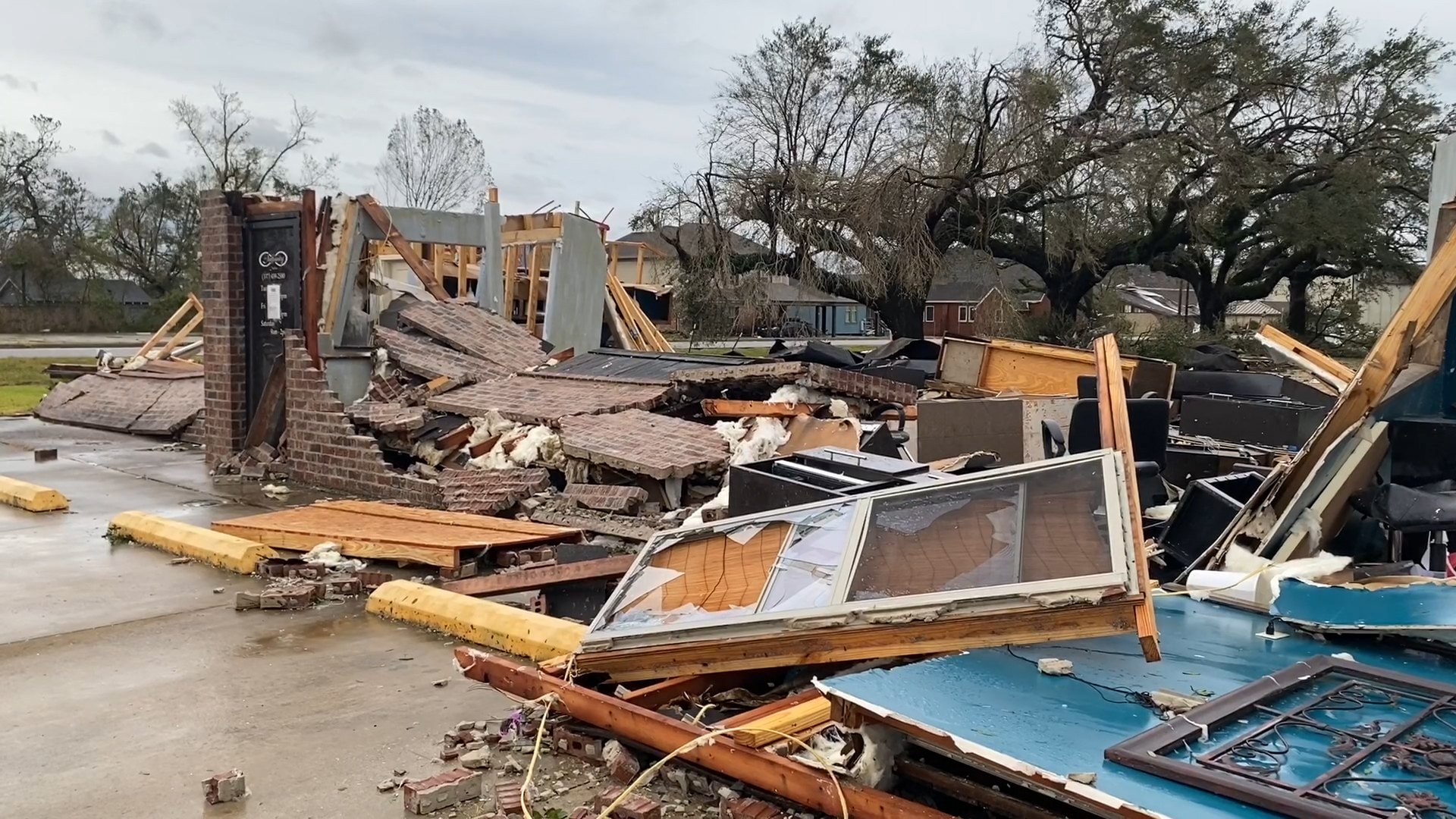 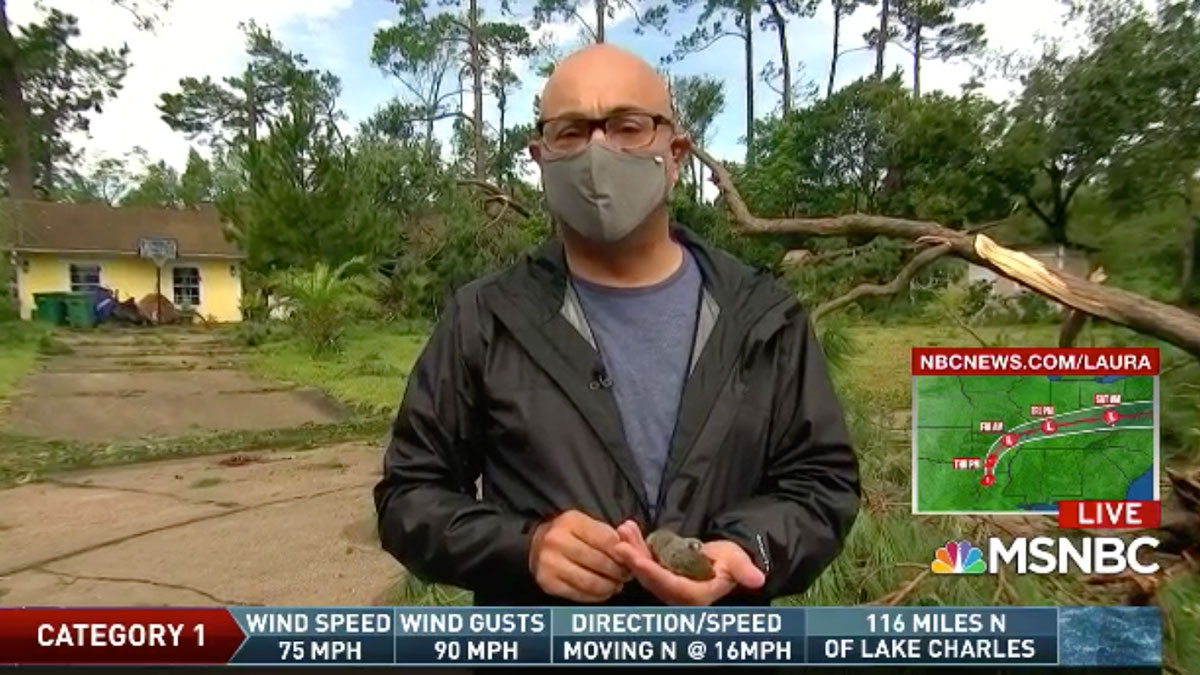 Once the last of Saturday night's storms move offshore, conditions will quickly improve overnight leading into Sunday, ending the weekend with plenty of sunshine, low humidity and comfortable temperatures peaking around 80 degrees in NYC. The next few days will bring more of the same, though with cloudier skies.

Any reprieve would be welcome for a tri-state area that saw two bouts of severe weather in three days -- and could make it three bouts in five days in spots if the severe potential of storms associated with Laura play out.

In Montgomery, a tornado touched down and caused serious damage, Marc Santia reports.

Thursday's storms brought wild winds, torrential rain and tornado warnings to parts of New York and Connecticut starting in the mid-afternoon hours. Thunder boomed and lightning flashed in New York City late at night after powerful winds ripped trees from their roots in the Lower Hudson Valley earlier in the day.

Reports of damage from the storms were widespread by the evening, with trees, electrical poles and wires down in Dutchess, Orange, Suffolk, Sullivan, Ulster and Westchester counties, as well as Fairfield County. Nickel- to quarter-sized hail fell for several minutes in parts of Westchester County and the surrounding areas.

One person was left stuck inside their car in Westport, Connecticut, after downed wires and tree limbs fell on top of the vehicle. Firefighters and utility crews worked to get them out safely. A few towns away in Ridgefield, there were reports a tree had fallen on a house. The National Weather Service will survey storm damage in New Haven Friday to determine if a tornado was responsible. The same day, Connecticut Gov. Ned Lamont declared a state of emergency in response to the damage the storm brought to parts of his state.

Meanwhile, the National Weather Service did confirm Friday that a EF-1 tornado touched down in Orange County's Montgomery around 6:15 p.m. Thursday. They estimated top wind speeds around 90 mph, and believe those intense conditions lasted for about five minutes, with its path was just over two and a half miles. While the tornado was the likely cause of some minor damage to two buildings at a nearby airport, the bulk of the damage consisted of large snapped and uprooted trees, the NWS said.

Darrin Hinman grabbed his phone to record the extreme weather, after realizing it was no ordinary storm cloud.

"Suddenly I realized what I was seeing because I've never seen a tornado live before," said Hinman. "Right after I took that video the wind came, everything go crazy and we headed to the basement. It got pretty scary."

Patio furniture, grills and anything left outside during the storms was thrown about in the strong winds that descended upon the town, with the gusts and rain swirling so intensely at one point that one resident said he couldn't see his car in the driveway from inside his house.

Tens of thousands were without power across the tri-state as a result of Thursday's storms, with Connecticut being hit especially hard. It comes after some had power knocked out during Tuesday's storms, and just a few weeks after Tropical Storm Isaias knocked out power to many more, some for over a week.