Obama on Hillary: “I'm Going to Miss Her”

President Barack Obama sat for an interview with his former political rival, outgoing Secretary of State Hillary Clinton, so he could "publicly say thank you" for the work Clinton has done over the last four years.

In the "60 Minutes" interview that aired Sunday, Obama and Clinton chuckled as they described their partnership and stoked speculation that Obama may prefer Clinton to succeed him in the White House after the 2016 elections. Clinton is leaving Obama's Cabinet soon, and speculation about the former first lady and senator has only grown more intense after a heated appearance last week on Capitol Hill. 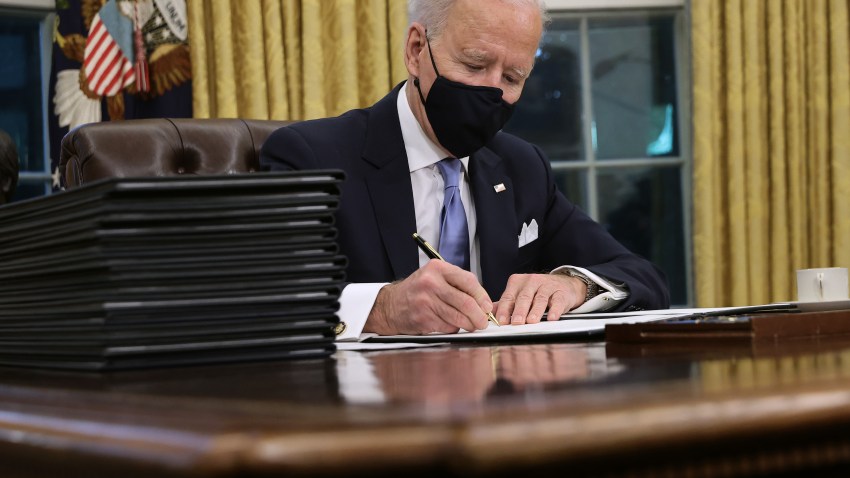 Biden Puts Forth Virus Strategy, Requires Mask Use to Travel

Both Obama and Clinton batted away questions about future campaigns, but the joint interview — the president's first with anyone other than first lady Michelle Obama — was only likely to increase the fascination with Clinton's future.

Obama, who suggested the joint interview as Clinton prepared her exit from the State Department, lavished praise on his rival for the 2008 Democratic presidential nomination. He called her a friend and an extraordinary talent, and praised "her discipline, her stamina, her thoughtfulness, her ability to project."

It teetered on an endorsement of a 2016 presidential bid that is still an open question. Clinton advisers say she has not made a decision about a run, while Democratic officials suggest Clinton would be an early favorite if she decided to mount another campaign.

Obama and Clinton laughed when asked about the political future.

"You guys in the press are incorrigible," Obama said when pressed on another Clinton presidency. "I was literally inaugurated four days ago. And you're talking about elections four years from now."

The possibility of a presidential campaign for Vice President Joe Biden did not come up during the interview, taped Friday at the White House.

Obama described why he insisted Clinton become his secretary of state.

"She also was already a world figure," Obama said. "To have somebody who could serve as that effective ambassador in her own right without having to earn her stripes, so to speak, on the international stage, I thought, would be hugely important."

It was a job she initially refused. But Obama kept pushing, Clinton said.

"The one thing he did mention was he basically said: 'You know, we've got this major economic crisis that may push us into a depression. I'm not going to be able to do a lot to satisfy the built-up expectations for our role around the world. So you're going to have to get out there and, you know, really represent us while I deal with, you know, the economic catastrophe I inherited."

It's a job she embraced during the last four years. She arrived on the job with a global brand she quickly lent to promoting U.S. interests. In return, the public rewarded her with high approval ratings that could come in handy if she runs in 2016.

But her tenure has had its blemishes. For example, the United States did not directly intervene in the civil war in Syria, where the United Nations says more than 60,000 people have been killed and more than 2 million people have been internally displaced since the start of the conflict in March 2011.

"There are transitions and transformations taking place all around the world. We are not going to be able to control every aspect of every transition and transformation," Obama said, saying his jobs are to protect the United States and engage where the U.S. can make a difference.

In a separate interview with The New Republic, also released Sunday, Obama said, "As I wrestle with those decisions, I am more mindful probably than most of not only our incredible strengths and capabilities, but also our limitations."

On "60 Minutes," he praised Clinton's State Department for helping him sort out what the United States can — and cannot — accomplish.

"It has been a great collaboration over the last four years. I'm going to miss her. Wish she was sticking around. But she has logged in so many miles, I can't begrudge her wanting to take it easy for a little bit," Obama said.

It's something of a turnaround from 2007 and 2008, as the two raced through Iowa and New Hampshire and onward. In increasingly bracing language, the two excoriated the other. At one point, a visibly angry Clinton seethed, "Shame on you, Barack Obama."

Obama now jokes about the rivalry.

"Made for tough debates, by the way, because we could never figure out what we were different on," the president said.

Both acknowledged disagreements continue but said they had common goals.

"Are there going to be differences? Yeah. Deep differences? Of course," Clinton said. "You had a lot of strong-willed, -minded people. But the president deserves our best judgment, our advice and then he deserves us to stand with him and to execute."