Annabella Sciorra: Harvey Weinstein Held Me Down, Raped Me

“Sopranos” actress Annabella Sciorra confronted Harvey Weinstein from the witness stand Thursday, testifying that the former Hollywood studio boss overpowered and raped her and made other crude overtures that included sending her X-rated chocolates and showing up uninvited in his underwear with a bottle of baby oil in one hand and a video in the other.

In a quivering voice, Sciorra told the jury that the burly Weinstein barged into her apartment in the mid-1990s, threw her on a bed and forced himself on her as she tried to fight him off by kicking and punching him.

She said that a month later, she ran into him and confronted him about what happened, and he replied: “That’s what all the nice Catholic girls say."

Then, she told the jury, Weinstein leaned toward her and added menacingly: “This remains between you and I.”

“His eyes went black and I thought he was going to hit me right there,” Sciorra testified.

The 59-year-old actress became the first of Weinstein's accusers to testify at his trial, where the movie mogul whose downfall gave rise to the #MeToo movement is charged with forcibly performing oral sex on former production assistant Mimi Haleyi in his New York apartment in 2006 and raping an aspiring actress in a hotel room in 2013.

The disgraced movie mogul's attorneys said the judge in the case should recuse himself after the magistrate admonished Weinstein for using his cell phone in the court room the day before. NBC New York’s Adam Kuperstein reports.

Weinstein's lawyers sought to sow doubts about Sciorra's story, raising questions about her actions after the alleged rape and asking whether she had once described the encounter as "awkward ex," which she denied.

Weinstein is not charged with attacking Sciorra, whose accusations date too far back to be prosecuted. Instead, she testified as one of four additional accusers prosecutors intend to put on the stand to show that the powerful Hollywood producer had a habit of preying on women.

Generally, prosecutors cannot bring up alleged crimes beyond the charges at a trial, but such evidence can be allowed if it shows a certain pattern of behavior. Five additional accusers were allowed to testify against Bill Cosby at the Pennsylvania trial that led to his 2018 conviction for sexually assaulting a woman.

Weinstein, 67, could get life in prison if convicted.

The executive behind such Oscar-winning movies as “Pulp Fiction” and “Shakespeare in Love" has insisted any sexual encounters were consensual.

Recounting an accusation she said she kept largely secret for decades, Sciorra testified that after raping her, Weinstein went on to try to perform oral sex on her, saying, “This is for you," as her body “shut down."

“It was just so disgusting,” she said. She said she started to shake: “I didn’t even know what was happening. It was like a seizure or something.”

At other points in the 1990s, she said, Weinstein sent her packages with Valium and a box of chocolate penises and turned up early one morning at her Cannes Film Festival hotel room in his underwear with the body oil and the videotape. She said he left after she started frantically pushing buttons on the room phone to summon help. 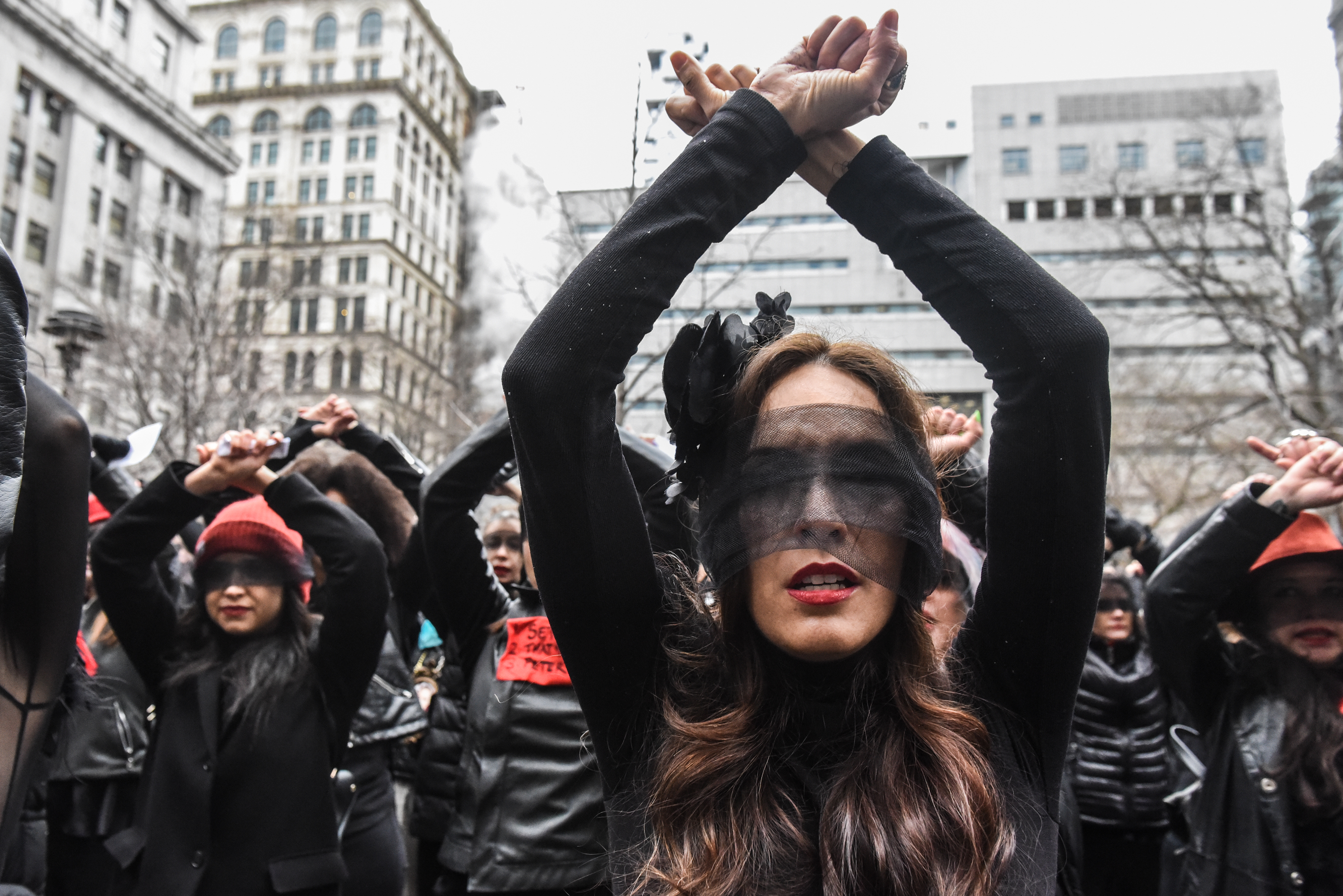 The jury of seven men and five women listened keenly and took notes on her testimony. Weinstein was mostly expressionless, sometimes appearing to purse his lips as he chewed mints.

During cross-examination, Weinstein lawyer Donna Rotunno noted that Sciorra never went to police or a doctor about the alleged rape.

“At the time, I didn’t understand that that was rape,” Sciorra said. She testified earlier that she once thought rape was a crime of strangers.

“I thought he was an OK guy. I felt confused. I felt like I wished I never opened the door,” she said.

Rotunno also suggested that Sciorra’s judgment and recollection were clouded by drinking — the actress replied that she remembered having only a glass of wine with dinner — and played a 1997 clip of Sciorra playfully telling late-night host David Letterman that she sometimes had fun with the media by making up stories such as her father raising iguanas for circuses.

Harvey Weinstein has been hit with new charges of sex crimes in California, the same day he appeared in court in New York City. Jonathan Dienst and Chris Glorioso report.

Sciorra said she would never lie about something as serious as sexual assault.

After court was dismissed for the day, Sciorra's lawyer Gloria Allred said the defense lawyers were grasping at straws in some of their lines of questioning, including the Letterman clip.

The defense also highlighted an August 2017 text message in which Sciorra told a friend she was broke and was “hoping Harvey has a job for me.”

The actress said she was just “fishing” to try to find out through the friend whether Weinstein was aware that a reporter had gotten wind of her accusations. They were first published in The New Yorker two months later.

Sciorra drew acclaim for her part in Spike Lee’s 1991 movie “Jungle Fever” and her role as a pregnant woman molested by her doctor in 1992's “The Hand That Rocks the Cradle” the next year. She later appeared on “The Sopranos."

She said she met Weinstein at an industry event in Los Angeles in 1990 or 1991. By 1993, she had starred in one of his company's movies, .the romantic comedy “The Night We Never Met.”

She said the rape happened in late 1993 or early 1994, after Weinstein dropped her off from a movie-business dinner and then appeared, uninvited, at her door a few minutes later.

Sciorra later acted in another Weinstein-produced picture, 1997's “Cop Land,” though she said she didn't realize when auditioning that his studio was involved.

She said she told no one at first about the alleged rape, not even her brothers.

“I wanted to pretend it never happened. ... I wanted to get back to my life,” she told the jury.

Scheduled to be on the witness stand Thursday is Barbara Ziv, the physiologist from the Bill Cosby trial, Allred said.