‘My Heart Is Destroyed': Driver in Deadly NJ School Bus Crash Sentenced to 10 Years in Prison

"I just want to say, I'm sorry, I have deep remorse," driver Hudy Muldrow, 79, said. "I loved those kids that I was driving."

The school bus driver who pleaded guilty in a crash that killed a fifth-grade student and teacher in New Jersey in 2018 was sentenced to 10 years in state prison.

Seventy-nine-year-old Hudy Muldrow pleaded guilty this past December to reckless vehicular homicide, assault by auto and child endangerment. Prosecutors agreed to recommend a 10-year sentence as part of an agreement that included dismissal of 20 additional charges of assault by auto in connection to the May 2018 crash on Interstate 80 in Mount Olive.

State Police say Muldrow was driving students on a field trip and tried to make an illegal U-turn on the highway. The bus was broadsided by a dump truck and broke apart. It was carrying 44 people. Dozens of children were injured and 10-year-old Miranda Vargas, a fifth-grade twin, and teacher Jennifer Williamson Kennedy, 51, were killed.

Vargas' mother, simply identified in court as L.V., was among the over a dozen family members, loved ones and students to deliver heart-rending victim impact statements. 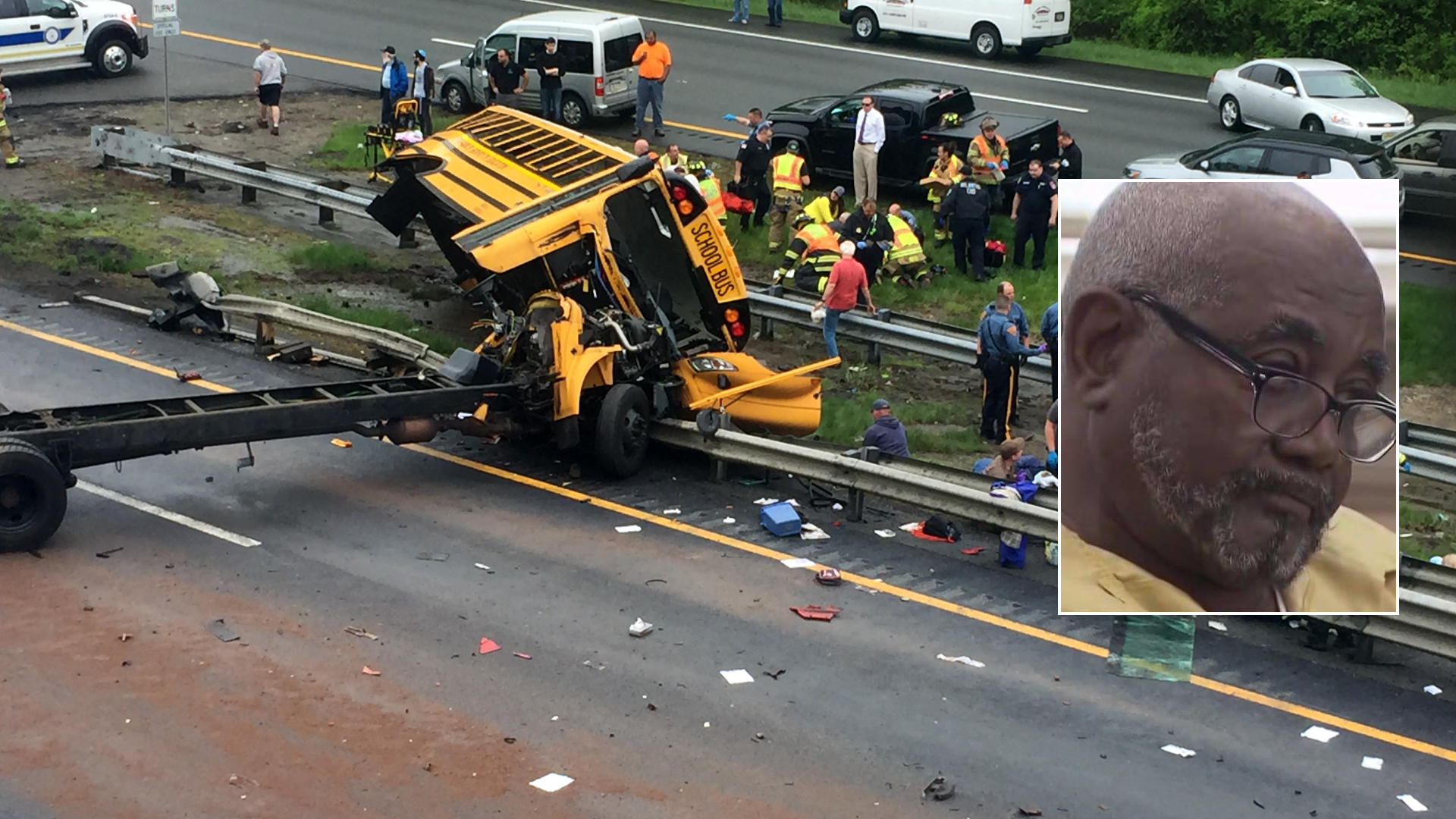 "My heart is destroyed because of one careless act of a man," she said through tears. "Madison, Miranda's twin, is no longer the Madison we knew. "She is lost and trying to find herself. I not only lost one daughter, but I also lost the daughter we once knew before our lives were forever changed."

Madison spoke next, telling Muldrow "I hope you rot in jail" during her impact statement.

Vargas' father said, "There will never be enough words to express the anger and pain to express what I feel."

Meanwhile, Varga's grandfather, Rev. Johnny Rivera, said he walks a tightrope between forgiving Muldrow, and wanting justice, saying he believes that Muldrow's actions were not intentional. Halfway through his impact statement he turned and addressed Muldrow.

"Mr. Muldrow, I forgive you. I have to. Deep down inside, I have to," he said. "Do I have to accept what you have done? Absolutely not. Forgiveness and acceptance are two different things."

Williamson's mother, Dolores Williamson, also spoke, telling Muldrow that "everything you can do was taken from my precious daughter."

"You took that all away. My heart is broken and my family is shattered and sad," she added.

Kevin Kennedy, Williamson's widower, read a poem in court in which he said his "heart is wounded" and called his wife "my life, my true best friend."

The family of Muldrow asked for mercy. First to take to the podium was the defendant's son, Sgt. 1st Class Ronnie Murphy.

“First and foremost, I would like to send my condolences,” he said, adding “this is a bad situation. In this situation everyone loses.”

Murphy went on to say that in most situations, one has the opportunity to fix a mistake. This was not one of them.

"Usually in a situation you get an opportunity to fix it, your Honor," Murphy said addressing the judge. "This situation cannot be fixed. Everything that my father has done throughout his life is gone. Nobody cares about what he’s done positive because of this being negative."

Muldrow's son went on to say the horrific case will forever be linked to his father, with many negating to see the positive things he has done throughout his life, including being there for him and being a community coach for decades. He also mentioned he had no previous criminal history.

"I’m speaking for [my father] and at this point all he can do is throw himself at the mercy of the court," Muldrow's son went on to say, as his father, sitting behind the defendant's table wiped tears from his eyes.

Addressing the family of the victims lost, Murphy said he "knows" what it feels like to lose someone, since he already lost his mother.

"My father is the only thing I have left," Murphy said with tear-filled eyes. "Today, I'm going to lose my father."

"I also understand that my father did nothing on purpose to harm nobody ever. I've never ever seen or heard him talk about harming anyone," his son stressed as tears streamed down his face.

"Have mercy on my father," Murphy said. "That is a good man."

Muldrow's great-nephew, Kevin Hawkins, also addressed the court on behalf of the entire family. He started off by reading a letter from Muldrow's church to paint a picture of his character. In the letter, the church's pastor called him "an invaluable member of the church and the community," adding that Muldrow was a member of the trustee board, drove its van and even performed maintenance work.

Multiple ambulances are said to be rushing to the scene.

"All of my life, my uncle has been honorable, respectable, understanding, compassionate, God-fearing man with a heart of gold," the letter read. "Never taking a drink, a smoke or using a drug."

Hawkins then went on to say that he knew his uncle was grieving since the unfortunate incident, adding that it was "human error" and was not done "with malicious intent."

He called him hardworking and modest. Muldrow's great-nephew went on to say that he is loved so much so that he calls him uncle.

Calling herself "a broken mother," L.V. said, with the twin's father and sister crying while standing alongside her: "That day I died as well. No parent should have to bury their child."

"I never got a chance to say goodbye," she said, adding that she hopes for justice and that Muldrow "suffers for all the pain he's caused us."

Muldrow has had his license suspended 14 times. Some were for administrative reasons such as failure to pay parking tickets, but Muldrow also had eight speeding violations between 1975 and 2001, according to state motor vehicle records.

After the victim impact statements, Muldrow said "he has deep remorse."

"I just want to say, I'm sorry, I have deep remorse," he said. "I loved those kids that I was driving."

"I know you are a good man and I am sorry that I have to impose this sentence," the judge said, adding that he does not enjoy sending anyone to state prison, "especially someone like you who lived good life."

"I'm sorry and I wish you well, Mr. Muldrow," the judge said.

The crash spurred legislative efforts to require buses to have three-point seat belts and to require quicker notification to school districts when their bus drivers commit moving violations.

Last year, Gov. Phil Murphy signed into law four new safety bills inspired by the crash. One requires school bus drivers to take safety classes twice a year. The others call for complying with federal safety regulations, requiring school bus drivers over 70 to show proof of physical fitness, and making the state Department of Education notify local authorities when a driver's license is revoked or suspended.