Carter Hutton made 16 of his 32 saves in the third period to help the St. Louis Blues remain unbeaten with a 3-1 win over the New York Rangers on Tuesday night.

Hutton, in his first start of the season, was a significant reason why the Rangers were stymied. His three biggest stops occurred in the third period, beginning with Michael Grabner's short-handed semi-breakaway, later followed by Jimmy Vesey's stuff-in attempt during a goalmouth scrum, and Pavel Buchnevich's try from the low slot. 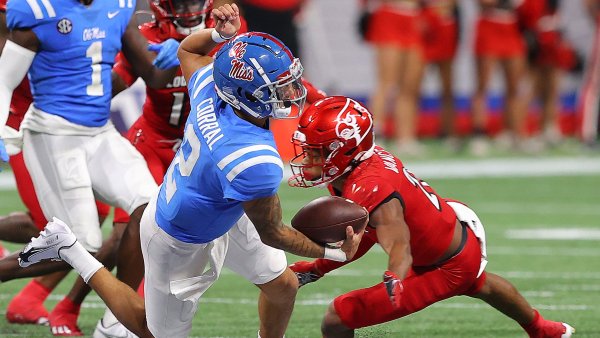 Here's a Guide to Targeting in College Football and the NFL

Buchnevich slammed his stick against the ice in frustration a moment after the whistle blew to stop play.

Even though the Rangers held an 11-7 advantage in shots, it was the Blues who went into the first intermission enjoying a 2-1 advantage. Gunnarsson opened the scoring at 15 seconds with his second of the season, a wide open wrist shot from the slot.

Mika Zibanejad tied the game 2:07 later with his fifth of the season on the power play.

New York was credited with six of the nine shots on goal following Zibanejad's goal, but it was the Blues who went ahead on Schenn's second of the season at 13:30 when the center banked Paul Stastny's rebound off goalie Henrik Lundqvist.

Benefiting a team that has started the season without Patrik Berglund (left shoulder), Jay Bouwmeester (left ankle), Robby Fabbri (left knee), Zach Sanford (left shoulder) and Alexander Steen (left hand) due to injuries, the Blues employed a tighter brand of hockey in a second period in which neither team scored and St. Louis had the two best opportunities.

The first was Scottie Upshall's short-handed semi-breakaway eight minutes into the second, and the other was Schwartz's drive from the left circle with 8:51 left, both of which were stopped by Lundqvist.

Lundqvist also was credited with a goalmouth stop on Stastny during a St. Louis power play in the third. New York's goalie finished with 20 saves.

NOTES: Adam Cracknell made his Rangers debut. New York picked up the 32-year-old right wing off waivers Monday from Dallas. He wore No. 25 and skated on the fourth line with Paul Carey and David Desharnais. . Prior to the game, New York announced rookie Filip Chytil had been assigned to AHL Hartford, and Andrew Desjardins was released from his professional tryout. . St. Louis announced it had reached an agreement with AHL San Antonio to be the Blues' affiliate. According to a statement from the Blues, they will share "select players" with San Antonio this season, and "the official affiliation" starts next season. . Blues coach Mike Yeo benched Dmitrij Jason for missing a team meeting, and scratched Wade Megan. . New York scratched defensemen Brendan Smith and Tony DeAngelo. It was the second straight game Smith, who signed a four-year, $17.4 million contract with New York on June 28, was a scratch.

Rangers: Travel to Columbus to face the Blue Jackets on Friday.