See infection control violations from nursing homes in Miami and throughout Florida in the interactive map below.

A staff member at one nursing home in Miami failed to wash her hands after handling soiled linen and removing her mask, gown and gloves, according to an inspection report. A utility room at another lacked soap or sanitizer, leaving a nurse with no way to wash, a report said.

The coronavirus is more deadly for older people and with 35 of the deaths in Washington state linked to a nursing home there, controlling infections is key.

But well before the COVID-19 crisis, controlling for infections at nursing homes was a persistent problem as those reports show. They are just two examples of what government inspectors found at facilities throughout the country in recent years.

In the current coronavirus pandemic, 19 homes in Florida have reported suspected or confirmed cases, Gov. Ron DeSantis has said, without identifying them. Two residents from an assisted living residence, Atria Willow Wood in Fort Lauderdale, died from the virus, and officials found that procedures to control its spread were not followed, the governor said.

"What the investigation has found out is that construction workers, staff and cooks who were ill were not screened, they were allowed to go, work their jobs and mix with residents unimpeded," DeSantis said on March 20. "That is exactly what you are not supposed to do."

Overall as of Thursday, 9,400 people in elder-care facilities across the country had tested positive for coronavirus and 150 had died, according to a Johns Hopkins University tally as reported by the Wall Street Journal.

Since 2016, federal inspections have found that 20 Miami nursing homes violated infection control and prevention procedures, lapses that represented a potential for harm, though no one was actually hurt, according to data from Kaiser Health News. 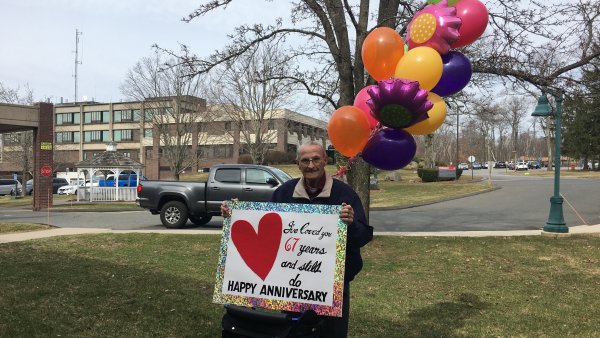 Split by COVID-19, Man Celebrates 67 Years With Wife Outside Her Nursing Home 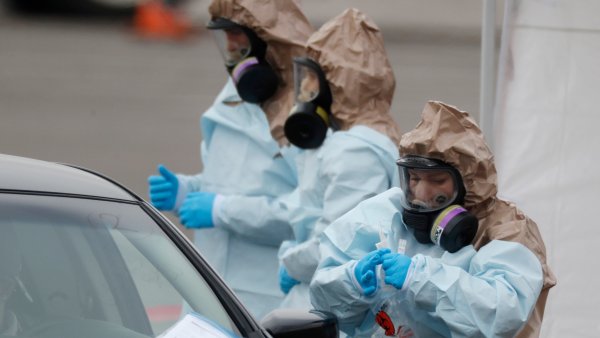 Clinical Trial Begins, But Coronavirus Vaccine Still One Year Away

The homes in Miami did not receive the worst ratings from the Centers for Medicare and Medicaid Services but rather were toward the better end. They were about split between D and E grades along a best-to-worst grouping from A to L. The grades represent a spectrum from an isolated instance of potential for minimum harm to widespread immediate jeopardy to residents’ health or safety.

The data, spanning approximately the last four years, shows nursing homes throughout the state have violated infection control and prevention procedures, lapses that represented a potential for harm.

Nursing homes in South Florida had already been drawing scrutiny since a dozen residents of one home died from heat after Hurricane Irma in 2017.

Of a resident at the home, the report noted: “Dried secretions, orange-brown in color were noted on the resident's chest, a fly was observed sitting on the resident's left shoulder and one flying near the [tracheotomy].”

Only one home responded to a request for comment about their infection control citations and preparation for responding to the new coronavirus outbreak, Consulate Health Care’s Floridean Nursing and Rehabilitation Center. The center's staff in 2018 was cited for failing to take precautions while sorting soiled linen.

The statement, issued Friday, noted that visits to its centers had been restricted except in end-of-life cases and that staff was focused on minimizing risks by using “fundamental infection control protocols, standard hand hygiene procedures, contact and airborne precautions and other key safety practices.”

Over the weekend, Florida Gov. Ron DeSantis announced the suspension of all visits to nursing homes, assisted living facilities and similar sites.

Florida is among the states with the most nursing homes — with 690, it falls behind California, Illinois, Ohio, Pennsylvania and Texas and ahead of New York.

Beyond the 35 fatalities tied to the Life Care Center in Kirkland, Washington, there have been other deaths in New Orleans and Kansas City, Kansas, and infections in nursing homes and other centers across the country, the Wall Street Journal reports.

An outbreak of at least 45 cases occurred at the Chateau Nursing and Rehabilitation Center in the Chicago suburb of Willowbrook, Illinois, according to the state’s public-health department. Fourteen residents and a staff member were infected at a state-owned veterans home in Lebanon, Oregon, according to the Wall Street Journal.

The Obama administration updated regulations to require that each nursing home designate one person to be in charge of infection control — someone who is specially trained and must work at the home full or part-time.

But the Trump administration is now trying to roll back that requirement — a move advocates worry will make it even harder to control infections.

“Infections are, as we’re seeing, just unbelievably serious for these very medically-compromised people,” said Toby Edelman, senior policy attorney at the Center for Medicare Advocacy. “It’s like the worst possible combination of bad things. You have a lot of sick people who are frail, who are held in small places. Usually they have a roommate, not enough staff.”

The Kaiser Health News has found a correlation between low staffing and poor infection control.

“We need to have an enforcement system that has some teeth,” Edelman said.

Dr. Kevin Kavanagh, the founder and board chairman of Health Watch USA, a not-for-profit patient advocacy and healthcare policy research organization, said there was already too little reporting documenting infections in nursing homes.

As far as infection control specialists, not only are they needed but they should full-time, he said.

“Part-time is too lax since it can be a very minimal commitment,” he said.

“In view of the number and frail nature of the residents along with the high carriage of antibiotic-resistant organisms, this should be a full-time position.”