Murphy spoke during a remote news conference on the virus, his first comments since Republican lawmakers' defied the requirement Thursday. But he declined to address specific questions about why troopers first blocked but then permitted lawmakers who flouted the mandate from entering the Assembly chamber.

It's unclear what happened during the confusion last week when Assembly GOP members shouted “This is America” when they were stopped, only to be let in the chamber. State police have also said they will not discuss security at the statehouse complex. 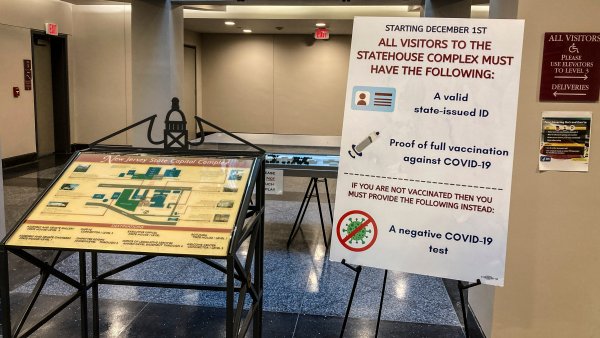 Murphy’s administration oversees the state police who are in charge of enforcing the mandate in the statehouse complex, though the requirement itself was set by the Democrats who control the Legislature as well as a commission that manages the buildings.

Murphy, who won reelection last month, said they wouldn’t get into questions concerning security and launched into an attack on GOP lawmakers over their defiance of the vaccination or negative test mandate.

“The big story from last week is not about security it’s about the idiocy of these ringleaders who are putting their fellow members’ health and families of their fellow members at risk,” he said. “This is not about freedom or civil rights. It’s about their willingness to volitionally run the risk of infecting innocent law-abiding folks who have done the right thing during this pandemic. It’s outrageous, absolutely outrageous, incredibly irresponsible, unforgivable.”

A reporter on Wednesday had asked State Police Superintendent Col. Pat Callahan for an explanation as to why troopers first blocked but then permitted lawmakers to enter the Assembly chamber, but Murphy intercepted the question.

Hundreds of students are still quarantined in a New Jersey school district, including a kindergartender whose father refused to take him out of school, according to police. He spoke to Anjali Hemphill, refuting their claim.

Republican Assembly member Hal Wirths, one of the lawmakers who entered the chamber without showing vaccination proof or a negative test, called it “absolutely outrageous" that Murphy said it's not about civil rights.

It's unclear what will happen when the next voting session happens. It's set for Dec. 16, though the Assembly has moved in-person committee hearings to virtual-only since Thursday.

The confusing scene on Thursday led to an increase of enforcement of the requirement around the statehouse: with orange barriers erected to funnel visitors to checkpoints and troopers patrolling typically little-used entryways.

Republicans have sued to try to block the mandate, which went into effect ahead of last week's voting session. A judge has set a possible hearing for next week.