At least two women were arrested Saturday after vandalizing the Black Lives Matter mural in midtown, the second time in 24 hours and the third incident this week in which the mural has been defaced.

The alleged vandals smeared black paint onto the yellow mural Saturday afternoon, damaging it after crews freshly repaired the mural after Friday's attack. An NYPD officer attempting to arrest one of the women defacing the mural slipped in the paint and appeared to sustain minor injuries.

"Thankfully our brother will be OK, but this nonsense needs to stop," the Police Benevolent Association posted to Instagram.

Video captured the woman yelling "refund the police" several times as she struggled with police, working to smear the paint across as much of the roadway before she was ultimately placed into custody.

24 hours earlier, a coordinated effort involving about 10 people targeted the mural with blue paint around 4 p.m. Friday. There were plans going around on social media with a group of people discussing pulling off the stunt.

One of those arrested, a woman wearing a rainbow flag as a cape and a shirt that read "All Lives Matter," was put into custody, smirking when asked why she did it. She was seen on video dumping a can of paint while running along the length of the mural, with another woman joining her, and then putting handprints into the spilled paint.

The second woman later spoke with NBC New York, saying that it should read "All Lives Matter" and that using taxpayer money for it was wrong. One of the people taken into custody appeared to be the same woman who talked with News 4 just a week ago, and vowed at that time that she would come back to deface the mural.

Two women — 39-year-old Juliet Germanotta and 25-year-old D'Anna Morgan — were arrested, along with 44-year-old Luis Martinez. All three NYC residents were charged with criminal mischief, and released with a desk appearance ticket. A 64-year-old woman was also issued a criminal court summons for illegally posting flyers.

Opposing groups chanted and shouted in front of the doors to Trump Tower as she was being arrested. The confrontation got heated quickly, with one woman kicking a can of the blue paint in anger that splashed nearby officers.

Police blocked off some traffic on Fifth Avenue between 56th and 57th Streets just minutes after the incident occurred. Crews were able to clean up the vandalism by nightfall, but those responsible said they would be back to do it again.

On Monday, the mural -- a project President Donald Trump blasted as a "symbol of hate" -- was defaced with a large splash of red paint.

Photos and videos posted to social media around lunchtime showed red paint all over the letters "liv" in Lives. One video, obtained by News 4, shows a person dressed in dark colors and a hat, dump a single can of paint across the mural before running away; the NYPD is investigating and on Friday released surveillance images of the suspect, hoping someone will recognize him.

Hours after that incident, Mayor Bill de Blasio confirmed the mural had already been repainted by city employees, removing any hint of the red paint.

Nikki Rospond, the woman who caught the vandal on camera, said she works in the neighborhood and was on her lunch break Monday when she decided to come by and take a video of the whole mural.

After a brief postponement, the painting was finished last week. Mayor de Blasio along with the Rev. Al Sharpton joined the effort last Thursday, both helping to paint the letter "L" in lives as onlookers chanted "Black Lives Matter."

The mural is one of five found in each of the city's five boroughs. 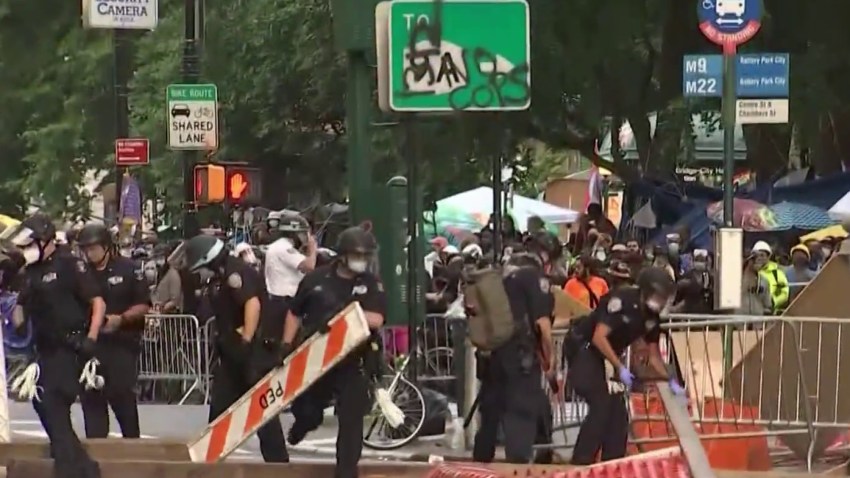