The Lighter Days of the ‘Cuomo Brothers' Show Are Long Gone

It's very early in the probe, but current and ex-law enforcement officials say possible investigative avenues could include looks at potential false statements, any scheme to defraud the feds of funds or misuse of funds

Some television shows age much better than others.

For CNN, last spring's prime-time banter between Chris Cuomo and his older brother, New York Gov. Andrew Cuomo, looks worse in hindsight as the governor's administration is questioned about its role in failing to disclose the true number of COVID-19 nursing home deaths.

CNN is covering that story, but not on Chris Cuomo's show. The network said it had reinstated a prohibition on Cuomo interviewing or doing stories about his brother that it had temporarily lifted last spring.

The brothers were both in the spotlight last March. Chris Cuomo caught COVID-19 and continued anchoring his show from his basement, while the governor dealt with New York's hellish days as the nation's early coronavirus epicenter. Andrew Cuomo's near-daily briefing was widely televised and, to some viewers, embraced as a counterpoint to those held by former President Donald Trump.

In his press conference Thursday morning, Gov. Andrew Cuomo invited his brother Chris Cuomo to talk to the public. Chris has tested positive for COVID-19, and says he is being hit with some strange dreams while he's had the virus.

Nine times between March 19 and June 24, 2020, the governor appeared on his brother's show. The trash-talking and brotherly love between the two Italians from Queens was fun if occasionally cheesy, like when Chris Cuomo mocked his brother's big nose with a giant cotton swab he said would be necessary to give him a COVID-19 test.

“I found these interviews to be very entertaining, and perhaps Chris could ask questions of his brother that other people can't,” said Roy Gutterman, a media law professor at Syracuse University. "But from the very beginning, I thought it was wildly inappropriate.

“It's Journalism 101,” he said. “We tell our students you shouldn't interview your family and friends.”

The policy avoids a conflict of interest — can one brother really be expected to ask tough questions of another? — or at the very least the appearance of one.

Law enforcement officials say the inquiry began recently and in part after complaints from both Republican and Democratic state officials about delays in reporting accurate nursing home death statistics tied to COVID-19.

Through a spokeswoman, CNN said that the early months of the pandemic were an extraordinary time.

“We felt that Chris speaking with his brother about the challenges of what millions of American families were struggling with was of significant human interest,” CNN said. “As a result, we made an exception to a rule that we have had in place since 2013 which prevents Chris from interviewing his brother, and that rule remains in place today.”

Largely bubbling below the radar for months, questions about Andrew Cuomo have come to the forefront in the past few weeks. New York's attorney general issued a report that said the administration minimized the number of nursing home residents who died of COVID-19 by excluding those who died elsewhere, usually a hospital.

This was significant because of a Cuomo administration directive in March that nursing homes should not deny admission or readmission to a patient because they had COVID-19. The policy was rescinded two months later.

Keeping the true number of nursing home residents who died hidden would theoretically deflect any blame for a bad policy choice. The governor has blamed staff entering nursing homes for spreading the virus to the vulnerable population, not patients brought in with COVID-19. He has said it would be discriminatory not to let those patients into nursing homes.

Last week, it was revealed that an Andrew Cuomo aide told New York legislators that the true picture of nursing home deaths wasn't revealed for fear it would be used against the governor during an investigation launched by Trump’s Justice Department.

The last time the governor appeared on his brother's show, in June, Chris Cuomo asked him: “Nursing homes. People died there. They didn't have to. It was mismanaged. And the operators have been given immunity. What do you have to say about that?”

The governor replied that some of what his brother said was incorrect. “But that's OK,” he said. “It's your show. You say whatever you want to say.”

He went on to say that it was a tragic situation “and we have to figure out how to do it better next time.”

CNN has covered the most recent developments several times outside of Chris Cuomo's show, including at least 24 times last week alone. Two notable instances were a thorough report by Brianna Keilar on Jan. 29 and Jake Tapper on “State of the Union” Sunday. Both anchors said they had asked Andrew Cuomo to appear on their show and been turned down — dozens of times, in Tapper's case.

The governor “made a bad decision that may have cost lives and then his administration hid that data from the public,” Tapper said. 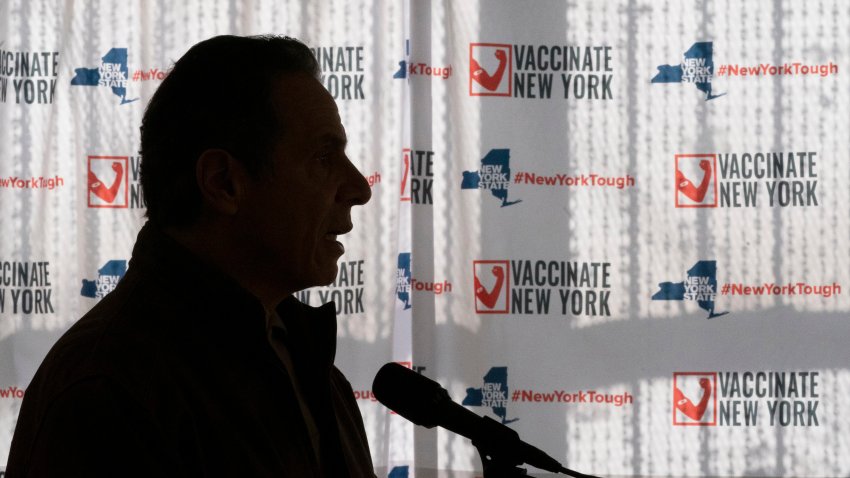 Although Chris Cuomo, following his network's policy, hasn't addressed the latest stories, the byplay with his brother did come up just before the election last October in a heated exchange on his show with Trump campaign spokesman Tim Murtaugh.

Murtaugh criticized Cuomo for asking “self-righteous questions” about whether the Trump administration took COVID-19 seriously, and referenced the giant swab.

“Does this look like a couple of guys who were taking it seriously?” he said. “You had your brother on for the Cuomo Brothers Comedy Hour.”