Prosecutors in other jurisdictions continue to review additional allegations of sexual misconduct against the governor, as does the government of the United States

"We thank the brave individuals who came forward and cooperated with our office during this investigation, and gratefully acknowledge our colleagues, Attorney General [Letitia] James and the New York State Assembly, for their diligence and collaboration," Acting Nassau County District Attorney Joyce Smith said.

Her office had been investigating one of the 11 separate allegations of misconduct uncovered at the former governor as part of the lengthy review by James' office. That case involved an unidentified state trooper who alleged Cuomo groped her at the race track in 2019; the trooper had reported feeling "violated" by the attention.

According to the report, the trooper said Cuomo ran the palm of his left hand across her abdomen, to her belly button and then to her right hip, where she kept her gun, while she held a door open for him as he left an event at the track on Sept. 23, 2019.

The trooper, a member of Cuomo's security detail, told James' investigators that Cuomo's conduct at the event made her feel “completely violated because to me, like that’s between my chest and my privates.” James' report said that although the trooper was upset by Cuomo's unwanted touching, she did not feel she could do anything about it.

“I’m a trooper, newly assigned to the travel team. Do I want to make waves? No,” she said, according to the report. “I’ve heard horror stories about people getting kicked off the detail or transferred over like little things. ... I had no plans to report it.”

The trooper told James’ investigators that what happened at Belmont Park was just one of many instances of Cuomo’s “flirtatious” and “creepy” behavior toward her. One time, in an elevator, he traced his finger from her neck to her back, she said. Another time, he asked to kiss her in the driveway outside his Mount Kisco home, she said.

“I remember just freezing, being — in the back of my head, I’m like, oh, how do I say no politely?” she told investigators.

The Nassau County investigation was limited to the encounter at Belmont Park.

Prosecutors in other jurisdictions continue to review additional allegations of sexual misconduct against the governor, as does the government of the United States. There is no indication that the Albany district attorney's office will cancel its scheduling hearing on the Cuomo case, but that remains up in the air at this point.

Neither the Albany district attorney nor New York Attorney General Letitia James had an immediate comment. Cuomo spokesperson Rich Azzopardi didn't directly address Smith's decision in a statement released Thursday afternoon, but said in a statement that "with each passing day it becomes more and more clear that the Attorney General’s report was the intersection of gross prosecutorial misconduct and an abuse of government power for political purposes. He went on to blame her report for starting "a media and political stampede" against Cuomo.

"James never presented the evidence to support such claims, her report omitted important exculpatory facts, she admitted her personal interference in preparing the report and had still refused to answer any questions from the press," the statement continued. Cuomo and his lawyers have repeatedly denied all allegations of sexual misconduct.

He also said that Cuomo didn't recall touching the trooper. Azzopardi said it was common for the former governor to acknowledge a trooper who would hold the door open for him. Azzopardi didn't respond to a question about whether Cuomo would acknowledge troopers by touching them.

“As he has said many times, Gov. Cuomo did not remember touching the trooper, but said that it was a common custom for him to acknowledge the presence of a trooper — male or female — holding a door as he walked past them," Azzopardi said. "This was only meant to be an acknowledgment of their presence and nothing more.”

New York officials disclosed earlier this month that the U.S. Department of Justice began a civil inquiry in August into sexual harassment claims made against Cuomo.

The exact nature of the inquiry and its current status was unclear. 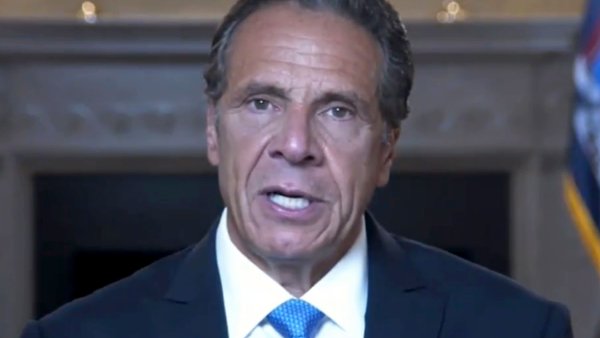 2021 Notebook: the Scandals That Took Down Andrew Cuomo

The office of Gov. Kathy Hochul, who took office when Cuomo resigned in August, said it hired a law firm in October to handle “matters relating to ongoing investigations inherited from the previous administration,” and that one of those matters was an investigation by the Justice Department’s civil rights division and the U.S. attorney’s office in Brooklyn.

“As this is an ongoing investigation, we will not comment further at this time,” said Hochul’s press secretary, Hazel Crampton-Hays.

The law firm’s hiring was initially disclosed in a contract made public Thursday as a result of public records requests by several news organizations.

The contract said the firm, Willkie Farr and Gallagher, is representing the governor’s office in several investigations related to the previous administration, including a Justice Department inquiry “related to sexual harassment claims made against the then-governor.”

Cuomo announced he would resign Aug. 10, one week after an investigative report commissioned by New York Attorney General Letitia James concluded he had sexually harassed 11 women. His last day in office was Aug. 23.

Azzopardi said the former governor had been made aware of the inquiry.

“Our understanding is that the civil division opened an inquiry in August based upon the AG’s politically motivated sham report and we have heard nothing since,” he said.

The department’s civil rights division has some enforcement powers under federal anti-discrimination law. It launched an initiative in 2018 to fight sexual harassment of government employees and handles complaints made under the U.S. Equal Employment Opportunity Commission.

Cuomo has acknowledged making comments to some women that made them uncomfortable, including jokes interpreted as unwanted flirtation, but he has denied sexually harassing anyone or touching anyone inappropriately.

The Albany County sheriff filed a criminal complaint against Cuomo this fall accusing him of groping a female aide at the governor’s mansion in late 2020. His arraignment on the charge has been postponed until at least January while the county district attorney investigates the allegations.