The couple of inches from Thursday put this month into the top 10 snowiest Februarys on record for NYC, with 10 days left to go and another possible storm threatening Monday, but that could be more rain than snow

The latest in a seemingly relentless series of winter storms is sticking around for another day after descending upon the tri-state area early Thursday. Before it finally moves out, some areas in the snow-weary region could see more than 10 inches of snow from the long-lasting system.

The heaviest snowfall is long behind us, though an additional 1-3 inches could come Friday as the storm lingers until nighttime. By that point, much of the tri-state area, including New York City, is expected to see 5 to 8 inches accumulate.

Bands of heavy snowfall arrived in New York City and parts of New Jersey during the morning rush hour Thursday, leading to some slick roads and sidewalks, though the heaviest (and steadiest) snowfall rates hit later in the day.

Winter weather advisories remain in effect for most of the tri-state area through Friday night. Check the latest weather alerts for your neighborhood here.

Alternate side parking and roadway dining in New York City are suspended through Saturday as part of the Sanitation Department's snow alert, though sidewalk dining can continue. Some city vaccination sites were affected by the storm, as were a number in New Jersey and elsewhere in New York state.

Not sure how the process works? Or when you might be able to get an appointment? Check out our handy tri-state vaccine site finder and FAQs here

Experts say the extreme weather covering much of the U.S. is causing enough disruption to vaccinations that the country may take slightly longer to reach herd immunity against COVID-19, potentially extending the length of the pandemic. On Long Island, the winter weather led to long lines at vaccination centers that stayed open, although some wished they had closed rather than risk the slick roads.

Once the storm moves out Friday night, the weather is expected to be uneventful through the weekend but quite chilly in the mid-30s. Any accumulating snow will likely stick around on top of the snow still out there from earlier storms since temperatures will barely top the freezing mark and wind chills will be biting.

It's already New York City's 10th snowiest February on record, with 10 days left to go, counting Thursday's couple of inches in Central Park as of 2 p.m.

Temperatures climb back into the low 40s Monday, when yet another rain/snow event could hit the tri-state area. At this point, it looks like mainly rain for New York City and more snow north and west of the five boroughs. High temperatures push near 50 in the city by the middle of next week, which will melt some snow. 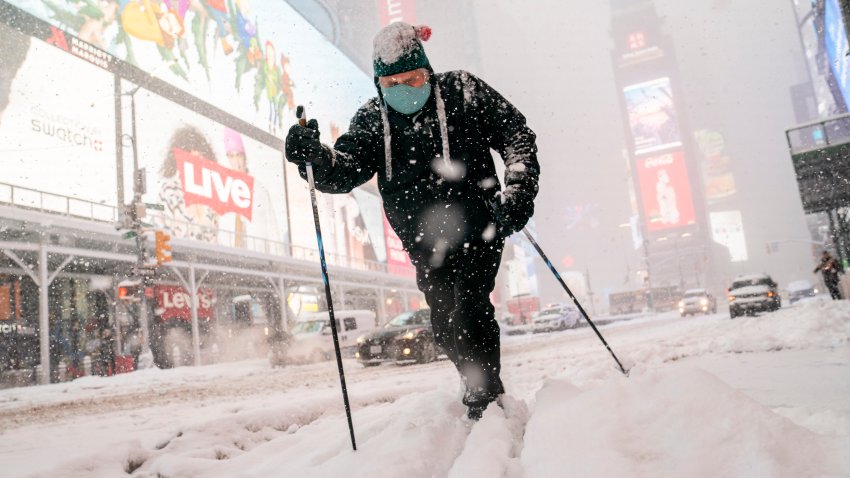