If these past few days of punishing heat felt hotter and more unusual than normal, you'd be right. Sunday delivered not one, but two record breakers for Newark.

The New Jersey city record a new daily record high (previous high was 99 degrees back in 2010). The high temperature Sunday reached 102, which also gave Newark its fifth day in a row of triple-digit temps. That's the longest stretch of days at 100 or higher in the city's recorded history.

Newark's triple-digit record spree is especially shocking because the city only averages about one day a year with a high of 100 degrees.

Sunday had long been expected to knock on the doors of some previous heat records, continuing the week's unrelenting blistering heat and humidity.

Forecasts had predicted New York City could hit 97 degrees, which would tie the July 24 record.

Whether or not we reach that record depends on if and when storms develop in the afternoon. If they start popping early Sunday afternoon, we'll probably fall short.

It is also expected to stay in the 90s Monday, which would make seven straight days of such heat. That would make this heat wave more than twice as long as the one the city experienced just last week, which in hindsight now seems like a breeze.

Before the heat clears out, there's a risk of severe storms Monday afternoon and evening.

Check the latest severe weather alerts in your neighborhood.

Organizers made the decision to cut the run and cycling portions of the New York City Triathlon in half, lowering the run from 6.2 miles to 2.5 miles and the bike ride from 24.8 miles down to 12.4 miles. The duathlon, which had a 2-mile run, will be shortened to just 1 mile.

By reducing the lengths of the legs for Sunday's athletes, race organizers hope to minimize any heat-related injuries on what's expected to be one of the most unbearable days of this heatwave. More than 2,400 athletes are participating.

Mercifully, thunderstorms return Monday afternoon to cool the tri-state back to near-average late-July temperatures by Tuesday. The rest of next week should see temperatures in the mid 80s, a welcome reprieve from the wicked stretch of blistering heat and smothering humidity that has seized the tri-state area.

Track any approaching weather using our interactive radar below.

In order to monitor any potential outages in networks under a lot of stress during the heat wave, Con-Ed opened its emergency response center to deal with the increased demand. The utility is asking New Yorkers to conserve energy by turning off A/C in unoccupied rooms and to use dishwashers or laundry early in the morning or late at night, rather than during peak hours.

"If people do lose power, we can respond to those outages and restore power as quickly and safely as possible," a Con Edison spokesperson said.

The utility also had some tips for saving energy:

Looking for an NYC cooling center? Find the closest one to you right here.

For those in the city looking to cool off with a swim, NYC Parks said outdoor pools would be open until 7 p.m. p.m. Thursday at the Olympic- and intermediate-sized pools due to the heat advisory. For those thinking of turning a nearby fire hydrant into a sprinkler, the FDNY is urging people to take advantage of the sprinkler spray cap program first.

"It’s important to not open up the fire hydrants. When that is done without the sprinkler caps, it reduces water pressure and can affect our ability to effectively fight fires," said FDNY Chief of Department John Hodgens.

Those who plan on cooling down in the waters off Long Island, watch out for rip currents (and obviously sharks).

New York City's average number of days above 90 degrees in July is 11, five days more than the current total this year. The heat wave will eclipse that mark by the time all is said and done. Dry Vs. Humid Heat: NY Doctor Says Which Is More Dangerous, And Other Hot Weather Perils 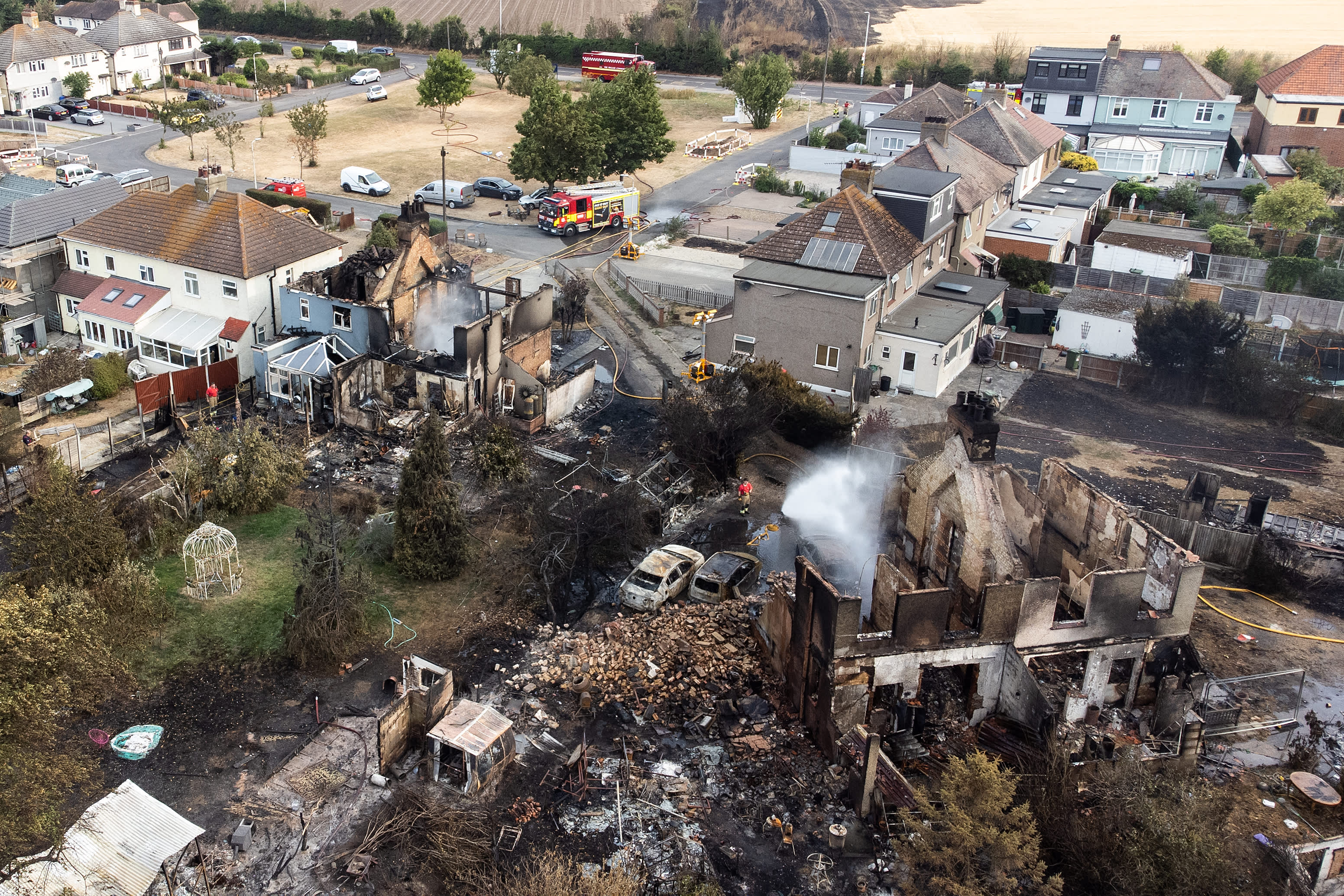 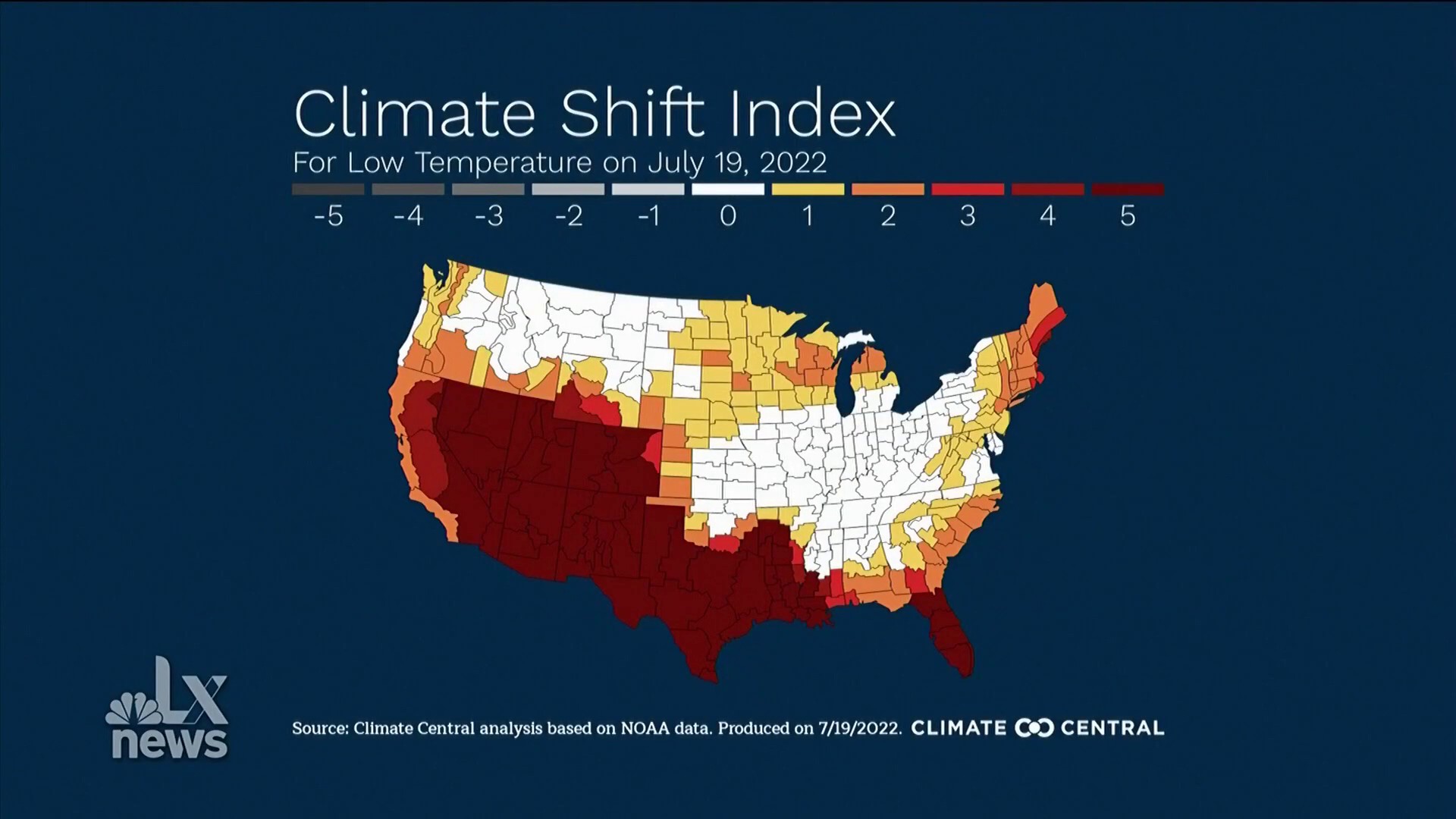 This Map Shows the ‘Fingerprints’ of Climate Change

The city had its official heat wave of the summer last week, with Thursday being the third straight day in the city where temperatures hit 90 degrees or above. This heat wave will be even hotter and possibly more than twice as long.

Gov. Kathy Hochul issued a statewide warning on the heat before the latest wave started, saying on Monday, "The next several days will bring extreme heat throughout the state with dangerous heat indices potentially reaching into the 100s."

"I am urging all New Yorkers to prepare for heat and humidity this week and to keep a close eye on the weather over the next couple of days," the Democrat added. "As New Yorkers, we take care of one another, so please don't forget to check on neighbors, especially seniors, those with young children, and people with disabilities."

The New York State Department of Health also reminds New Yorkers that heat is the number one weather-related killer in the United States. Heat-related deaths and illnesses are preventable, yet annually many people suffer from the effects of extreme heat. Some individuals are at a higher risk for heat-related illness than others.

Temperatures are expected to reach a high of 99 degrees this weekend, and officials are working to ensure the safety of all participants in the New York City triathlon, Myles Miller reports.

New Yorkers should learn the risk factors and symptoms of heat-related illness to protect themselves and those they love.

Symptoms of heat stroke include: