From the U.S. women's national soccer team in the bronze medal match to Kevin Durant looking to take U.S. men's basketball to the finals and the first sport climbing medals in Olympic history, there was plenty to see

There was no shortage of must-see action on Day 13 of the Tokyo Olympics. The U.S. women's national soccer team earned its first bronze medal while Kevin Durant and the U.S. men's basketball team inched closer to gold.

The first medals in sport climbing were awarded (it's a brand new Olympic sport this year) and one American man made the podium.

A big night on the track went down the night before. Fan-favorite Grant Holloway and Devon Allen, known for his recent dance moves, were favorites heading into a jam-packed 110m men's hurdles final, but only one of them would get a medal (and it wasn't gold).

Without further ado, here are our 4 to Watch on Day 13:

The U.S. women’s soccer team lost to Canada 1-0 during the semifinals on Monday, missing out on an opportunity to play for gold for the second straight Olympics.

The U.S. women’s soccer team bounced back from a gutting semifinal defeat against Canada to win a bronze in their medal match against Australia.

The team isn't standing atop the perch they expected to, nor are the medals around the players' necks the color they had been hoping for, but they made their return to the podium after failing to get there in 2016 for the first time.

It was two of the team's gold-medal winning veterans who helped get them there on Thursday. Megan Rapinoe and NJ's Carli Lloyd each scored two goals to lead the U.S. to a 4-3 win over Australia in the bronze medal game at the Tokyo Olympics.

Australia's Emily Gielnik scored on a strike from outside the box in the 90th minute to cut the U.S. lead to 4-3. But the Americans managed to hold on, surviving a late scramble in the sixth minute of extra time, to seal the first bronze medal for the USWNT.

The U.S. won gold in four of the first five Games since women's soccer became an Olympic sport in 1996, taking silver during the 2000 Sydney Olympics.

MORE: See all the best soccer goals from the women's tournament in Tokyo

Grant Holloway was considered the favorite, leading the American men into the 110m hurdles final. He posted the fastest time in qualifying at 13.02, just .22 seconds off the world record time set by American Aries Merritt in 2012. He was joined by teammate Devon Allen, who made some headlines for a dance.

But the race did not go as Team USA planned, as there was a stunning upset by two Jamaican runners. Hansle Parchment of Jamaica won gold in the upset, posting a time of 13.04, and fellow Jamaican Ronald Levy claimed bronze.

Grant Holloway finished second to claim silver in men's 110m hurdles, posting a time of 13.09 despite being the overwhelming favorite to win it all. Allen finished fourth.

Grant Holloway took home the silver medal in the 110m hurdles, coming in behind Jamaica.

It was the second shocking disappointment of the night for Team USA on the track, after the men's 4x100m relay team finished sixth in their opening heat, eliminating them from the competition before the final. The team didn't drop the baton this time, but still struggled with a handoff enough to cost them precious time — which would end up biting them, as they missed out on moving on by .02 seconds.

The United States continued its domination in Track and Field in Tokyo on Thursday, this time turning in golden performances in the field events.

Katie Nageotte took the gold medal in in the women’s pole vault, and Ryan Crouser dominated the men’s shot put for his second consecutive gold medal. Grant Holloway added a silver in the men’s 110m hurdles, and Joe Kovacs finished second in the shot put, behind Crouser.

In all, the U.S. has won 20 medals in track and field in Tokyo. The closest to Team USA? Jamaica, with seven.

In the shot put, Crouser beat his own Olympic record, throwing the shot put 23.30 meters on his final attempt to take the gold. New Zealand’s Tom Walsh won bronze, which he also took in 2016, making it a repeat across the board on the winner’s podium. It is the first time that has happened in a track and field event in Olympic history.

In the pole vault, Nageotte cleared a 4.9-meter vault, beating Russia’s Anzhelika Sidorova and Great Britain’s Holly Bradshaw, who both cleared 4.85 meters. It was the third time the U.S. won gold in the event.

Vashti Cunningham was the only member of Team USA to advance in women's high jump. Cunningham automatically qualified after posting a jump of 1.95m on her third and final attempt. She placed 13th in high jump at the 2016 Rio Olympics and is a favorite to win it all at Tokyo.

Team USA's Will Claye finished fourth in men's triple jump. His longest jump was 17.44m on his third attempt. The two-time silver medalist looked to claim gold for the United States with the absence of two-time Olympic triple jump champion Christian Taylor, who did not compete due to a ruptured Achilles tendon. Pedro Pablo Pichardo of Portugal won gold with a jump of 17.98m on his third attempt. 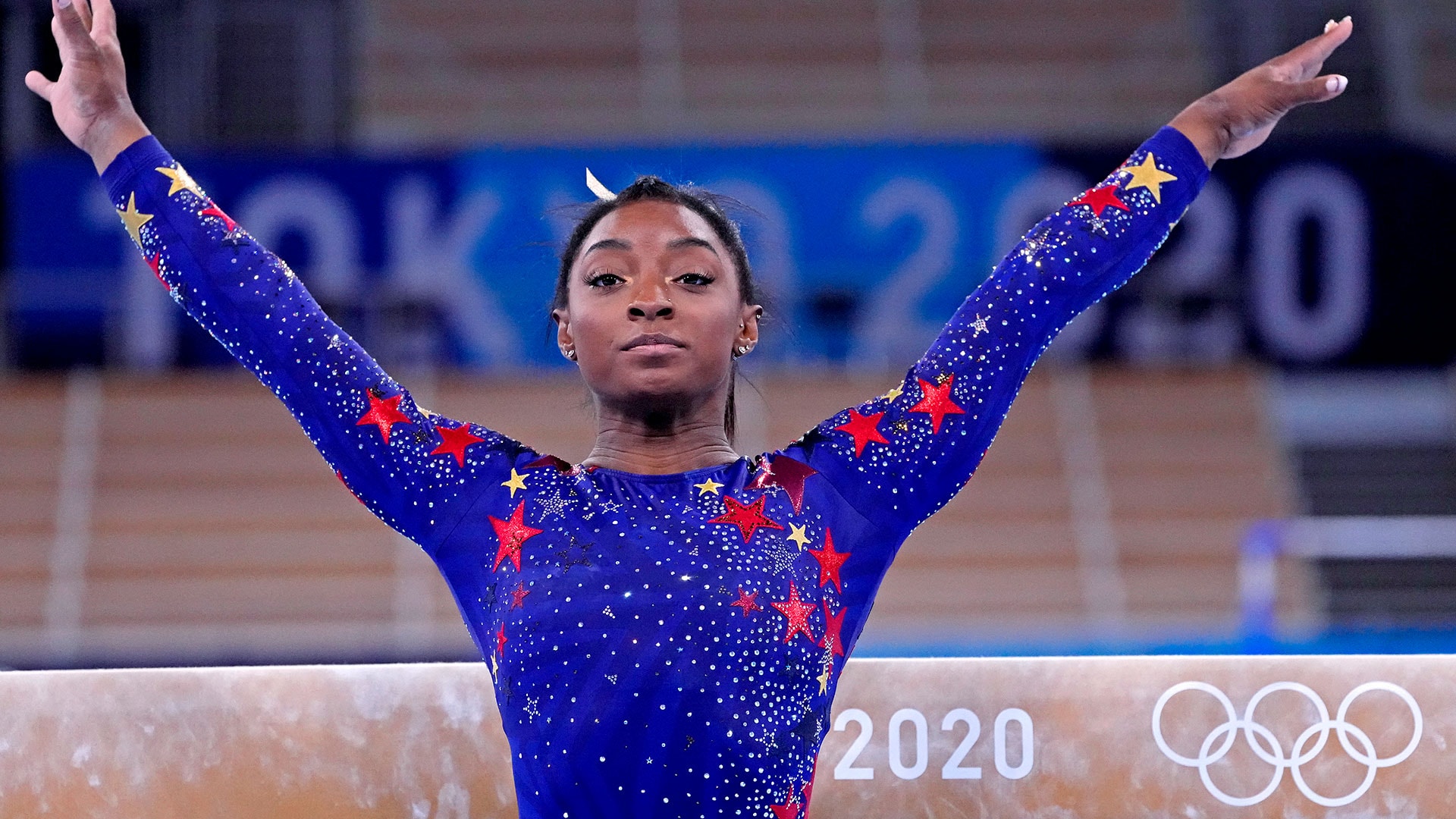 Team USA men’s basketball advanced to the semifinals after defeating Spain. Kevin Durant led the charge for the U.S., but it was no easy feat getting around a stellar performance from Spain’s Ricky Rubio.

Team USA is one wins away from its fourth straight men’s basketball gold medal.

There has been two versions of the U.S. men's basketball team during the Tokyo Olympics. And both showed up during a tale of two halves in the team's semifinal matchup.

There was the first-half version, the one that trailed by 15 points and seemed destined to fight for bronze. And there was the second-half version, a dominant force that turned the game around and seemed destined to steamroll any opponent during its quest for a fourth straight gold medal. Team USA is now one victory from doing just that after defeating Australia 97-78 on Thursday.

A 28-4 U.S. run that started late in the second quarter and carried into the third turned what had been a 15-point deficit into a comfortable lead. The United States advanced to the gold medal game on Friday at 10:30 p.m. ET against the winner of France and Slovenia.

Kevin Durant led the way with 23 points and nine rebounds, placing him one win away from tying Carmelo Anthony's Olympic record of three gold medals in basketball. Devin Booker added 20 points on 7-for-10 shooting.

Team USA will face the winner of Slovenia-France in the gold medal game on Friday, with the two losers meeting in the bronze medal game on Saturday. Slovenia and France play at 7 a.m. ET on Thursday.

After sport climbing made its Olympic debut on Tuesday, American climbers Colin Duffy and Nathaniel Coleman will compete for the first-ever Olympic gold medal in the sport on Thursday.

Two Americans were among seven climbers who raced to the top at Tokyo’s Aomi Urban Sports Park on Thursday, and one of them will go home with the first-ever silver Olympic medal in sport climbing.

Team USA’s Nathaniel Coleman placed second, just shy of winning the gold that went to 18-year-old Alberto Lopez of Spain. U.S. climber Colin Duffy placed seven after he didn't perform as well as he hoped during the speed climbing round, thanks to a false start.

Duffy, 17, came in third overall during qualifying after ranking sixth in speed, fifth in bouldering and second in lead.

Coleman, on the other hand, was eighth overall and the final qualifier for the final. He ranked 10th in speed, 11th in bouldering and fifth in lead.

MORE: What's new in Tokyo? Everything you need to know about sport climbing