From the last track race of Allyson Felix's storied Olympic career to two epic gold medal showdowns and USA's Nelly Korda taking gold in the golf final, there was plenty of action

There was no shortage of must-see action on Day 15 of the Tokyo Olympics. Kevin Durant and the U.S. men's basketball team claimed the gold medal, and in the process got their revenge on France for their humiliating opening loss. Just minutes later, USA's Nelly Korda was able to survive two big charges from other players and take the gold in the women's golf tournament.

Allyson Felix added one more medal to surpass Carl Legend as the most decorated track Olympian in history. And USA baseballer Eddie Alvarez became the third person in U.S. history to medal in both the Summer and Winter Olympics.

Without further ado, here are our 4 to Watch on Day 15:

1. USA Basketball Gets Revenge vs. France to Take Gold Medal

Team USA lost its opening basketball game to France in an absolute stunner but got a chance for revenge in the game that counts the most: the gold medal one.

And the U.S. took full advantage of that opportunity, winning the gold medal match 87-82.

The Americans held only a seven-point lead with three minutes to go, just as they did in the preliminary game against France, where France went on a run and got the win. The French cut it to three with 10 seconds left on two free throws by Nando De Colo.

Kevin Durant made both of his free throws with 8.8 seconds left, two of his game-high 29 points, to seal the win. Durant was dominant through the first three quarters.

"It’s winning time," Durant said after the game when asked how he came through for the team in the gold medal game.

During the tournament, Durant — now a three-time gold medalist — passed Carmelo Anthony for most points scored in Team USA history. The United States has won gold in every Olympics since 2008.

Jayson Tatum added 19 points for the U.S. off the bench, while starting guards Jrue Holiday and Damian Lillard each tallied 11 points. Team USA committed only nine turnovers to France’s 18.

Allyson Felix cemented her place as the greatest American track and field athlete of all time Saturday morning.

The 35-year-old track star won her 11th Olympic medal on Saturday morning, surpassing the American record of 10 medals in track and field set by Carl Lewis in 1996. Only Paavo Nurmi of Finland, who won 12 medals during his career as a long-distance runner, holds more.

On Friday in the 400m race, Felix earned her 10th medal in her fifth and final Olympics, coming from behind to claim bronze After the race, she delivered a message to her young daughter over a video call.

“No matter what it feels is stacked against you, you go out with character and integrity, you give your all, and that’s all anybody else can ask of you, and you’re proud with that.” Felix said.

There might never be another U.S. track and field athlete like Felix, but her indelible impact will continue to inspire a new wave of women to rise and dominate the sport as she has since 2004. 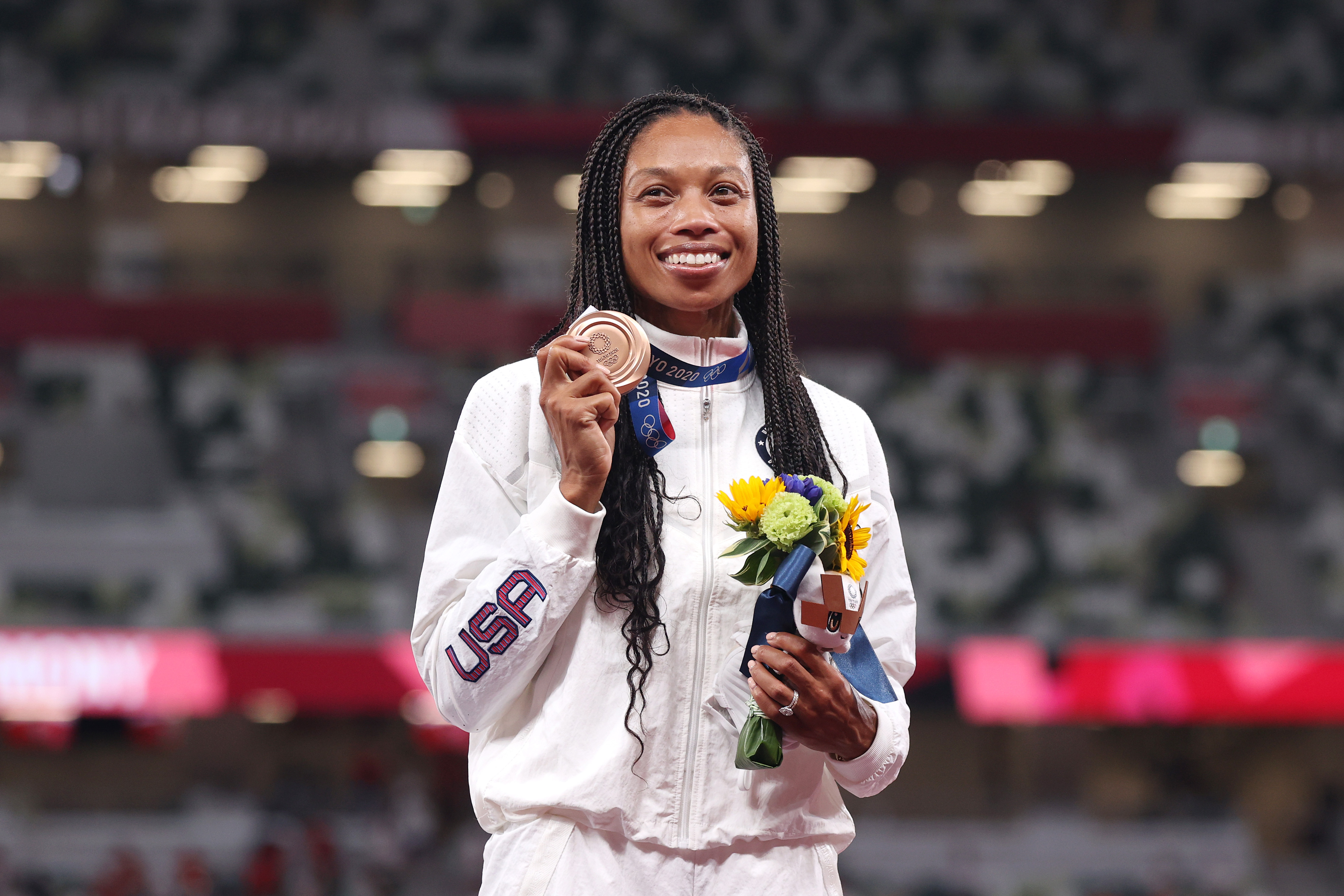 Team USA beat South Korea on Thursday, paving the way for a rematch against Japan for Olympic gold

Baseball's return at the 2020 Tokyo Olympics was a triumphant one for the host nation.

Japan took home gold with a 2-0 win over Team USA at the Yokohama Stadium on Saturday. The victory capped off an undefeated tournament run and gave the country its first Olympic gold medal in the sport.

The U.S., meanwhile, picked up its second straight Olympic baseball medal. Team USA won bronze at the 2008 Beijing Olympics, the last Games to hold a baseball tournament. The U.S. now has one gold, one silver and two bronzes all time.

Even with the loss, Eddy Alvarez officially became the third American and sixth Olympian ever to medal at both the Summer and Winter Olympics. Alvarez, who won silver in the 2014 Sochi Olympics in short track, joined an exclusive club that also includes Eddie Eagan (boxing in 1920, bobsled in 1932) and Lauryn Williams (track and field in 2004 and 2012, bobsled in 2014).

The host nation struck first on Saturday. Munetaka Murakami got Japan on the board in the third inning with a solo home run against Team USA starter Nick Martinez.

Martinez faced trouble in the fourth as well as Japan loaded the bases with one out. He got the U.S. out of the inning unscathed, though, by forcing a fielder's choice and striking out Ryosuke Kikuchi.

Korda shot a -2 (69) in her final round, which put her at -17 for the tournament. She had a three-shot lead entering the final round but saw disappear as Ko and Inami came charging late.

With Korda in the lead by one stroke on the 17th hole, the play was suspended for 49 minutes due to a tropical storm Korda pared 18 to win gold. Inami and Ko went to a playoff to decide silver and bronze, with Inami winning silver and Ko bronze.

MORE: Nelly Korda unpacks her third round, looks ahead to last 18 holes