Wearing his signature red beret, Curtis Sliwa is on television, stroking one of his 16 rescue cats in a campaign ad. He’s in the subway with his Guardian Angels anti-crime patrol. He's breaking up restaurant brawls in Little Italy and blaming the mafia and the mayor when he’s banned from judging the meatball-eating contest.

This is the how Republican nominee is mounting an improbable quest to become New York City's mayor — always in his red hat.

Sliwa has spent decades as a stunt-loving New York character, with a knack for keeping news cameras around and a history of bombastic statements. He once survived an attempted mob hit incited by his radio commentary.

The Republican insists his campaign this year is not a long shot, but more of a David-and-Goliath slingshot, with Sliwa as a streetwise “man of the people” speaking out about crime and disorder.

“I think most people don’t necessarily see me as a Republican. They see me more as a populist. ‘That’s Curtis. We know him,’” Sliwa said. He says the fact that he won the Republican nomination despite having never voted for Trump is a sign he can improbably win over Democrats.

New York City mayoral candidates Fernando Mateo and Curtis Sliwa went head to head again Thursday during a GOP debate. This time, it was in person.

At a campaign rally later that day, he dismissed the idea that winning was impossible, saying he’s “been David versus Goliath” his entire life.

Sliwa is widely expected to lose next month’s election to Brooklyn Borough President Eric Adams, a Democrat and former New York City police captain who would be the city’s second Black mayor.

In a city where Democrats outnumber Republicans 7-to-1, Adams emerged from a crowded primary field as the candidate with a more moderate image, a pro-business approach and singular perspective on crime that blended his time with the NYPD, his past advocacy calling for reform in the department and experiences of police brutality while a teenager.

Sliwa, 67, has been a ubiquitous New York figure since he founded the Guardian Angels anti-crime group in 1979. The unarmed unit of young men and women clad in red berets and matching jackets started by patrolling New York City’s then-crime-plagued subway system and expanded out into the city before setting up chapters across the U.S. 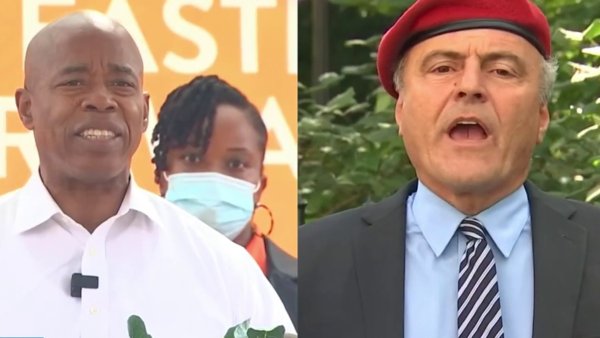 The 320-square foot Upper West Side apartment that Sliwa shares with his wife Nancy is decorated with copious campaign posters and images of himself and their many cats. Part of one wall is covered with old newspaper clippings and posters of the Guardian Angels’ early exploits, a sign that reads “Crack Down on Crack” and a few police sketches of decades-old rape suspects.

He says the tableau is a reminder of the group’s roots in a grittier New York.

“His analysis of New York is, in some ways, very antiquated and I think a lot of voters see him as a vestige of old New York, with his red beret and I would say racialized understanding of how the city operates, which I don’t think many New Yorkers are interested in right now,” said Christina Greer, an associate professor of Political Science at Fordham University.

Former NYC Mayor Rudy Giuliani agreed to sit down with NBC New York's Melissa Russo to discuss the upcoming 20th anniversary of 9/11, but their discussion was wide-ranging and personal, covering Giuliani’s shifting legacy, his anger at the FBI, and allegations that he is an alcoholic.

Two decades of Rudy Giuliani and Michael Bloomberg in the mayor’s office prove Republicans can — or at least once could — overcome the Democrats' advantage in the city.

But Sliwa’s style and reputation, Greer said, has meant that he is “not really taken seriously by a certain segment of the population.”

Sliwa’s flair for getting attention turned deadly serious in 1992 when he was shot after using his radio talk show to pillory the mob boss John Gotti. He escaped his would-be assassins by diving out a car window.

He confessed after the real attack that he had in the past concocted stories about the Guardian Angels’ feats, including foiling a rape and a fake story about Sliwa being kidnapped by Transit Authority police officers.

After making lewd and racist remarks on television and the radio about the leader of the City Council, he was briefly barred from a regular spot on a local television debate show. Sliwa later apologized for his comments.

Last summer, when Democratic Mayor Bill de Blasio banned swimming at the city’s beaches in an effort to stem the spread of the coronavirus, Sliwa staged a protest at Coney Island, first by sticking a cardboard cutout of de Blasio’s face on the beach and kicking sand on it. He then swam for about an hour, in a wetsuit and his red beret, ignoring the orders of city parks officers to get out of the water.

As a mayoral candidate, he has been true to form.

Sliwa holds near-daily news conferences around the city, often at day-old crime scenes where he decries the city's failed leadership. At one shooting not far from his apartment, he laid on his belly in the street, searching for a “smoking gun” under a car while television cameras rolled.

His campaign released videos purporting to show Sliwa and his Guardian Angels streaming into a Little Italy restaurant to separate and restrain unruly patrons.

Sliwa dismisses Adams as being out-of-touch and removed from the streets, and has hammered him for reports he vacationed in Monaco and held fundraisers in the Hamptons and Martha's Vineyard. He jumped on news reports questioning whether Adams really lives at his Brooklyn brownstone, walking across a bridge to Fort Lee, New Jersey holding a milk carton with the face of “missing” Adams.

Brooklyn Borough President Eric Adams is prohibitive favorite to be the city's next mayor. But there are new questions over whether he even lives in the city. Andrew Siff reports.

“It’s challenging for me to engage in a conversation with a person who acknowledged that they made up stories about crimes,” and is “doing antics every day,” Adams said in a recent radio interview.

“We’re going to have to endure the antics of a person that thinks that this is a circus for the four weeks, and I’m going to tolerate it because that’s the process,” Adams told WNYC. “But can we take Curtis Sliwa serious on anything, based on his history in this city?”