The deal would roll back broad powers granted to the governor in the early days of the coronavirus pandemic, while allowing executive actions critical to public health to remain in place

The deal made between New York's Assembly and state Senate earlier this week will reverse emergency powers granted to Cuomo exactly a year ago, in the early days of the COVID pandemic, that gave him free rein to order measures like quarantines. It will allow executive actions critical to public health to remain in effect while permitting other temporary emergency powers to expire on April 30, but Republican critics have argued the "bogus bill" doesn't go far enough.

The state Senate approved the bill 43 to 20 after several hours of debate Friday morning; the Assembly's debate continued into the evening, with the measure passing 107 to 43 just after 7 p.m. The bill now goes to Cuomo's desk for him to sign; he has stated previously that he supports the legislation.

Under the bill, Cuomo would still have the power to keep alive his existing COVID-19 rules or tweak them. But he’ll no longer be allowed to make decisions without any input from the Legislature. He’ll have five days to notify legislative committees and local governments and respond to their questions in certain circumstances.

Cuomo can bypass that five day notification requirement if he says it’s needed to avoid an “imminent threat to public health or safety.” He would still have to provide some opportunity for comment.

Where a local government in the state is exclusively impacted by an ongoing executive action, the local government's leaders will also receive notice and an opportunity to comment on the continuation or modification.

Fifteen days after the deal takes effect, all current suspensions and directives will be posted on the website of the governor in a searchable format, and include details on such suspensions and directives, including the public health and safety reasons any directives were extended or modified. Every 30 days after, the website will be updated to include responses to written comments or information requests from relevant committee chairs or municipal government entities.

It has been nearly a week since Gov. Andrew Cuomo last made a public appearance, and he faces increased pressure for him to resign after three women accused him of sexual harassment. NBC New York's Jonathan Dienst and Chris Glorioso report.

Senate Deputy Majority Leader Mike Gianaris defended the bill for ensuring that the mask mandate, for example, is still in effect. He said Cuomo couldn’t keep alive directives unrelated to reducing COVID-19 spread and administering vaccines, though it’s unclear whether Cuomo and lawmakers will agree on where to draw that line.

“Maybe my colleagues would prefer if all that went away and we just become Texas, where the governor declared there’s no more restrictions and everything,” Gianaris said. “That’s not what anyone wants ... so we’re being responsible.”

Republicans, who are pushing to impeach the governor and want a full repeal of his powers, said the governor’s alleged conduct has proven he’s not fit to wield emergency powers. They criticized the bill for lacking teeth and allowing Cuomo to extend COVID-19 mandates indefinitely, until the state of emergency is over.

"This is not what ending emergency powers looks like. But it IS what a three-way agreement looks like," Republican Assembly Minority Leader Will Barclay said Wednesday. He's among several lawmakers, both Democrats and Republicans, who have called on the governor to resign.

The changes come as Cuomo faces three worsening scandals -- accusations of sexual harassment by at least three young women, accusations of verbal abuse by legislators, and accusations of mismanagement in the handling of the pandemic in nursing homes. 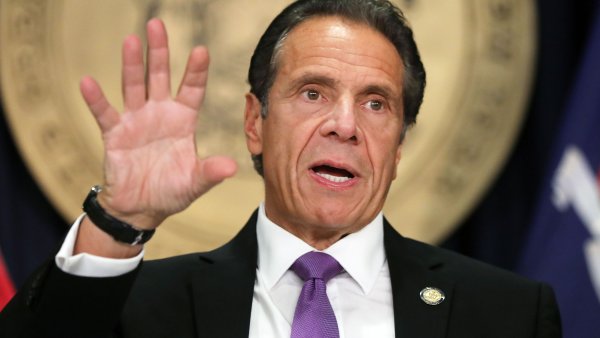 State Senator John Liu (D-Queens) said the agreement is less about retribution from the mushrooming scandals the governor is facing, and more about restoring the balance of power in Albany between the branches of government.

"I think, you know, to begin with an apology, and a recognition is extremely important. And we will see how things play out from them," Stewart-Cousins said Thursday. She said another accuser could be the last straw in her calling for his resignation.

The Cuomo administration now faces both an independent investigation into the sexual harassment issues overseen by the state attorney general's office, as well as a federal probe into the nursing home problems.

New York Attorney General Letitia James sent the governor's office a notice to preserve records related to the ongoing sexual harassment investigation. The preservation request, a relatively standard part of law enforcement procedure at this stage of an inquiry, was made for members of Cuomo's staff including aides, and includes electronic communications as well.

The preservation request from the attorney general came after attorney Debra Katz, who represents accuser and former Cuomo aide Charlotte Bennett, sent a letter to James' office seeking they ensure evidence related to the investigation is maintained. Katz wrote that her concern for the preservation of related items was "heightened by recent news reports that Governor Cuomo's top aides rewrote a government report to conceal the state's high death toll from COVID-19."

Katz also said in a release that two members of the Cuomo team, Chief of Staff Jill DesRosiers and Special Counsel Judith Mogul, failed in their legally required duty to report the governor's actions to the Governor's Office of Employee Relations for investigation after Bennett informed them of what she alleges happened. Instead, the attorney stated that Mogul "assured Ms. Bennett that because the Governor had only 'groomed' her for sex but had not 'actually' sexually harassed her, no investigation was warranted." Katz said that line of thinking is "a flat out falsehood," and a direct violation of Cuomo's own 2018 executive order.

James' office is expected to name a private attorney or attorneys sometime soon to conduct the inquiry and prepare a final public report.

It’s unclear what discipline Cuomo could face if the investigation confirms the accounts of three women who accused him of inappropriate touching and sexually suggestive remarks. Cuomo has said he never intended to make anyone feel uncomfortable, acknowledged he has a habit of kissing people’s faces and denied any inappropriate touching.

An impeachment would need to start in the Assembly. But Assembly Majority Leader Crystal Peoples-Stokes told The Associated Press Friday that she doesn’t believe the alleged conduct is an impeachable offense under the state Constitution and so impeachment is off the table.

Meanwhile, Senate Leader Andrea Stewart-Cousins said Thursday evening in a televised interview: “If any further people come forward, I would think it would be time for him to resign.”

One day after Gov. Cuomo issued an apology for his past behavior, one of his accusers said it was not enough, joining a growing chorus of officials saying he needs to be held accountable as the state attorney general is set to launch an independent investigation into the claims. NBC New York's Jonathan Dienst and Andrew Siff report.

Any governor in New York has the power to suspend laws in a state of emergency, but last spring, lawmakers approved Cuomo’s request for additional authority to pass sweeping mandates unilaterally. Republicans have long opposed the additional powers.

For the last year, executive orders have let Cuomo govern the state with little resistance, whether it was closing schools, mandating people work from home, restricting transit, or stopping (and then restarting, and stopping again, and then restarting again) indoor dining.

But as his problems deepened, so did calls for the legislature to regain a measure of control by stripping the emergency authority.

“A year into the pandemic, and as New Yorkers receive the vaccine, the temporary emergency powers have served their purpose – it is time for them to be repealed,” Assembly Speaker Carl Heastie said. “These temporary emergency powers were granted as New York was devastated by a virus we knew nothing about. Now it is time for our government to return to regular order.”

In a Wednesday press conference, Cuomo claimed he negotiated the bill with the Senate and Assembly.

But Gianaris and Assembly Speaker Carl Heastie have both said that was false, with Gianaris saying on Friday that “the governor lied” about that.