In a big move for the gambling world, mobilized sports betting would be legalized in the deal, which also includes comprehensive nursing home reforms

New York Gov. Andrew Cuomo and members of the state Legislature announced Tuesday that they had come to an agreement on a budget for the 2022 fiscal year, with major focus and funds going toward schools, green initiatives, rent relief and child care, the governor's office said.

The agreement, which was announced by Gov. Andrew Cuomo, Senate Majority Leader Andrea Stewart-Cousins and Assembly Speaker Carl Heastie, earmarks what they called a "record" $29.5 billion for schools — a $3 billion increase from the previous year. There was nearly as much set aside for public and private green economy investments, according to the governor's office. 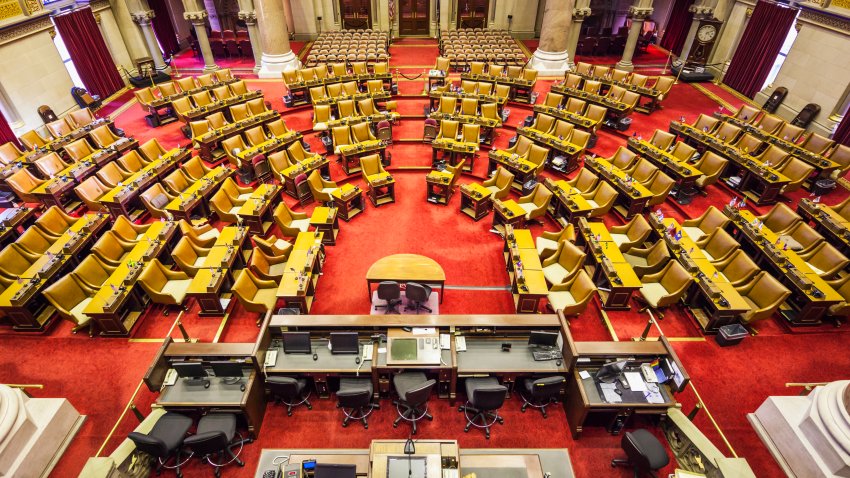 They also said the deal includes a plan to make broadband internet affordable for all, an initiative they said was a first in the U.S.

The Legislature and governor waited until late Tuesday to release specifics to the public about some of the most contentious parts of the budget, from a tax hike on millionaires, to an agreement to legalize mobile sports betting, to a $2.1 billion fund for undocumented immigrants and other workers who have been excluded from COVID-19 assistance.

"New York was ambushed early and hit hardest by COVID, devastating our economy and requiring urgent and unprecedented emergency spending to manage the pandemic," Cuomo said in a press release. "Thanks to the State's strong fiscal management and relentless pursuit to secure the federal support that the pandemic demanded, we not only balanced our budget, we are also making historic investments to reimagine, rebuild and renew New York in the aftermath of the worst health and economic crisis in a century."

Of the $212 billion budget (a nearly 10 percent increase from last year), more than half ($111 billion) goes toward state operating costs. The increase is due in part to extra federal COVID-19 relief that New York won’t get again next year, including an expected $12 billion for state government alone. Freeman Klopott, Cuomo budget office spokesperson, said state spending alone will increase 3.8 percent under the budget if that extra federal funding is excluded.

Additionally, both child care and rent relief have $2.4 billion set aside to cover those issues, and $1 billion is going toward small business recovery.

"Many of the deep issues that have been exposed by this virus existed in our society beforehand. That’s why, so much during this past year we acknowledged the need for a reckoning and this budget is a reflection of that reckoning," Stewart-Cousins said. "This budget represents the light at the end of the tunnel, and shows us a path forward that will lead New York State through this pandemic and beyond."

In a big move for the gambling world, mobilized sports betting would be legalized in the deal, the governor's office said. It also addresses a major issue that has been plaguing the governor for months now, as it implements comprehensive nursing home reforms. The Cuomo administration has been accused of misleading the public regarding COVID-19 deaths in nursing homes last year.

While legalizing the mobilized sports betting was part of the announcement, no further details were released. The same goes for other, more contentious parts of the budget.

The governor's office said that the proposed budget closes the deficit, and invests in the ongoing response to the pandemic and recovery efforts.

"I am proud of the strides we have made in funding our schools, helping businesses rebuild, and protecting New York's most vulnerable. Working and middle-class taxpayers will receive the relief they desperately need, while the wealthiest New Yorkers will help their neighbors," Stewart-Cousins said.

Mike Murphy, spokesperson for Stewart-Cousins, said the language of the revenue bill should be released online by in the evening, with votes expected later in the night.

Heastie praised the budget as the most "far-reaching and impactful" he had seen, and the Legal Aid Society said of the rent relief program that, "if implemented correctly, will be lifesaving for hundreds of thousands of New Yorkers across the state." However, others were not so supportive.

"New York’s proposed budget has gone from bad to unsustainable, while the progressive-left cheers and says it will help working families in New York State. Nothing could be further from reality," said Gerard Kassar, the Chairman for the Conservative Party of New York State. "By adopting new increased taxes on those who are wealthy and on corporations, NYS Government is encouraging an even greater exodus from New York by those who can leave and forcing corporations to escape to states that are tax-friendly, thereby taking New York jobs with them."

New York tax revenues are rebounding faster than expected, Congress has sent billions to New York over the past year and Cuomo has reduced state spending by at least $1.7 billion since last spring. That’s all helped New York balance its budget.

But Cuomo and Democrats want to give a jumpstart to an economy still hit by job losses from the COVID-19 pandemic. Employment in New York is still more than 1 million jobs below pre-pandemic levels, with fewer than half of lost jobs recovered so far, according to DiNapoli.

The governor has long prided himself on getting the budget passed on time and trying to keep spending increases minimal. Lawmakers passed a budget on time last spring amid the pandemic, when the Assembly and Senate didn’t offer their own spending proposals.

But this year’s budget delay means thousands of state workers are now facing the prospect of having to wait at least a day longer to receive paychecks: at least 39,000 state employees are expecting a paycheck Thursday.

Marina Villeneuve of the The Associated Press contributed to this report.