High-ranking members of the state's Health Department were reportedly directed by Cuomo and Health Commissioner Dr. Howard Zucker to conduct the highly in-demand tests on relatives of the governor and other powerful officials

Gov. Andrew Cuomo had members of his family get prioritized, special access to COVID testing during the early stages of the pandemic last year, according to a report.

The Times Union of Albany reported Wednesday that the governor's brother, mother and at least one of his sisters were among those who were tested by top Health Department officials. Some of them were tested several times, the newspaper reported.

Those high-ranking members of the state's Health Department were directed by Cuomo and Health Commissioner Dr. Howard Zucker to conduct the highly in-demand tests on the relatives and other powerful officials, such as Port Authority Executive Director Rick Cotton and head of the MTA Pat Foye, along with their wives, the newspaper reported. 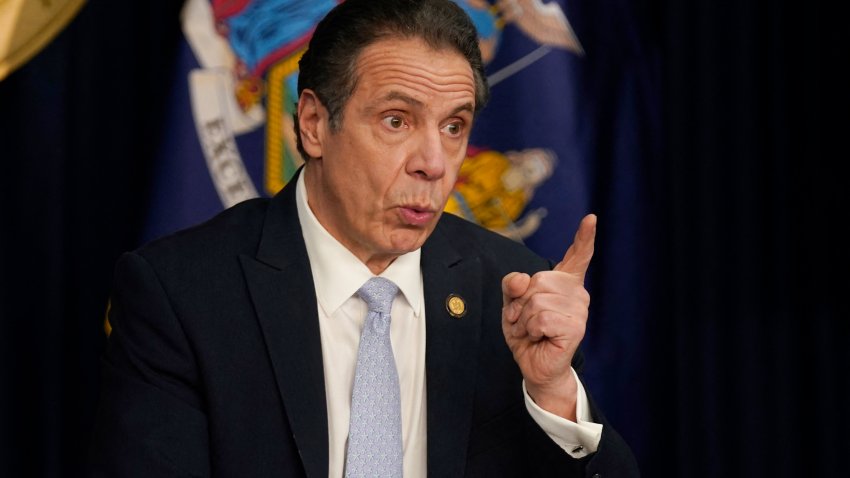 Dr. Eleanor Adams, a special adviser to Zucker, tested the governor's brother, Chris, at his Long Island home with the help of a state police-driven delivery, according to sources the newspaper cited. A spokesperson for the state police said that there was "nothing extraordinary" about troopers transferring samples at the time, in fact it was fairly common.

"During the first weeks of the pandemic, troopers transported thousands of samples from around the state to Wadsworth for testing," the spokesperson said.

The governor did not address the allegations on Wednesday or Thursday. His office said that the claims are "insincere efforts to rewrite the past," according to senior adviser Richard Azzopardi.

"In the early days of this pandemic, when there was a heavy emphasis on contact tracing, we were absolutely going above and beyond to get people testing -- including in some instances going to people’s homes– and door-to-door in places like New Rochelle -- to take samples from those believed to have been exposed to COVID in order to identify cases and prevent additional ones -- among those we assisted were members of the general public, including legislators, reporters, state workers and their families who feared they had contracted the virus and had the capability to further spread it," Azzopardi said in a statement.

A report says members of Gov. Cuomo's family were given priority for COVID-19 testing during the early days of the pandemic, when such testing was scarce. Marc Santia reports.

However, some Cuomo opponents said it's more of the same kind of behavior from the embattled governor.

The old adage ‘the higher you climb, the harder you fall’ is especially true when, as is the case with New York Governor Andrew Cuomo, the climb is up a mountain built on death and cover-ups, intimidation, abuse and deceit," Rep. Lee Zeldin said in a statement. "This latest report of prioritizing his family members for COVID testing at private residences conducted by state Health Department officials and having their tests moved to the front of the line at Wadsworth adds to a very long list of reasons why Cuomo’s Gotta Go.”

New York City Mayor Bill de Blasio, a frequent Cuomo critic, said it is "another matter that needs to be looked into, but as much as it raises questions, it pales in comparison to the nursing home scandal."

Watchdogs like John Kaehny of Reinvent Albany said the alleged preferential delivery of COVID tests to those close to the governor violates the Public Officers Law, part 74 section D, which states: "No officer or employee ... should use or attempt to use his or her official position to secure unwarranted privileges." Kaehny said it is a "clear violation and and an issue of resources not supposed to be allocated at the governor's whim for relatives."

The state attorney general's office said Thursday that the reports are "troubling," but they did not "have jurisdiction to investigate this matter." They said the state's Joint Commission on Public Ethics should look into the issue, however.

It is far from the only problem the Cuomo administration is facing, even as the governor tries to focus his attention on the state budget and the ongoing pandemic. On Wednesday, he declined to say what his office is doing to ensure a safe work environment for two female aides who have accused him of sexually harassing or groping them.

Speaking to reporters from his Manhattan office, Cuomo said “there are rules” about how employers are supposed to handle such complaints, then turned to his special counsel, Beth Garvey, to elaborate.

“Certainly every individual who comes forward and makes a complaint is protected from retaliation and we are making sure that occurs in this case as well,” Garvey said.

They didn’t answer a question about whether the women were working from home or offer specifics on how the situation was being handled.

State and federal law protects employees from retaliation, like being fired or demoted, for complaining about harassment.

As the governor continues to face political pressure to resign, it appears his public support is slipping as well, with a new poll showing a lower percentage of New Yorkers wanting Cuomo to stay in office than a different poll showed just two weeks ago. NBC New York's Jonathan Dienst reports.

Several women who worked for Cuomo have accused him of making inappropriate comments about their looks, giving them unwanted hugs or kisses, or making comments they interpreted as gauging their interest in an affair.

Among them are two aides who still work in the governor’s office. One, who has yet to speak publicly, reportedly said the governor groped her at the Executive Mansion last summer. Another, Alyssa McGrath, said Cuomo looked down her shirt and made suggestive remarks to her.

The governor has denied touching anyone inappropriately but said he’s sorry if he made anyone uncomfortable.

He insisted Wednesday, in response to a reporter’s question, that the scandal and ongoing investigations by the state attorney general and state Assembly were not interfering with his ability to govern.

“The reality is the exact opposite,” he said.

McGrath’s lawyer, Mariann Wang, said it was vital that “the governor and his office allow the attorney general’s lawyers to do their work without interference, and take no action against any victim or witness who has come forward.”

“Ms. McGrath has always feared retaliation given the history and public reports of how prior complaints have been handled. There’s every indication that the “rules” that the Governor now invokes were not applied to protect those women,” she said.